Bird's nest is renowned for its incredible benefits that has been used for centuries in China. Let's break down the healing properties of this ancient health tonic. 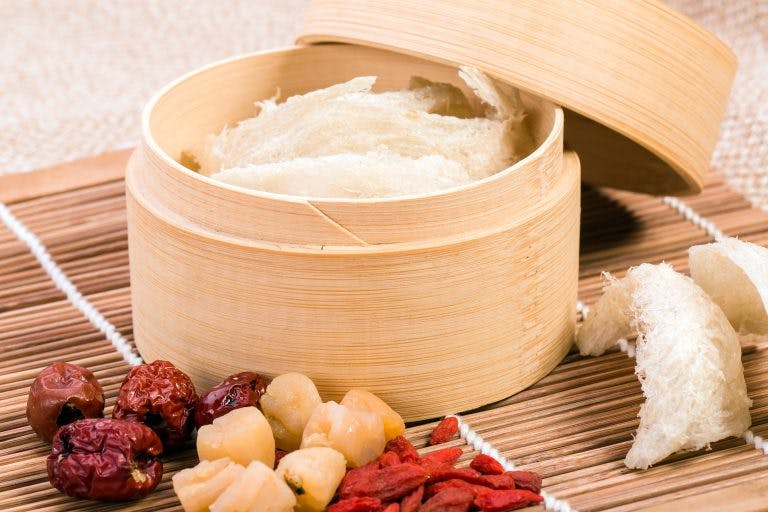 Have you heard of an edible bird nest? Most Americans haven’t. Edible bird nest (EBN), or “Caviar of the East,” as it is sometimes called has been around for centuries. Interestingly, the 17th century classic Chinese Materia Medica, or the history of pharmacy, first recorded bird’s nest for Traditional Chinese Medicine (TCM). It was used by royalty to treat skin ailments.

Made from a saliva-like secretion produced by swiftlets, a bird’s nest is a delicacy that can benefit everyone. It can reduce fatigue, improve skin health, increase immunity, and increase the number of red blood cells, to name a few benefits.

The History of Edible Bird Nest

Legend has it that when Chinese admiral and explorer Zheng He — also known as Cheng Ho — and his crew returned to China, he brought back edible bird’s nest as a gift for the Ming Emperor.

Zhang Xie’s book Study of Eastern and Western Seas also has more than 10 entries about bird’s nest (yan wo). It describes sea swallows made the bird’s nest by consuming seaweed and regurgitating them. Found high in rock caves, these swallows can float on seawater and ride the waves.

Today, the nests are found in caves and farms, mainly located in Vietnam, Malaysia, Thailand, and Indonesia. The health properties throughout the years remain the same. Today, we know this is related to its composition of glycoprotein, calcium, sodium, potassium, and carbohydrates.

What You Need to Know About Edible Bird Nest

1. It can treat malnutrition

Around 1% of children suffer from malnutrition in the U.S whereas 663 million people suffer from undernourishment globally. Reports from Malaysia claim that bird’s nest can treat malnutrition and improve the metabolism rate. It is rich in antioxidants called ovotransferrin and lactoferrin, which stop free radicals from invading the body.

2. It has numerous healing properties

The viscous mucus that forms the nests contains glycoprotein and sialic acid. These can contribute to immunity. The mucus is also high in growth factors and has a neutral energetic property that promotes immunity. Together, these components give a bird’s nest its health benefits.

Moreover, thanks to the proteins and nutrients found inside, bird’s nest has long been a favorite of patients recovering from illnesses such as asthma, chronic coughs, and other respiratory-related health problems.

Edible bird’s nest, a health delicacy renowned for its health benefits, also exhibits interesting therapeutic effects, such as anticancer, anti-aging, cough-suppressing, anti-tuberculosis, and speeding up the recovery from illness and surgery. However, there are no extensive studies on this currently in the U.S.

3. Edible Bird Nest is for all

Bird’s nest is known to get rid of phlegm and treat dry cough. It can also combat fatigue, increase appetite, improve digestion, and induce bowel movement.

Its proteins and minerals also work as a growth and immunity supplement for children. It also improves kidney and spleen function in men. It also boosts men’s sexual performance. For postmenopausal women, it can increase bone mass and slow down the aging process.

4. It has beauty benefits

Bird’s nest contains epidermal growth factor (EGF) that repairs tissue and rejuvenates the complexion. Called a “beauty food,” it improves the texture of the skin and slows down the aging processes. Additionally, the texture of the bird’s nest is gelatinous and aids with the regeneration of collagen.

Some people believe that farmers harm the swiftlets during the harvesting process and that their blood has caused the nest to turn red. However, this is untrue as farmers harvest abandoned nests. Thus, the redness in a red bird’s nest does not come from blood but oxidation or minerals from its environment.

In fact, the vapor from bird soil contains reactive nitrogen species like nitrous acid. This is naturally made through the bacterial decomposition of the soil. After this, nitrous acid reacts with tyrosine — a type of non-essential amino acid — in the mucin glycoprotein of edible bird’s nest and causes the change from white to red color. Be aware of adulterated products which may have added artificial coloring to receive a higher price. Always purchase bird’s nest from reputable retailers.

6. It has immune-boosting benefits

Bird’s nest is an immune-enhancing food. Interestingly, studies conducted in China in mice have shown that EBN reduced the side effects of an intestinal immune injury. This is caused by chemotherapy, which is a form of cancer treatment.

How to Enjoy Edible Bird Nest

Bird’s nest, however, takes a long time to prepare. You should only purchase high-quality bird’s nest products. Some people claim that it tastes bland, but this only applies to lower-quality options. A good quality bird’s nest has a flavor similar to an egg white.

You can now conveniently find bird’s nest in many shapes and forms, from a ready-to-consume tonic to a bird’s nest drink. Enjoy it as a soup prepared via a doubling boiling method.

It is best to consume bird’s nest before meals to allow the body to absorb its nutrients. Be extra cautious when consuming the nest for the first time, as it can cause allergic reactions in rare cases.

As you can see, everyone can benefit from consuming edible bird’s nest. With numerous benefits, this healing tonic can be a wonderful part of your healthy diet.

Thank you Peter. Hope you and your loved ones can enjoy the goodness of Edible Bird Nest too!

Discover the immune-boosting benefits of consuming these natural products, as suggested by many Traditional Chinese Medicine practitioners.

Reishi mushrooms have been used for centuries. Renowned for its health benefits, this mushroom can improve overall health and boost the immune system.

Incredible Mulberry Leaf Benefits You Need In Your Life Now

Mulberry leaf is an excellent supplement to take if you're looking to support brain, immune, and general health. Read on to learn more about the amazing benefits of this medicinal shrub here.

How Can the Amazing Goji Berry Benefit Your Health?

Goji berries have been enjoyed as a medicinal herb and food supplement for centuries. A rich antioxidant, more Americans are taking it to reap its many benefits.