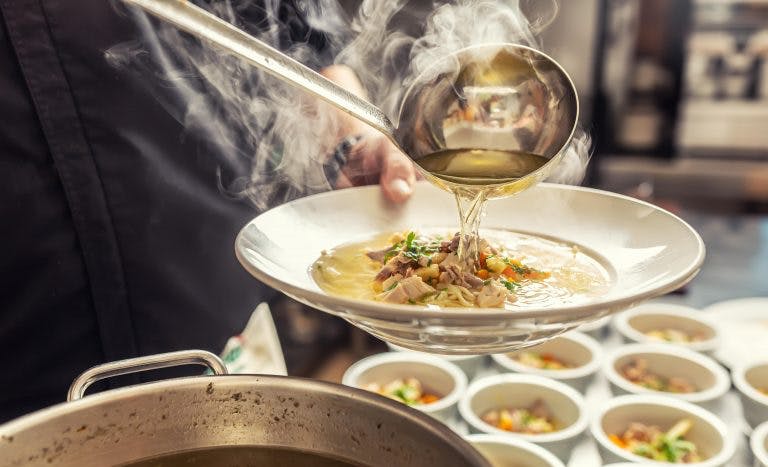 Chicken is one of the most widely used cooking ingredients. It can be added to just about any dish, ranging from stir-fries to soups.

You can even sip on it warm like hot tea when you are feeling sick to stay hydrated and nourished.

But what if there were something healthier than chicken broth that you could be using in your recipes?

In many ways, is superior to chicken broth, and can be used in place of it to enhance your dishes.

In this article, we’ll introduce you to chicken essence. You’ll learn what it is, its nutritional value, and how to use it to support your health.

What is the Essence of Chicken?

Essence of chicken is an advanced version of chicken broth. It has undergone a complicated process involving high-temperature extraction, centrifugation, vacuum concentration, and sterilization.

According to Traditional Chinese medicine (TCM), chicken is thought to warm the Spleen and stomach. It can also nourish , and tonify the Kidneys. It is traditionally known to heal fatigue and weakness, improve appetite and diarrhea, and increase breastmilk supply.

The health properties of chicken have been lauded for more than 100 years. In China’s Ming Dynasty, black chicken was the main ingredient in Wu Ji Bai Feng pills.

Over time, essence of chicken became more practical to suit modern lifestyles. It has become a product known and loved, especially by people in Southeast Asia.

Several studies on essence of chicken have discovered that it contains valuable nutrients such as proteins, vitamins, minerals, trace elements, peptides, amino acids, and many more.

However, the two most important substances are anserine and carnosine. Both compounds are rich in antioxidants, giving the essence of chicken its value.

Health Benefits Of Essence Of Chicken

For generations, essence of chicken has been hailed for its numerous health benefits.

Studies have discovered that it consists of a long list of nutrients. It is why chicken essence for elderly people is especially popular.

Here are some benefits of the essence of chicken:

A 2014 study revealed that it can help decrease physical fatigue and injury-related biomarkers. At the same time, it can increase tissue glycogen, an essential energy source.

Have you ever had difficulty concentrating and solving problems? Are you feeling anxious, easily irritated, or confused? Losing sleep and your interest in everything you like?

You’re probably suffering from mental fatigue. A 2013 study conducted a test on 20 men and concluded that a daily intake of it is effective to recover the effects of mental fatigue.

On another note, pure chicken essence is suitable for children, pregnant women, and postpartum mothers to aid mental fatigue and beyond.

The Essence of Chicken in TCM

With over a century of history in TCM, physicians use this to improve the Spleen and stomach’s digestive function, since the texture is easily absorbed.

TCM also thinks that the essence of chicken can improve (vital energy) and Blood circulation.

Chicken Broth vs. Essence Of Chicken

The answer depends on how you plan to use it. is used primarily in supplement form. It’s recommended that you drink it each morning for optimal health.

On the other hand, chicken broth is commonly added to soups as a base ingredient. It’s not usually consumed as a supplement to your diet.

However, you can absolutely use essence of chicken instead of chicken broth in your favorite recipes. Doing so enriches the nutritional value of your dishes.

The benefits of essence of chicken are far from a myth. In fact, science has provided many reasons why it’s part of a tradition that is passed down for more than 100 years.

From a Ming Dynasty-era medicine to the product we see today, essence of chicken has grown and adapted perfectly to meet the needs of modern people.

How TCM Can Improve Your Health

Explore the basics of Traditional Chinese Medicine. Plus, find out how you can incorporate TCM practices into your daily life.

5 Benefits Of Lemongrass Plant And How To Use It

The lemongrass plant is ideal for supporting digestive health, aiding in postpartum care, and even reducing stress and anxiety. Here's how to use it.

No two rashes are alike, meaning that you can't assume all rashes have the same treatment options. Learn the different types of rashes here and how to best treat them using natural remedies.

Reishi mushroom contains numerous compounds that boost immune function, but not all supplements are created equally. Learn what to look out for in this article.