Measles Rash Or Chickenpox? Understanding The Difference And Remedies

Are those red, itchy bumps a measles rash or chickenpox? Learn the causes, symptoms, and treatment options for each infectious disease here. 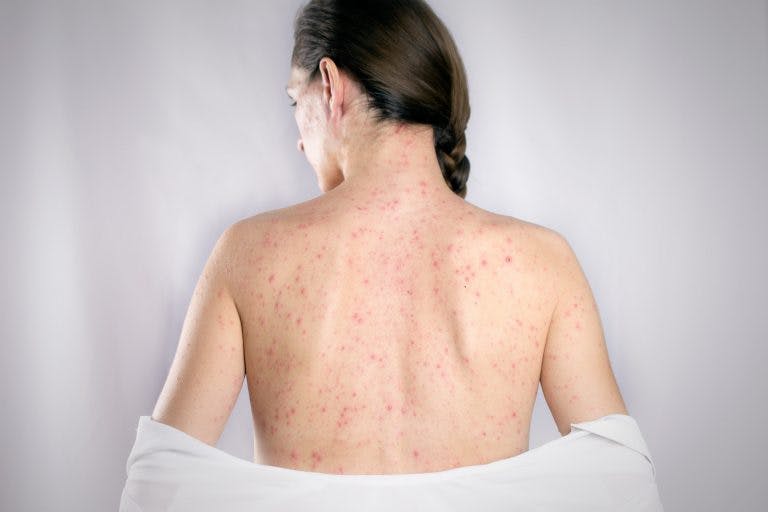 A measles rash and chickenpox have several things in common. They are both highly contagious and caused by viruses.

However, because each condition can present with similar symptoms, it can be hard to know which one you have.

In this article, you’ll learn how to spot the difference between a measles rash and chickenpox, and treatment options to alleviate the skin discomfort.

Both conditions tend to be common during childhood. However, thanks to vaccinations, the number of cases are down in the United States. Despite this, chickenpox tends to be more prevalent than measles.

In Traditional Chinese Medicine (TCM), it is believed that measles and chickenpox are caused by invasion of external seasonal pathogens causing toxic heat in the body, which manifests as skin lesions.

Symptoms of Measles Rash and Chickenpox

Measles rashes usually begin as flat red spots that appear on the face then spreads downwards to the neck, trunk, arms, legs and feet. The spots may join together as the rash moves down the body. White spots (known as Koplik spots) in the mouth may be observed.

A chickenpox rash is an itchy red rash that usually starts on the belly or back and face before spreading to the rest of the body. It starts as many small red bumps that develop into thin-walled blisters filled with fluid. These bumps then break and crust over to become dry, brown scabs.

Symptoms of a measles rash may include:

Symptoms of chickenpox may include:

How To Tell The Difference Between Measles Rash and Chickenpox

Both conditions may cause a rash to develop. However, the measles rash tends to be appear as flat bumps that do not have fluid in them.

Meanwhile, the chickenpox rash tends to start with raised bumps that turn fluid-filled before breaking and leaking.

Can I Still Get Measles or Chickenpox After Vaccination?

In the United States, children are vaccinated against measles and chickenpox with the Measles, Mumps, Rubella, and Varicella (chickenpox) MMRV vaccine. The vaccine is given in two doses to reduce side effects.

However, according to the Centers For Disease Control and Prevention (CDC), it is rare but possible to get measles or chickenpox if you have been treated with two doses of the vaccine. The CDC notes that your symptoms may not be as severe if you have been vaccinated.

Treatment Options, According to TCM

TCM has long been used to treat both conditions. According to TCM Physician Anita Pee, “In China, there is mention of measles in ancient literature since the 3rd century. It has been recognized as a highly infectious disease since the 11th century.”

She continued by saying, “It caused massive outbreaks and was one of the leading cause of death in children before the introduction of vaccines. As for chickenpox, it was first mentioned in TCM literature in the 12th century.”

The main treatment method for measles and chickenpox was to use traditional herbs for internal use and external application. Modern TCM treatments are the same.

For internal treatment, in the early stages of measles, herbs like Bo He (peppermint) and Niu Bang Zi (Fructus Arctii) can be used to dispel wind-heat.

TCM treatment for chickenpox depends on the severity. For mild cases, herbs like Jin Yin Hua (honeysuckle) and Lian Qiao (forsythia fruit) can be used to clear heat in the body.

For more severe cases with blisters and high fever, herbs like Sheng Di Huang (rehmannia root) and Xuan Shen (figwort root) can be used to clear heat and cool blood. Herbs such as Ku Shen (sophora root) and Fu Ping (Herba Spirodelae) can be used for external wash to relieve itch and reduce chickenpox blisters.

According to physician Pee, “In terms of the types of herbs used and treatment methods, it is the same for both children and adults. Adults often have more severe symptoms compared to children so the dosage for adults will likely be much higher. For children below age 7 and in the recovery phase, we may also do pediatric tuina for faster recovery and to aid appetite and immunity.”

Physician Pee continued, “For both measles and chickenpox, it is important to get plenty of rest and drink enough fluids. It’s also important to relieve itch and prevent scratching so as to prevent infections.”

Other than external application of herbal wash, calamine lotion can also be used to soothe itching or press a cool wet cloth to the skin to relieve itch. After recovery from the illness, Chinese herbal remedies can help in strengthening the body and to boost the immune system. However, it’s advisable to seek medical treatment if your symptoms become worse or do not get better.

Quiz: Do You Have Pink Eye or Dry Eye?

Don't keep rubbing your eyes! The redness you see in your eye can be a sign of pink eye infection. Take this quiz and find out the answer!

Keep your family safe from illnesses like COVID-19 with immune system booster. Check out the dietary supplements and herbs that you can try.

A vitamin D deficiency could make it harder for you to get over the common cold. It may also cause fatigue, depression, and joint pain. Here's how to correct those symptoms.

Your health conditions, age, lifestyle, and family history can increase your risk of getting heart disease. Find out if you are at risk by answering this quiz.