Is Ayurvedic Medicine The Same As TCM?

Ayurvedic medicine is a great addition to your natural wellness routine. This guide explains where it came from, how it's similar to TCM, and how to incorporate it into your life. 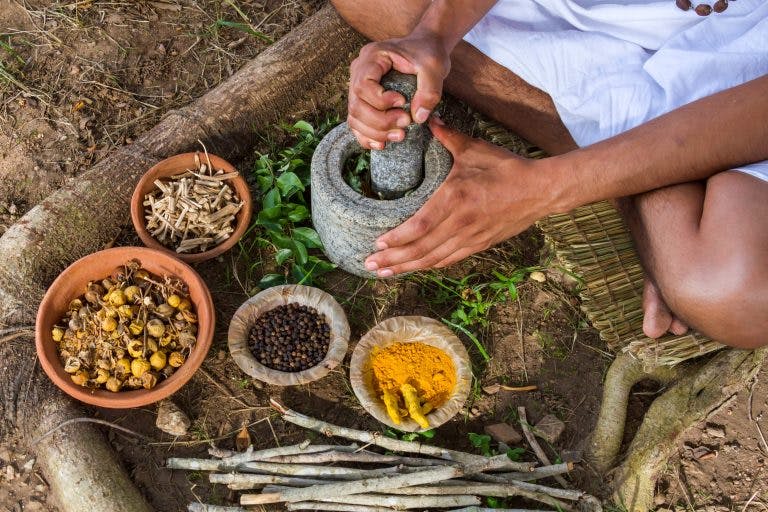 If you’re looking for a more natural way to support your health, then medicine and Traditional Chinese Medicine (TCM) can help.

Although both are complementary and holistic therapies, there are a few key differences to be aware of.

In this guide, we’ll introduce you to Ayurvedic medicine and how it’s both similar and different from TCM to help you decide which is best for your lifestyle.

What Is Ayurvedic Medicine?

Originating in India, the word “Ayurveda” comes from Sanskrit and means “knowledge of life.” People in India have been practicing Ayurvedic medicine primarily for thousands of years. It is based on the concept that imbalance in a person’s constitution (Prakriti) and life force or humor (dosha) leads to illness.

The therapy mainly involves lifestyle adjustments, aided by herbal remedies, massage therapy, yoga, and meditation. These are used to restore balance to the patient’s physical and emotional states.

On the other hand, TCM, as the name suggests, originated in China. The TCM approach to therapy is significantly different from Ayurvedic medicine. It also has a long history of usage and supports the notion that a balanced constitution is key to well-being.

In TCM, there are many ways to tackle imbalance: imbalance of the organs, imbalance in Qi (vital energy) and Xue (Blood), imbalance in the five elements, Yin and Yang, and so on. A TCM practitioner may decide which approach to best implement during therapy.

More often than not, no one approach is superior to another. The accuracy of diagnosis and the corresponding appropriate treatment determine treatment efficacy.

What Are Doshas In Ayurvedic ?

First, let us look at the underlying concept behind Ayurvedic measures to promote health. In Ayurveda, a person’s constitution has unique ratios of the three doshas: Vata, Pitta, and Kapha. One or two usually take precedence.

A person with dominant Vata has more air and space elements. He is also prone to mood changes, appetite, and digestive issues. To overcome an excess of Vata, one should consume warm foods and drinks while managing their emotional well-being through meditation and other relaxing activities.

Whereas for Pitta-dominant people, elements of Fire and Water mean that they are usually athletic, have a fast metabolism, sensitive to heat, and are prone to acne, inflammation, as well as mood swings. They should avoid spicy food and aim for equal work and leisure.

For those with dominant Kapha, the abundance of Earth and Water is usually denoted in a strong, thick-boned constitution. Having slower metabolism, Kapha-dominant people should focus on regular exercise and sleep routine accompanied by a healthy diet that keeps their bodies warm.

“Different elements can cause the same ailment in people with different doshas,” explains Anna Natalya, who has been practicing Ayurveda since 2009.

Is The Five Element Theory In TCM?

TCM has a robust system based on empirical use. Over the years, practitioners and researchers have developed many treatises from which TCM’s body of knowledge continues to expand, including into denominations such as Traditional Korean Medicine.

The Five Element Theory is one of the main concepts of TCM. All things in this theory can be categorized. One of the earliest applications of this theory in TCM is in the classic text, Huangdi Neijing. Another important guiding theory in TCM recorded is the Yin and Yang theory.

In TCM, treatment involves identifying disease symptoms and diagnosing an excess or deficiency of one or more elements in a patient’s organs, meridians, or emotions. They are all interconnected.

Thereafter, a tonifying or sedative therapeutic measure (often used in conjunction) corresponding to the element imbalances can be administered via acupuncture, herbal concoction, exercise techniques, or a combination of all three.

As with Ayurvedic medicine, physicians will customize treatments based on each patient’s unique body composition. For example, the same TCM prescription may apply for different ailments (headache and fever due to Yin ) because they involve addressing the same element imbalance (tonifying Yin).

Conversely, the same ailment may require different prescriptions in two patients because of the variable factors in each patient’s health condition.

For both Ayurveda and TCM, it’s a common practice to use herbal remedies to regulate the body. Physicians also use them to improve a body’s well-being and balance, as it is the most accessible therapeutic solution for most people.

TCM herbal concoctions typically consist of a mixture of herbs prescribed by a TCM physician. In contrast, Ayurvedic therapeutic solutions might involve abhyanga or massage using essential oils. Physicians will usually pair them up with a recommended diet and herbal remedy.

One common herb used in both disciplines is turmeric. People usually consume it to regulate inflammation in the body and maintain general good health. You can have the best of both worlds with Teramin, which contains Curcumin. It is an antioxidant derived from turmeric through modern technology. It can be integrated into traditional trusted herbal solutions with the convenience of modern medicine.

Other high-antioxidant supplements commonly used in TCM include Cordyceps, Lingzhi Cracked Spores, and Ginseng tea. Herbal soups are also popular in TCM as they are easy to administer and have numerous health benefits.

As always, we recommend consulting a licensed Ayurvedic medicine or TCM professional for a more in-depth evaluation. They can provide you with the best recommendation to lead your best holistic lifestyle.

Debunking Old Wives Tales: Which Are True About Winter Illnesses?

Have you ever wondered if there is any truth behind common old wives tales? Our TCM physician weighs in on some alternative ways to protect against winter illnesses here.

Celiac disease symptoms can be sneaky. Some might not even start in your gut! Learn how to spot the symptoms here as well as natural ways to manage them.

Tips To Help Protect Your Skin Against Sun Poisoning

Sun poisoning refers to a very severe sun burn that is often accompanied by dehydration. Complications can be life-threatening. Here's what to do if you think you may have it.

How Can A Foot Bath Improve Your Health?

Don't neglect your feet! These foot bath benefits will have you sleeping better at night and feeling less stressed after a long day.

The tips in this article can help you better manage your chemotherapy side effects so the treatment is more manageable. Check them out here.