Health Benefits Of Black Rice And Other Dark Foods

If you commonly eat brown rice or lighter colored goods, then it's time to try black rice. Learn more about the amazing health benefits of black foods here. 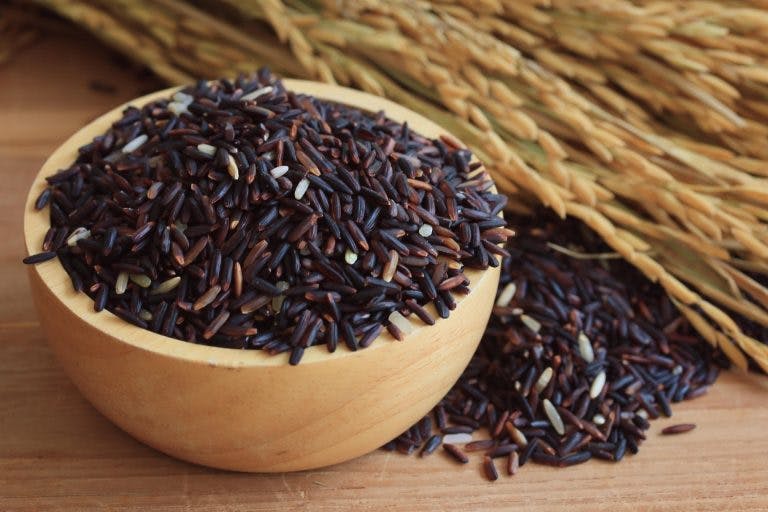 Black and other dark-colored foods play an important role in Traditional Chinese Medicine (TCM) due to their holistic properties.

However, these foods tend to take a backseat to brighter-colored fruits and vegetables based on their appearance alone.

In this guide, we’ll explain the many ways adding black rice and other dark foods to your diet can improve your health.

Health Benefits Of Black Rice And Other Black Foods, According To TCM

In the Five Element Theory of TCM, each element relates to a natural aspect. These aspects are color, taste, emotions, seasons, sensory organs, and yin (passive energy) and yang (active energy) organs.

The Water element is associated with the Kidneys. Subsequently, the Kidneys connect to the color black. Hence, black-colored foods are believed to have a direct effect on the organ system.

“The Kidney is responsible for storing jing (essence), which determines our health and vitality. It also governs birth, growth, reproduction, and sexual health. As such, it’s important to ensure that our Kidneys are healthy and functioning optimally. Consuming black-colored foods can strengthen the organs and protect them,” explains TCM Physician Vong U Chan.

A native of Southeast Asian cuisine, you can also mix it with white rice or other grains to balance out its flavor and texture. The fiber in black rice is especially helpful in preventing bloating, constipation, and other digestive disorders. It’s abundant with vitamin E, which can boost the immune system and fend off .

It’s also capable of metabolizing cholesterol and lipids and inhibiting from triggering skin diseases. Tyrosinase affects the pigment (known as melanin) in your skin. Separately, physicians use black rice in TCM to nourish the Spleen, strengthen the Liver and Kidneys, regulate a person’s appetite, and improve vision and blood circulation.

Dark-colored lentils are low-fat but have high amounts of fiber. The fiber content of this ingredient can aid weight management by suppressing appetite. Meanwhile, the tannins – a type of phytochemical – in black lentils may halt the growth of cancer cells. It’s also a healthy source of:

The consumption of one cup of black lentils can have a remarkable effect on regulating cholesterol, triglyceride, and blood sugar levels.

Black garlic has a sweet, syrup-like taste. It also has hints of tamarind or balsamic vinegar. To achieve this unique combination of flavors, the ingredient it’s fermented in a controlled environment over several weeks. Though, it’s not only highly sought after for its ability to enhance the taste of dishes like Bak Kut Teh, but also for its therapeutic benefits.

In fact, multiple studies have found that black garlic contains more than 100 active compounds. These include an antioxidant called S-allyl-cysteine, which helps prevent aging and damage to the cells. Consumption of the ingredient also helps increase HDL cholesterol levels. This cholesterol type can minimize a person’s susceptibility to cardiovascular disease.

This versatile ingredient can be used in baked goods like mooncakes or combined with oats and milk to prepare a breakfast meal. Black sesame seeds are rich in calcium, magnesium, vitamin B1 (thiamine), and dietary fibers.

It has many medicinal uses and plays a significant role in lowering a person’s risk of cardiovascular conditions. Black sesame seeds also have protective effects on the kidneys, and against neurodegeneration, osteoporosis, and chronic liver injury. Studies also exhibit the antioxidant, anti-aging, anti-cancer, anti-inflammatory, and anti-tumor properties of the ingredient.

According to Physician Vong, she often uses black sesame seeds in her clinical practice. She prescribes the ingredient to patients who present with constipation and Blood Deficiency. As black sesame seeds are mild in nature, they also have the ability to nourish blood and lubricate the Intestines, plus helping with premature greying of hair.

TCM favors the use of black fungus for its ability to promote positive emotions and treat Liver, Lung, and Stomach conditions. It can also help avert hemorrhoids, remedy Dryness, encourage blood circulation and reduce cholesterol levels.

You can eat black rice and dark-colored foods daily. However, it’s necessary to moderate the amount consumed. Do speak to a TCM practitioner if you’re unsure about the suitability of specific ingredients, particularly if you experience symptoms like diarrhea after consumption.

How To Use Sea Buckthorn For Beautiful Skin

Sea buckthorn contains properties that fight acne and winkles, boost skin's hydration, and even supports women's health. Read more about how to use this amazing fruit here.

Discover the immune-boosting benefits of consuming these natural products, as suggested by many Traditional Chinese Medicine practitioners.

Sunburns may include symptoms other than hot skin, such as dehydration and pain. This article provides the best natural sunburn relief tips to help make your life more comfortable if you've been sunburned.