Health Benefits Of Red Ginseng That Will Make Your Life Easier

Red ginseng is made through a unique steaming and drying process, making it warmer in nature than regular ginseng. Here's how that benefits you. 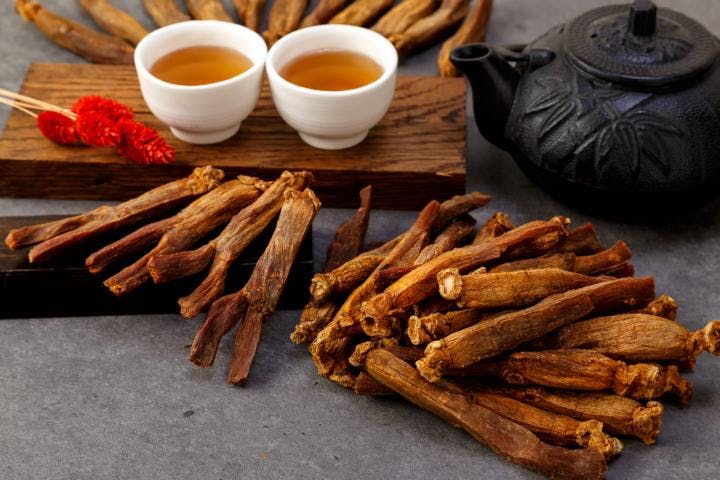 has been used in Traditional Chinese Medicine (TCM) for thousands of years to correct many health disorders. Today, this ancient herb is more important than ever for dealing with modern life.

Read on to learn about the many health benefits of red ginseng, how it’s different from other types of ginseng, and how to use it.

What Is Red Ginseng?

Red ginseng primary active compounds are known as ginsenosides. These are what give the plant its many benefits.

It is commonly used in TCM due to its warming nature. The herb has effectiveness in the Spleen, Lungs, Heart, and Kidneys channels.

According to TCM Physician Wong Si Xuan, it has the ability to invigorate energy and warms energy to restore the pulse. “It is suitable for people who are deficient in energy and generally suffer from extreme fatigue,” stated Physician Wong.

Red ginseng vs. other types of ginseng

Siberian ginseng, also known as Eleuthero, is a different plant and does not contain the same bioactive compounds.

According to Physician Wong, “While different forms of ginseng are often used to enhance wellness, the different species have their distinct effects. Regular ginseng is processed into red ginseng through a steaming and drying process. Both types invigorate energy to restore the pulse.”

“However, regular ginseng is also able to nourish the Spleen and Lungs, boost Blood production and calm the mind. Meanwhile, red ginseng, after processing, tends to be warmer in nature. It would be better suited for people who are Yang Deficient. This includes those who tend to feel cold, especially in the extremities,” Physician Wong continued.

“Red ginseng can help relieve fatigue and stop abnormal bleeding due to Qi Deficiency, such as . It can also be combined with other herbs for personalized treatment, especially if the patient is Yang ,” stated Physician Wong.

Here are some evidence-based benefits:

Thanks to its adaptogenic properties, red ginseng helps increase the body’s resistance to stress.

One study found that people who took it had improvements in energy, sex life, sleep, personal satisfaction, and well-being.

Another study found that people who took it in supplement form than those who took the same supplement without it.

Other research has shown that it may help improve abstract thought. It’s especially effective when combined with

Other research shows that both types – American and red – may help lower blood sugar levels in people with type 2 diabetes.

You don’t need to be an athlete to benefit from increased energy levels. One study found that red ginseng reduced fatigue in 332 people.

Other research shows that it may help improve strength, endurance, and agility or reaction time.

Red ginseng may help prevent you from getting sick. Studies show that it helps increase immune cells in the blood. It also improves the body’s immune response to the flu vaccine.

One study found that the number of colds and flu were two-thirds lower in people who took ginseng and got the flu vaccine four weeks later.

Another study found that it helped reduce the likelihood of getting a cold. Those who got one reported having milder symptoms.

Red ginseng may be used to support fertility, alleviate erectile dysfunction, and reduce symptoms of menopause.

Other studies have found that it decreases menopausal symptoms in women, especially depression and mood disorders.

How To Use Red Ginseng

According to Physician Wong, “red is suitable to be taken in different forms, such as tea, powder, osence form. Ensure that the products bought are from a trusted source.”

What Is Fish Maw And How Does It Keep You Looking Young?

Fish maw is a highly nutritious delicacy that can help you look and feel younger. Here's what it can do for you and how to add it to your diet.

Ready to make 2023 your healthiest year yet? These vitamins and supplements can help you stay on track so you can crush your New Year's resolutions.

Health Benefits Of Black Rice And Other Dark Foods

If you commonly eat brown rice or lighter colored goods, then it's time to try black rice. Learn more about the amazing health benefits of black foods here.

Ginseng root is a popular medicinal herb, and aphrodisiac. Learn how ginseng root can improve men's physical and sexual health.

Can You Eat Shirataki Noodles On The Low Carb Diet?

Do you miss eating pasta on the low-carb diet? Shirataki noodles contain almost no calories and carbs, and they taste great. Learn more here.