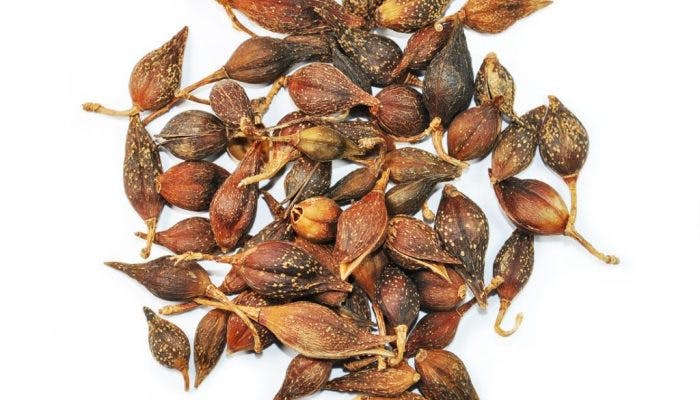 What is Weeping Forsythia (Forsythia Suspensa)?

Weeping Forsythia (lian qiao, 连翘), also known as Forsythia Suspensa, Fructus Forsythia, or the ‘golden bell’ because of the shape and colour of its flowers, is a plant that belongs to the family Oleaceae. In China ,the plant is found in provinces such as Shanxi and Yunnan.

The main medicinal part of this plant is the fruit, Weeping Forsythia, which can be divided into two types based on the season that it is harvested. Green Forsythia Fruit (qing jiao, 绿翘) is collected when the fruit is still barely ripe, while Yellow Forsythia Fruit (huang jiao, 黄翘) is harvested when the fruits are fully ripe. Medicinally, the former is preferred as it is more effective in clearing Heat and dissolving lumps. The fruit is then steamed, dried under the Sun, and seeds are removed from it before the fruit is used in herbal remedies.

In Traditional Chinese Medicine (TCM), Weeping Forsythia falls under the category of ‘Herbs that clear Heat and relieve Toxicity’. Herbs in this category are used to clear inflammatory and infectious conditions, referred to as Internal Heat in TCM. Cool in nature, Weeping Forsythia can help individuals with too much Heat in their body, such as those experiencing a Yang Excess or a Yin Deficiency, to restore a harmonious yin-yang balance.

Bitter in taste, Weeping Forsythia Capsule can cleanse the body by clearing Heat, drying Dampness and promoting elimination via urination or bowel movements. In particular, Weeping Forsythia targets the Heart, the Lungs and the small intestine.

Weeping Forsythia can expel Heat and toxicity from the blood, and to disperse external Wind-Heat from the body. The herb is thus often indicated for many syndromes of warm diseases, and is often combined with Japanese Honeysuckle Flower for mutual reinforcement. While the Heat-dispersing effects of Weeping Forsythia is slightly milder than that of Japanese Honeysuckle Flower, the former is very powerful in its efficiency in clearing Heart-Fire. The herb is thus often used to treat Heat invasion of pericardium manifested as high fever, chills, restlessness and coma.

With its actions in clearing Heat and removing toxicity, Weeping Forsythia can also cure sores, relieve swelling and alleviate sore throats, carbuncles, boils, abscesses, stress rash, erysipelas, pustules under the skin, chicken pox and measles. This herb is even honoured as the holy medicine for patients with frequent ulcers and people who are particularly susceptible to skin infections. Weeping Forsythia can treat scrofula and subcutaneous nodules caused by Phlegm-Fire accumulation too. In addition, Weeping Forsythia can clear Fire from the small intestines, treat heat stranguria, scanty dark urine with pain too.

Weeping Forsythia can promote urination too, which makes it a great herb to treat urinary tract infection, dysuria, hematuria, and acute nephritis. Weeping Forsythia is also one of the most cost-effective treatments for a number of skin problems, such as chafing, redness of the skin, skin inflammation and acne.

Other than the above Forsythia Suspensa benefits, modern research has shown that Weeping Forsythia Capsule has antimicrobial and anti-inflammatory effects, which can help to strengthen the immune system, fight signs of aging and reduce oxidative stress. Another study suggested that Weeping Forsythia could be effective against H1N1. In addition, it has an inhibitory effect on the secretion of sebaceous glands, which can improve oily skin and reduce the risk of acne attacks.

How to Use Weeping Forsythia (Forsythia Suspensa)

The recommended daily dosage of Weeping Forsythia is 6 – 15g, when in powder form or added to boiling water to make a decoction. Some healthcare practitioners recommend a slightly lower daily dose of up to 10g only.

Cautions and Side Effects of Weeping Forsythia (Forsythia Suspensa)

Scientific evidence has demonstrated that Weeping Forsythia may slow down blood clotting. This means that it carries a risk of excess bleeding, and patients who will be undergoing surgery in two weeks should not consume this herb at all.

Here is a summary for Weeping Forsythia: