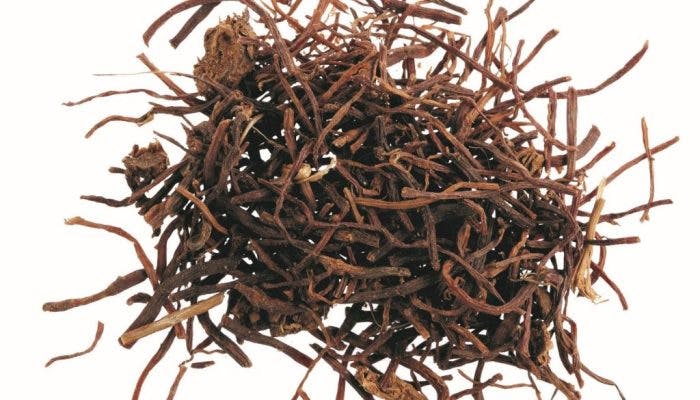 Tatarian Aster Root (zi wan, 紫菀), is the root of Aster Tataricus, an average-sized perennial plant native to East Asia. The plant blooms in September and October, and flourishes in sunny areas with moist, wet soils. In China, Aster Tataricus is predominantly produced in the provinces of Hebei and Anhu provinces. The root is usually harvested in the Spring or Autumn for medicinal purposes.

Purple and stringy, Tatarian Aster Root resembles a pile of purple spaghetti from far. The roots are braided after being plucked, dried under the Sun and cut into thick slices for medicinal usage. Raw Tatarian Aster Root can be fried with honey before use as well.

In Traditional Chinese Medicine (TCM), Tatarian Aster Root falls under the category of ‘Herbs that relieve coughing and wheezing’. The herb can treat symptoms caused by Stagnation of fluids and phlegm, and possess antitussive, expectorant, diuretic or laxative properties.

Other than the above Tatarian Aster Root benefits, the herb can also address asthma and chronic coughing, especially those that are induced by Cold with copious sputum or blood-streaked sputum.

How to Use Tatarian Aster Root (Aster Tataricus)

The recommended daily dosage of Tatarian Aster Root is 3 – 9g, decocted in water for oral consumption. Some healthcare practitioners may recommend a slightly higher dose of 5 – 10g, depending on your body condition.

Tatarian Aster Root is taken internally to treat diseases such as chronic bronchitis and tuberculosis, and it is often used raw with honey to increase the expectorant effect.

Raw Tatarian Aster Root can be found in many Asian markets and herbal shops. Many of it is already stir-fried with honey.

Cautions and Side Effects of Tatarian Aster Root (Aster Tataricus)

There have not been reports of any adverse effects associated with the over-consumption of Tatarian Aster Root. However, the herb should not be consumed in large doses for extended durations of time for safety concerns.

Also, Tatarian Aster Root should be consumed with caution by patients experiencing Excess Heat. The herb is also incompatible with Herba Artemisiae Scopariae (yin chen), and these two herbs should not be used together under any circumstances.

Here is a summary for Tatarian Aster Root: