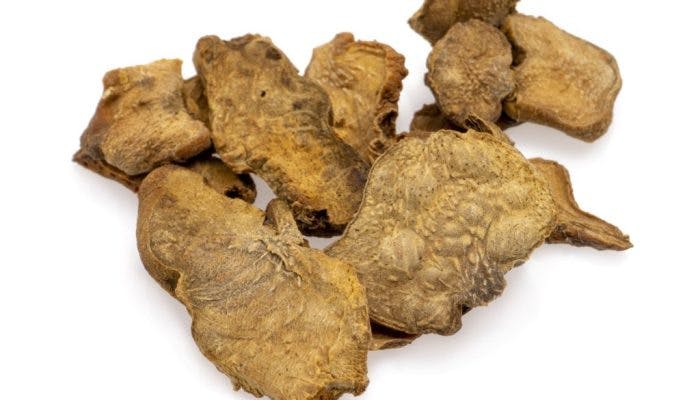 Solomon’s Seal Rhizome (huang jing, 黄精) refers to the roots of Solomon’s Seal, also known as Polygonatum odoratum. Solomon’s Seal is a perennial herb that belongs to the lily family. Native to East Asia and found throughout China, especially in the Henan, Jiangsu, Zhejiang and Fujian provinces, this plant is mentioned in many ancient texts.

While Solomon’s Seal Rhizome was never mentioned in the Traditional Chinese Medicine (TCM) classic Shen Nong Ben Cao Jing (神农本草经), it was featured in many Taoist alchemical texts, such as the writings of Ge Hong, Tao Hongjing and Sun Simiao. Back in the ancient times, Taoists believed that long-term consumption of this herb can contribute to immortality. This is because Huang Jing was linked to the concept of yang qi, giving it the nickname of tai yang cao (Sun Herb). The Song dynasty literatus Zhu Qi once exclaimed in a poem that “the Sun Herb: nothing more potent in the scrolls of the immortals for keeping old age at bay”.

In the West, Solomon’s Seal Rhizome was first mentioned by Dioscorides and Pliny back in the 1st century, and became a valued substance in both European and Native American medical practices. Today, the plant’s rhizome is harvested in the Spring and Autumn, dried and sliced for medicinal usage. It can be used unprepared or steamed, and is often steamed with other items such as wine and black beans.

In TCM, Huang Jing falls under the category of ‘Tonic herbs for Qi Deficiency’. Such herbs can address patterns of Deficiency by replenishing one’s ‘Four Treasures’ (qi, yin, yang, Blood). Neutral in nature, this herb does not affect the yin-yang balance in one’s body. Sweet in taste, Huang Jing can slow down acute reactions, detoxify the body and has a tonic effect on the body by replenishing qi and blood. In particular, the herb targets the Kidneys, the Lungs and the Spleen.

Solomon’s Seal Rhizome can nourish Kidneys and supplement essence to address syndromes of Kidney Deficiency and essence insufficiency. For soreness and limpness of lumbar and feet, dizziness, tinnitus, dry eyes, the early whitening of beard and hair due to Kidney essence insufficiency, Solomon’s Seal Rhizome can be used singly or combined with other yin-nourishing or Kidney-tonifying herbs. The herb can also be indicated for diabetes caused by Yin Deficiency.

The allantoin in Solomon’s Seal Rhizome also exudes a calming and soothing effect, making it a mild sedative. The herb can soothe feelings of discomfort such as anxiety, nervousness, anger, frustration and distress. It may also induce sleep and relaxation to battle insomnia.

Solomon’s Seal Rhizome is also believed to improve the body’s ability to produce synovial fluid, which repairs joint problems and prevents bone diseases such as rheumatism and arthritis. The herb can also enhance the healing of broken and damaged bones. Some use the extracts of Solomon’s Seal Rhizome to mix with wine for people with broken bones to consume.

Solomon’s Seal Rhizome can prevent muscle and ligament problems, as well as the tearing of tendons and cartilage. Some athletes and sports enthusiasts consume the herb in tincture form before practice or competition to improve their flexibility, power and muscle coordination.

There is also evidence that suggests Solomon’s Seal Rhizome contains flavonoids that reduce the risks of heart diseases, as well as the ability to regulate blood pressure. It may thus promote cardiovascular wellness. Rich in glucose, the herb can also act as an anti-diabetic, which makes it an effective tool to control the blood sugar levels in the body.

Solomon’s Seal Rhizome may act as an expectorant and demulcent, which prevents respiratory ailments such as asthma attacks. It may remove Lung congestion, loosen phlegm or mucus and relieve throat irritation, coughs and colds. Solomon’s Seal Rhizome may also enhance the immune system and act as an antiseptic and antibiotic to reduce pain and sepsis. The herb can promote quick healing of wounds and prevent sepsis.

How to Use Solomon’s Seal Rhizome (Huang Jing)

Cautions and Side Effects of Solomon’s Seal Rhizome (Huang Jing)

Solomon’s Seal Rhizome should not be used by individuals who are experiencing excessive Dampness caused by Spleen Deficiency, internal Damp-Heat, diarrhea caused by Cold, coughs with profuse amounts of phlegm, poor digestion and fullness in abdomen with vomiting caused by Qi Stagnation.

Here is a summary for Solomon’s Seal Rhizome (Huang Jing):