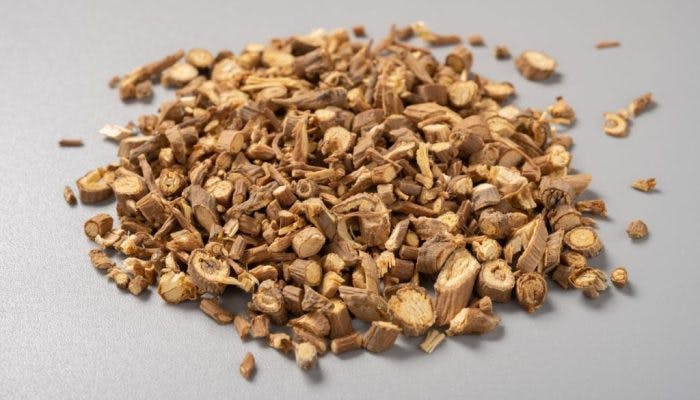 What is Radix Bupleuri (Chai Hu)?

Radix Bupleuri (chai hu, 柴胡), also known as Bupleurum Chinense or Chinese Thorowax Root, comes from the family of Bupleurum, a genus of mostly perennial plants. This genus is native to East Asia, made up of nearly 200 species. Bupleurum plant is an upright growing plant that has yellowish-green petals arranged in groups of five, and its roots are often dried, ground into powder and used medicinally.

In Traditional Chinese Medicine (TCM), Chai Hu belongs to the category of ‘Cool/Acrid herbs that release the Exterior’. Such herbs can treat the early stages of diseases that affect the upper respiratory tract, eyes, ears, nose, throat or skin. In TCM, it is believed that external diseases such as colds or allergies can only invade our body if the external environment overwhelms our wei qi (immune system). In order to address this invasion, Cool/Acrid herbs that release the exterior induce sweating by dilating our capillary pores to expel the diseases from the body.

Cool in nature, the Chai Hu herb can help individuals who have too much Heat in their body, such as those experiencing a Yang Excess or a Yin Deficiency, to restore a healthy yin-yang balance. Bitter in taste, the herb can cleanse the body by clearing Heat, drying Dampness and promoting elimination via urination or bowel movements. In particular, the herb targets the gallbladder and the Liver.

Radix Bupleuri can expel external pathogens to release the exterior, which helps to relieve exterior symptoms such as high fever, cold sweats, thirst and bitter taste in the mouth.

Radix Bupleuri is also a popular herb in the treatment of Liver depression with qi stagnation. This syndrome is often manifested as distending pain in the rib area or abdomen, gastric pain, stress, depression, stomach burning, poor appetite, restlessness, dizziness, vertigo or irregular menstruation. Radix Bupleuri can be combined with other qi-promoting, Liver-soothing, blood-activating or pain-relieving herbs to strengthen its effects.

Radix Bupleuri can ascend the yang qi of the Spleen and the stomach, which then helps to treat symptoms such as diarrhoea, rectum prolapse, hemorrhoids and other symptoms caused by Spleen Deficiency or the sinking of middle qi. In addition, the herb may help to address malaria.

Modern studies discovered that Radix Bupleuri contain active ingredients such as saponins and plant sterols, which have been shown to lower fever and reduce inflammation in animal studies. The herb is also suggested to be able to strengthen the stomach, intestines and promote blood circulation to the liver. Due to its ability to reduce inflammation, Radix Bupleuri may also strengthen one’s immune system.

Radix Bupleuri contains active components called saikosaponins. Existing studies have demonstrated that these components can help our body by acting as antivirals, improving sleep quality, facilitating autophagy and reducing the sensation of pain. In addition, as Radix Bupleuri is high in potassium, it can help to support adrenal fatigue, boost mood and improve emotional wellbeing.

How to Use Radix Bupleuri (Chai Hu)

Radix Bupleuri is often used as part of a larger, more complex herbal formula. The recommended dosage of Radix Bupleuri depends on the exact condition being treated. For general usage, many healthcare practitioners recommend 1.5 – 6g of dried Radix Bupleuri in a decoction.

Cautions and Side Effects of Radix Bupleuri (Chai Hu)

Radix Bupleuri should not be used by individuals who are experiencing Liver Fire that is ascending to the head. Pregnant or breastfeeding ladies and patients with high blood pressure should stay away from this herb for the time being as well.

Also, overconsuming Radix Bupleuri may cause nausea, vomiting or diarrhoea due to its high saponin content. Other side effects include increased bowel movement and drowsiness.

Here is a summary for Radix Bupleuri (Chai Hu):