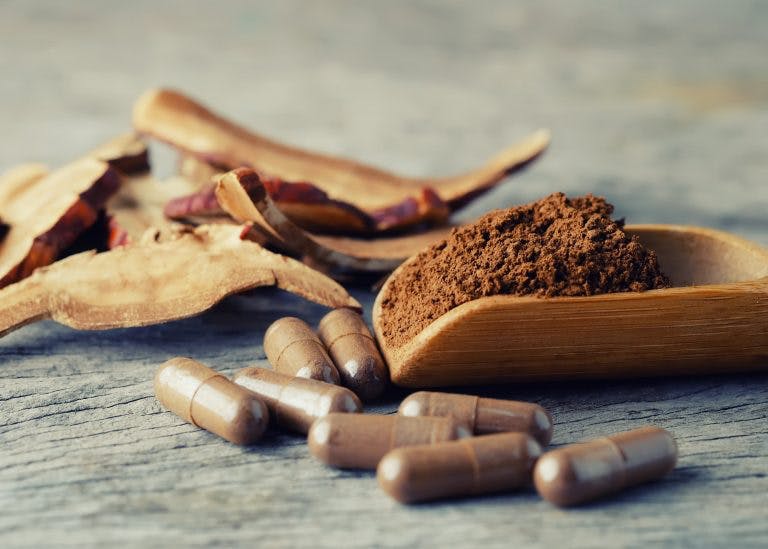 Are you wondering what natural supplements are good for depression? One powerful option to consider is medicinal mushrooms.

Medicinal mushrooms can be consumed in a variety of ways. They are often used in the form of extracts or powder. These forms have a higher concentration of active ingredients.

What are Medicinal Mushrooms for Depression?

Medicinal mushrooms have many health benefits, besides easing depression symptoms. For example, they can help to improve blood sugar levels.

Lowering inflammation in the body may reduce the risk of heart disease, cancer, and arthritis. Plus, mushrooms are the only natural plant source of vitamin D. This vitamin helps to strengthen your bones as well as improve your immunity.

So, how does Traditional Chinese Medicine (TCM) view depression and how do medicinal mushrooms help manage depression symptoms?

From a TCM perspective, stagnant qi, or energy, in the body creates an imbalance that causes depression.

“Qi (vital energy) stagnation compromises the liver’s qi regulation function, and in turn, affects the spleen function. The spleen is responsible for the intake, processing, and distribution of nutrients from food. As a result, there is a lack of nourishment for the heart and an imbalance of yin, yang, qi, and blood in the organs. The source of the problem lies in the liver, but it affects the heart, spleen, and kidney systems as TCM views the body as a whole.”

In TCM, treating depression involves regulating qi and promoting qi circulation, along with counseling. Treatment modalities include acupuncture and exercise, such as tai chi, qigong, and yoga, in addition to herbal supplements.

Types of Mushrooms For Depression

Studies have shown medicinal mushrooms have antioxidant, anti-neuroinflammatory, and neuroprotective effects. The following list contains six mushrooms for managing depression. Many of these have other health benefits, as well.

Studies have shown that chaga extract can help to prevent the production of cytokines in the body, which cause inflammation.

Consuming chaga mushrooms may help alleviate symptoms because depression seems to have a link to chronic inflammation.

Caterpillar fungus or Cordyceps sinensis is a rare composite of dead caterpillar and fungus stromata. While it’s not taxonomically a mushroom, cordyceps has been considered a medicinal mushroom in TCM and Tibetan practice.

Animal studies have shown that cordyceps may be beneficial for depression management. It benefits the kidneys and lungs. Physician Lim explains that from a TCM perspective, depression affects the kidneys.

Because of this, cordyceps may indirectly help alleviate depression. Lab studies have also shown that cordyceps can inhibit the growth of many types of cancer cells, including colon, skin, and liver cancers.

Cordyceps also contains adenosine, a heart-protective compound. Nowadays, you can easily consume cordyceps as a supplement in the form of capsules to reap its health benefits.

Lion’s mane mushrooms can improve symptoms of depression, help increase concentration, and alleviate anxiety and irritability. In a small human study and a study on mice, this distinctive-looking mushroom helped improve cognition and memory.

In addition, studies show that lion’s mane mushrooms encourage the production of bioprotein nerve growth factors and myelin. These are both crucial to brain health. An imbalance or lack of these in the body can contribute to neurological diseases such as Alzheimer’s and multiple sclerosis.

This medicinal mushroom is also known as lingzhi. It contains a compound called triterpene. Animal studies have shown that this compound helps to alleviate symptoms of anxiety, depression, and insomnia. TCM practitioners use reishi to invigorate qi and calm the mind. In addition, it is used to relieve cough and asthma.

A study has reviewed the mental health data of 24,000 participants and found a correlation between shitake mushroom consumption and reduced risk of depression.

These mushrooms also contain compounds that inhibit the absorption and production of cholesterol in the liver. Research shows that shitakes lower LDL (“bad”) cholesterol in mice. In addition, another study proves that polysaccharides in shitakes helped inhibit the growth of leukemia cells.

Wuling shen is a traditional TCM treatment for insomnia, trauma, and depression. Studies have also shown that it has antioxidant, liver-protective, and immune-boosting properties.

If you are struggling with depression or anxiety, you may want to consider medicinal mushrooms for depression. Be sure to consult your doctor or licensed TCM practitioner first.

What is Stress? Discover 5 Remedies to Treat the Symptoms

When you understand what stress is and how it affects the mind and body, you can choose the right herbal remedy to manage the condition.

Celebrate Love This Valentine's Day With Random Acts Of Kindness

Did you know that performing random acts of kindness boosts your levels of the love hormone oxytocin? Check out these health-inspired ways to celebrate Valentine's Day this year.

How to Relieve Stress with These 6 Natural Treatments

Stress is very common. Natural remedies can provide some relief for everyday stressors and provide balance for your overall health and well-being.

The Connection Between Stress and Substance Abuse

Stuck in a cycle of stress and substance abuse? Learn how these two conditions feed off each other - and how to put an end to both here.

Put An End To Your Migraine Symptoms With These Tips

Migraine symptoms can make it hard for you to make it through the day. Over time, they can impact your quality of life. Learn how to get rid of them here.