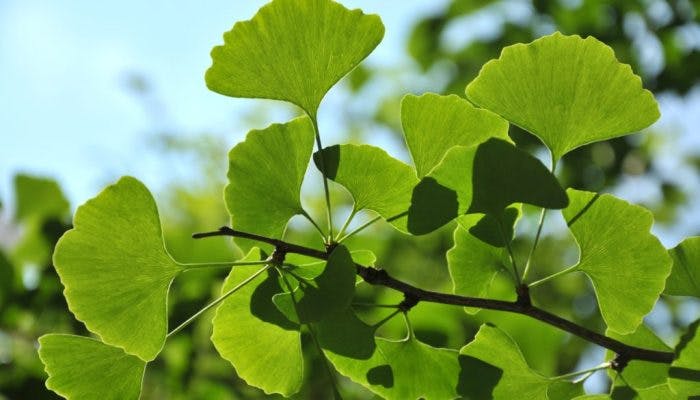 What is Ginkgo Biloba Leaf?

Ginkgo Biloba Leaf (yin xing ye, 银杏叶) comes from Ginkgo, a plant that originated over 270 millions years ago, and has been cultivated in China since at least 2600 BC to treat asthma and bronchitis. One of the longest-living and most adaptable trees in the world, some Ginkgo trees are said to be more than 2000 years old, and they can grow up to a height of 120 feet. These tenacious trees existed before the Ice Age, and some even survived the atomic blast in Hiroshima in 1945 to continue thriving to this day.

The first records of interaction between Europeans and the plant dates back to 1690 in Japanese temple gardens. Due to the Ginkgo tree’s status in Buddhism and Confucianism, many Ginkgo trees are planted in Korea and Japan as well.

In Traditional Chinese Medicine (TCM), Ginkgo Biloba Leaf falls under the category of ‘Herbs that relieve coughing and wheezing’. Such herbs help to treat symptoms caused by the Stagnation of fluids, which results in phlegm when it over-accumulates. Neutral in nature, Ginkgo Biloba Leaf does not affect the yin-yang balance in your body.

Bitter and sweet in taste, Ginkgo Biloba Leaf can cleanse the body by clearing Heat, drying Dampness and promoting elimination via urination or bowel movements. Also, the herb tends to slow down acute reactions, detoxify the body and has a tonic effect on the body by replenishing qi and blood. In particular, Ginkgo Biloba Leaf targets the Heart and the Lungs.

Ginkgo Biloba Leaf can assist Lung-qi and astringe the Lungs to ease dyspnea, symptoms of chronic cough and shortness of breath. Ginkgo Biloba Leaf’s ability to resolve Dampness also makes it a great treatment for diarrhea.

Ginkgo Biloba Leaf can also tonify the Heart, remove Blood Stasis and relieve pain. For example, the herb can relieve palpitation and cardiac pain. The herb is also frequently used to treat headaches and migraines.

Other than the above Ginkgo Biloba Leaf benefits, research has demonstrated that Ginkgo Biloba Leaf may contain properties that can protect heart health, brain health and prevent strokes. By increasing blood flow to promote the dilation of blood vessels, the herb may have applications for the treatment of diseases related to poor blood circulation.

Repeatedly evaluated for its ability to reduce anxiety, stress and other symptoms associated with Alzheimer’s Disease, dementia and cognitive decline linked to aging, Ginkgo Biloba Leaf’s ability to promote blood flow may improve blood flow to the brain. There is also some speculation that Ginkgo Biloba Leaf may enhance brain functions to increase mental performance, such as improved memory, focus and attention span. However, more studies are required to affirm the herb’s effects on the brain.

Other studies have suggested that Ginkgo Biloba Leaf may improve symptoms of asthma and other inflammatory respiratory diseases like Chronic Obstructive Pulmonary Disease (COPD).

Preliminary research indicated that Ginkgo Biloba Leaf may help to treat both physical and psychological symptoms of premenstrual syndrome (PMS), as well as to treat sexual dysfunction issues such as erectile dysfunction and low libido.

How to Use Ginkgo Biloba Leaf

Most research has not evaluated doses greater than 600mg a day, and most suggest that the herb seems to be the most effective when taken in doses of 120 – 160 mg. It is best to consult your healthcare provider on the exact dosage recommended for your body condition and the method of usage.

Additionally, do keep in mind that it may take several weeks before you begin to notice any effects.

Cautions and Side Effects of Ginkgo Biloba Leaf

Ginkgo Biloba Leaf should not be consumed together with any fish or seafood.

Some common side effects associated with the consumption of Ginkgo include gastrointestinal disorders, headaches and dizziness in patients who consumed excess amounts, nausea and rashes. Also, as the herb decreases the effectiveness of platelet aggregation, it should not be taken with other blood-thinning agents such as coumadin or warfarin.

Individuals who are pregnant or breastfeeding should also avoid this herb for the time being. In addition, if you are allergic to plants that contain alkylphenols, you should also refrain from using this herb.

Here is a summary for Ginkgo Biloba Leaf: