HIV Symptoms And Other Facts Worth Knowing

HIV symptoms are no longer something to be scared of. In this article, we'll go over the facts about HIV and its progression into AIDS to help clear up some of the confusion. 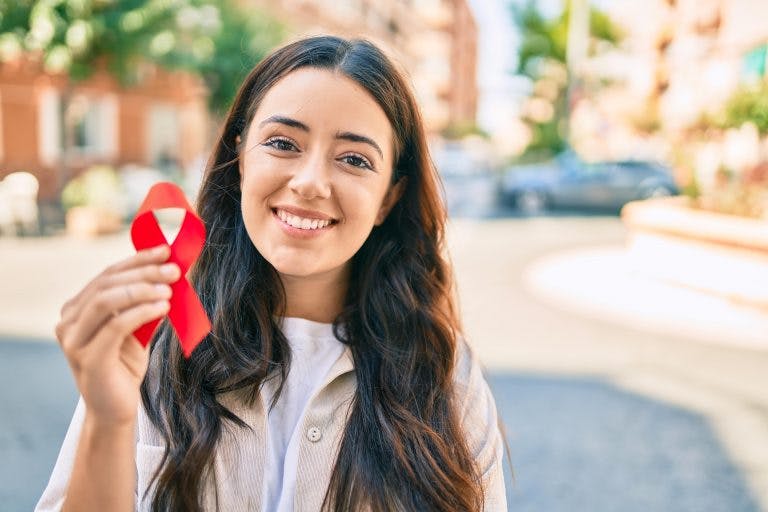 HIV were once greatly feared because they were usually associated with certain death. However, this is no longer the case, but the fear and stigma around HIV continue today.

In fact, many people with HIV go on to live normal, healthy lives, thanks to the help of medication from their doctor and lifestyle habit changes.

In this article, we’ll debunk some of the most common myths surrounding HIV symptoms. Share this article with anyone who could use this information.

HIV is short for Human Immunodeficiency Virus. The World Health Organization (WHO) defines it as an infection that attacks the body’s immune system, specifically the white blood cells (CD4 cells).

Researchers have discovered that HIV is a hybrid of the Simian Immunodeficiency Virus (SIV) that originated in monkeys. It infected chimps and later transmitted to humans. This type of HIV is called HIV-1, which is the kind that is detected in 95% of infections worldwide.

The second type of HIV, named HIV-2, was first acquired by humans from Sooty Mangabey monkeys. Largely found in West Africa, HIV-2 is quite uncommon and less hostile than HIV-1. However, when untreated, both can lead to AIDS and be fatal.

As mentioned above, HIV damages the immune cells. In doing so, the virus leaves the infected person defenseless against other infections and cancer.

Someone can get infected from an HIV-positive person’s body fluids via sexual intercourse and contact with blood. A mother can also transmit the virus to her child in the womb, during delivery, or through breast milk. Drug users can infect each other when sharing needles.

An accidental prick of a needle from or bite by a patient can be a bit risky. crucial to visit a doctor immediately to receive antiretroviral treatment (ART).

Sharing utensils and personal objects is fairly safe, as long as they’re unable to cut or cause a wound with an infected person. The virus is not transmissible through normal physical contact, like shaking hands and hugging. Also, mosquito and insect bites definitely cannot spread the disease.

People with HIV who take ART and are virally suppressed will not infect their sexual partners.

These behaviors or circumstances can put some people in a bigger danger:

Without any treatment, HIV can progress into the most advanced stage: Acquired Immunodeficiency Syndrome (AIDS).

Overall, the HIV infection is divided into three stages:

Symptoms of this stage include flu, cough, fever, headache, sore throat, rash, and joint pain. They can occur two to four weeks after the initial infection.

During this stage, the influenza-like illness disappears, and the infected person feels well, without realizing that HIV continues to destroy their immune cells. This can last for years.

Symptoms of AIDS may include:

How Are HIV Symptoms Diagnosed?

The only way to properly diagnose is through a blood test. A person may need to retake the test in one to three months regardless of the result. The reason is that the antibodies to HIV will develop within 28 days of possible exposure.

During this “window period,” the level of HIV antibodies in a person may not be high enough to be detected. At the same time, it’s also a critical period where a person may infect others.

Individuals with high-risk behaviors, as listed above, should frequently get themselves tested.

Since there is no vaccine for HIV yet, a person can avoid contracting HIV through:

How Can TCM Help HIV Symptoms?

Although there is still no cure for HIV infection, treatments are available. As stated above, by taking ART, an infected person can control the virus and therefore not transmit it to other people. It will also suppress the virus from replicating and boost the CD4 cells.

As long as the patient remains on this daily, long-term treatment, they can live normally like any other uninfected person. The earlier they can get diagnosed and receive ART, the better.

A 2017 study, although limited, concluded that ART would have a better effect when combined with Chinese herbs. Furthermore, the research also showed that the herbs alone could provide a similar result to the ART combination.

These practices are believed to enhance immunity, slow down the virus’s progression to AIDS, and alleviate the symptoms. For now, the first and only TCM-approved medication for HIV and AIDS that is already approved by the Saudi Food and Drug Authority (SFDA) is Tangcao Tablet. This medication is not yet approved by the American FDA.

Despite this, there are things you can do to boost immunity and keep your body as healthy as possible if you have been diagnosed with HIV. For example, research shows that taking Lingzhi mushrooms may be promising in the fight against HIV infections. Eating a healthy diet, exercising often, and practicing healthy lifestyle habits can also help.

Looking at the development of the treatments, it seems like the on HIV infection in recent years has been quite a since HIV patients can now expect to live as long as uninfected individuals.

While it may not be a clean and complete victory against HIV, things have certainly been looking up. Hopefully, this will lead to a more optimistic, AIDS-free future.

6 Facts About Rheumatoid Arthritis To Help You Manage Symptoms

Rheumatoid arthritis is a painful condition that occurs when the immune system mistakenly attacks the lining of the joints, resulting in pain and inflammation. Learn more about how to manage your symptoms here.

Memorial Day marks the first of many social gatherings that will take place this summer. Learn tips for boosting your immunity and practicing social distancing here.

How Can A Foot Bath Improve Your Health?

Don't neglect your feet! These foot bath benefits will have you sleeping better at night and feeling less stressed after a long day.