Stomach Flu vs. Food Poisoning: What’s The Difference and How Do You Treat It?

Vomiting with diarrhea for days? You may have stomach flu. But, how can we tell if it's the contagious stomach flu or food poisoning? Here are the facts that can help you feel better. 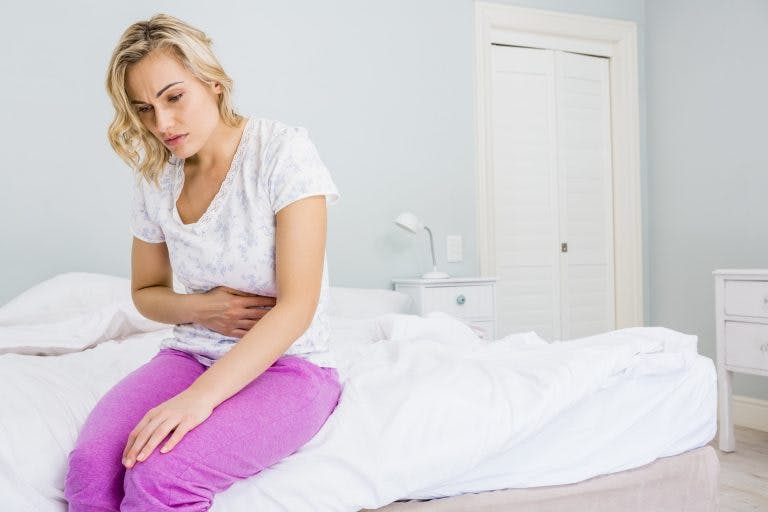 The stomach flu is extremely common in the United States with an estimated 2,500 cases per year, according to the CDC.

Most of these cases occur during flu season from November to April, but the stomach flu is not the same thing as the typical flu most Americans think of.

In this article, we’ll discuss the stomach flu vs. food poisoning and other common gastric ailments. You’ll also learn about the symptoms, causes, and treatments.

What is the Stomach Flu?

Although it has the word “flu” in its name, the stomach flu (or gastroenteritis) is not a type of influenza.

Instead, symptoms of this illness arise from inflammation of the intestinal lining due to a viral infection, resulting in abdominal pain, diarrhea, fever, and nausea.

Gastroenteritis, which goes by other names as well, such as the stomach bug, viral gastroenteritis, or stomach virus, can be worse at night due to circadian rhythms.

The stomach flu can look a lot like food poisoning, with symptoms such as diarrhea, nausea, vomiting, stomach pain and cramps, fever, as well as dizziness. But they are not the same illness.

“Food poisoning, on the other hand, is an infection due to bacteria found in ingested food. In this case, the attack is usually acute, part of an outbreak, with a short incubation period due to the bacteria releasing toxins into the body,” Ta stated.

The norovirus and rotavirus cause most of the stomach flu cases. The norovirus, also known as the Norwalk virus, can infect anyone, but it’s most common in adults.

Globally, at least 1 out of every 5 cases of gastroenteritis is due to the norovirus. While a vaccine for the rotavirus is available, vaccines for the norovirus are still in development.

Infections in younger children, especially infants, are often caused by the rotavirus. Because of the risk of dehydration leading to more severe complications, it is important to recognize and treat symptoms early.

For adults, watch out for symptoms like diarrhea, vomiting, nausea, stomach pain, fever, headache, and body aches. These symptoms usually develop 12 to 48 hours after an individual has been exposed to the norovirus.

Interestingly, medical observations show that not all individuals infected by the norovirus exhibit stomach flu symptoms.

In other words, some individuals may get sick from the infection, whereas others may not. Some researchers think that genetic differences could be a factor.

Stomach Flu, According to TCM

In TCM, the root cause of diarrhea is dampness. “Those with too much dampness may be more likely to trap exogenous factors such as the norovirus in their bodies,” explains physician Chu.

“Other factors include consuming cold and raw foods that promote dampness, which negatively affects the liver and digestion. Existing chronic illnesses and old age can also result in a compromised spleen and kidney function, leading to stomach issues,” physician Chu elaborates.

How To Treat The Stomach Flu

For people who are infected with norovirus, there is no specific medicine to treat it.

Your doctor may admit you into the hospital and treat you with an IV fluid or anti-viral drugs to keep you hydrated and help clear the virus from your system if your symptoms worsen or do not get better with home treatment.

The best way is to relieve the symptoms by eating a light diet and getting adequate rest.

“Acupuncture and herbal medication can easily remedy the stomach flu. These herbal remedies work to optimize the body’s response to external pathogens,” says Physician Chu, adding that they also help correct any patterns of disharmony that cause someone to be more susceptible to the infection.

Taking a high-quality probiotic, such as Gastro-Immune Probiotic, can help restore good gut bacteria that has been depleted due to diarrhea and vomiting.

Qi and Blood Nourishing Tea is easy on sensitive stomachs and can help replenish some of the nutrients lost while experiencing stomach flu symptoms, while An Ji Le (安濟樂) capsules may provide relief from indigestion, nausea, and diarrhea.

Most people get better within one to three days. However, if the symptoms persist even after receiving treatment, a TCM physician may order a blood test and a bacterial culture test to determine other possible causes of the illness.

How To Prevent The Stomach Flu

One of the best defenses against the stomach flu is to avoid infection altogether. You can do this by maintaining good health and practicing good personal hygiene.

Be sure you’re washing your hands frequently to avoid exposure to bacteria that could make you sick.

Parents should keep children at home until the infection subsides to prevent spreading it to others.

Here are some other tips for preventing the stomach flu:

When To See A Doctor

You can try to treat the stomach flu at home using the remedies mentioned above. However, it’s important to know when you should seek medical treatment.

See a doctor for the stomach flu if you have any of the following symptoms:

As much as we try to prevent infection, just like the regular flu, many of us will have experienced the stomach flu at least a few times in our lives.

Fortunately, with some symptom-calming remedies, rehydration, nutrient replacement, and sufficient rest, you will be well on your way to recovery.

Urinary Tract Infection Relief To Help You Care For Yourself

A urinary tract infection is common among pregnant women, but that doesn't mean you have to suffer through one. Read these tips from our experts on safe ways to manage a UTI.

How to Protect Yourself And Your Child Against Hepatitis B

Hepatitis B symptoms aren't usually present for the first 30 to 60 days after infection. By the time you notice something is wrong, chronic infection may have set already in. Learn how to protect yourself (and your child) here.

Top Probiotics Benefits That Are Worth Knowing

Probiotics benefits, such as having an easier time going to the bathroom, are not limited to your gut. Read on to learn more about why adding good bacteria to your diet can be beneficial for other areas of your body, too.

How To Use TCM To Help You Recover From Colorectal Cancer

TCM can be used along with Western medicine to help provide the best support during your colorectal recovery process. Learn more here