Snow fungus is a well-known ingredient in Traditional Chinese Medicine due to its health benefits. Here are reasons to add this ingredient to your dessert and dishes. 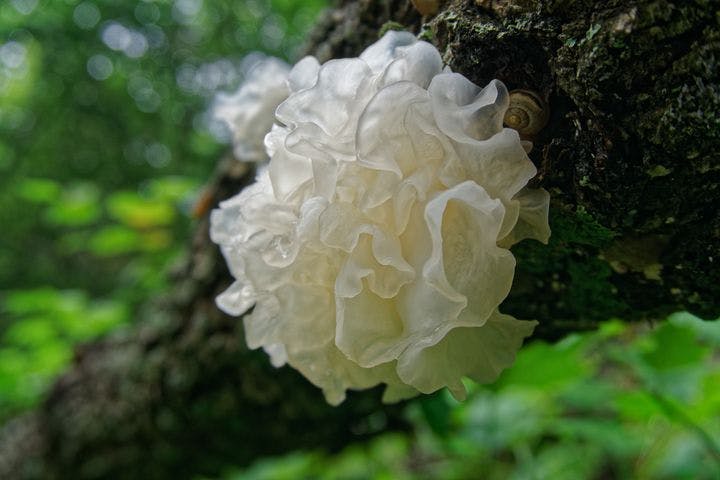 Have you ever heard of a medicinal dessert? Say hello to snow fungus. Due to its health benefits and mild taste, snow fungus features prominently in Traditional Chinese Medicine (TCM) and Chinese cuisine, especially in soups and desserts. It’s been used in TCM for anti-ageing, immune support, and disease prevention for hundreds of years.

Read on to learn about its benefits and how to incorporate it into your diet.

Here are six health benefits of snow fungus you should know about.

In TCM, white foods like snow fungus are considered beneficial for the Lungs, states TCM physician Lee Shin Wei. Specifically, it nourishes and moistens the Lungs. For this reason, it is a well-known key ingredient in simple TCM soups that help with respiratory tract infections.

In a 2018 study published in Oncology Letters, researchers found that Tremella polysaccharides have protective properties on the respiratory system. It significantly inhibited the onset of Lung cell death caused by the toxic lipopolysaccharides of the Pseudomonas aeruginosa bacterium. This pathogen is a major cause of respiratory disease among infants and children worldwide.

Physician Lee also shares that the mushroom strengthens the Spleen, revitalises the body, promotes fluid production, moisturises and nurtures skin, reduces wrinkles, and amps up facial appearance. “Snow fungus is packed with plant collagen. It contains 17 kinds of amino acids – the ingredients for collagen synthesis. It also has natural water-retaining ingredients such as tremella polysaccharide, calcium, and other minerals,” she further details.

A study published in 2017 in Molecular Medicine Reports found that Tremella polysaccharides protect skin from damage and ageing. This happens through the upregulation of SIRT1 enzymes. These enzymes are involved in the prevention of cell death from oxidative stress.

The past few decades of research indicate that snow fungus is a viable health supplement to enhance the immune system. Again, Tremella polysaccharides appear to be the star player. Tremella fuciformis has been found to activate macrophages, T-lymphocytes, and B-lymphocytes. These are the three types of white blood cells that protect our body from pathogens.

4. Neuroprotective and great for brain health

There is growing evidence that the mushroom promotes nerve growth factor (NGF) that can help with neurological illnesses such as Parkinson’s disease. Tremella polysaccharides’ protective effect on neurons is based on the same mechanisms of neuroprotective agents currently on the market.

Numerous studies indicate snow fungus may also help with brain diseases such as dementia and Alzheimer’s. A recent 2018 study published in the Journal of Medicinal Food showed that Tremella fuciformis supplementation improved memory function in individuals with subjective cognitive impairment.

As with other edible mushrooms with medicinal properties, this ingredient is rich in fibre and low in calories. This makes it a great food for heart health. Previous studies have shown snow fungus to lower the serum levels of total cholesterol and LDL cholesterol.

Snow fungus is also a strong candidate among health foods that can help tackle metabolic diseases. A new review published in the International Journal of Immunology and Pathology in 2021 included an animal model study demonstrating the efficacy of the mushroom on obesity and diabetes. Tremella polysaccharides significantly downregulated 84 genes involved in obesity, insulin resistance, and other diabetes complications.

The Best Part: You Can Eat It as a Dessert!

“In TCM, this mushroom is considered to have a sweet, mild, and neutral taste,” explains Physician Lee. To ensure you get the full health benefits, ensure you’re consuming a high-quality product. Look for these characteristics:

“It’s unsuitable for people with a cough with mucus or a Damp-Heat constitution. Those with a cold at the early stage of exogenous infection should avoid it,” Physician Lee advises.

She shares the following quick and easy dessert soup recipe:

With snow fungus, there is such a thing as a healthy dessert. Don’t wait too long, start incorporating it in your diet today.

Why Enzyme Drinks Could Help Boost Your Health and Wellness

Enzyme drinks boast plenty of health benefits. Let's discuss why they are an easy, delicious health booster and learn how to make your own at home.

Why Your Healthy Eating Plan Should Include Phytochemicals

Healthy eating involves plenty of vegetables and fruits because your body needs phytochemicals. What are they, and what foods have them? Find out here.

These 7 medicinal plants are great for treating common ailments and general health maintenance that you can access in your backyard.

Why Overnight Oats Are Great for Weight Loss

A diet with oats for weight loss is a popular trend. Find the best ways to prepare healthy overnight breakfast oats to lose the extra kilos.