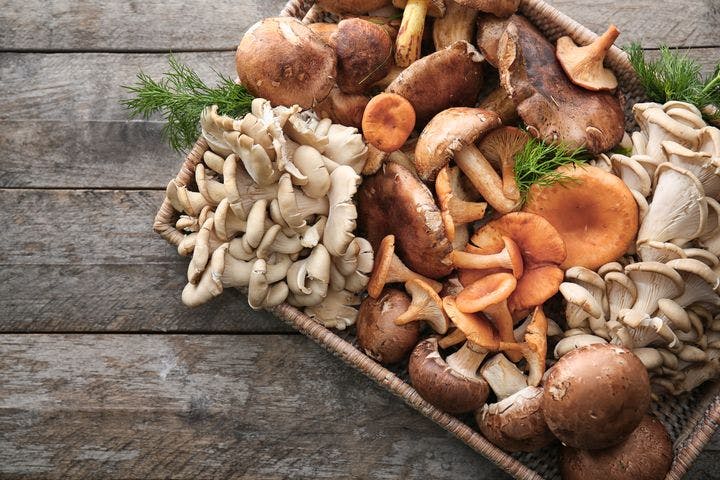 We’re familiar with mushrooms like shitake, enoki and portobello in our everyday stir fry dishes and sauces, but did you know there are some types of mushrooms that have been found to be able to lift your mood?

There are several mushrooms popular in Traditional Chinese Medicine (TCM) formulations that have been found to be able to have a positive effect on depression. Of course, there are other TCM treatments like acupuncture, tai chi, Qigong, and yoga, which can help with mental health but perhaps mushrooms can be another tasty option to consider.

Read on to see what types of mushrooms can help with depression and how they can be used to improve mental health.

Also known as caterpillar fungus, cordyceps is a composite of dead caterpillar and fungus stromata. It is used in TCM and Tibetan practice as a medicinal mushroom.

Studies have shown that cordyceps may help manage depression. It can also inhibit the growth of many types of cancer cells, including lung, colon, skin and liver cancers.

Cordyceps also contains adenosine, a heart-protective compound. It may also have a beneficial effect on cholesterol levels. You can find them at most Chinese medicine shops. They come in their original form, as well as capsules or powder for easier consumption.

This mushroom that is common in Asian cooking can also help reduce the risk of depression. It contains compounds that inhibit the absorption and production of cholesterol in the liver. It can also boost heart health because shitake mushrooms have 3 compounds: eritadenine, sterols and beta glucans.

A study conducted by Japanese researchers from Beppu University Junior College showed that shitake mushrooms can help lower the LDL (bad) cholesterol in rats and that its polysaccharides can help inhibit the growth of leukaemia cells.

This mushroom is traditionally used in TCM to treat insomnia, heart palpitation, hypertension, burns and bleeding. Wu ling shen (乌灵参) is also used for depression as studies have shown that it is involved in certain neurological mechanisms and pathways to treat the condition and improve impairments in learning and memory when tested on rats.

It is also popular due to its antioxidant, liver-protective, and immune-boosting properties.

Not a mushroom type that you’ll typically hear about, but consuming Chaga mushrooms may help alleviate depression. Studies have shown that Chaga extract can help prevent the production of cytokines in the body, which cause inflammation, and depression seems to have a link to chronic inflammation.

Other benefits of Chaga mushrooms include combating oxidative stress, keeping your skin looking younger and slowing down the ageing process. It can help strengthen your immune system too. It may also help lower blood sugar and slow the progression of cancer cells.

If you are on blood-thinning medication, you should avoid Chaga mushrooms as they contain a protein that can prevent blood clotting.

When in raw form, this mushroom has a beautiful, soft exterior that looks like a feather, or a lion’s mane. It is how its name came about. Lion’s Mane is said to be able to improve symptoms of depression, help increase concentration, and alleviate anxiety and irritability. It also has strong anti-inflammatory, antioxidant and immune-boosting abilities.

Lion’s Mane works to improve cognition and memory, while encouraging the production of bioprotein nerve growth factors and myelin – both crucial to brain health. An insufficient amount or lack of these in your body can contribute to neurological diseases such as Alzheimer’s and multiple sclerosis.

Physician Lim Sock Ling advises that if you have a surgery scheduled, you need to stop the consumption of reishi at least two weeks before. “Those with bleeding disorders should use with caution or consult with a licensed TCM professional before using as it may increase the risk of bleeding in some people,” she says. This precaution is due to studies showing that high doses of the mushroom may cause an increased risk of bleeding in some people if consumed before or during surgery.

According to TCM, Qi (vital energy) Stagnation in your body can create imbalance, which leads to depression. From a TCM perspective, stagnant qi, or energy, in the body creates an imbalance that causes depression.

“Depression causes Liver Qi Stagnation, and in turn, affects the Spleen function. The Spleen is responsible for the intake, processing, and distribution of nutrients from food. As a result, there is a lack of nourishment for the Heart and an imbalance of yin (passive energy), yang (active energy), qi, and blood in the organs. The source of the problem lies in the Liver, but it affects the Heart, Spleen, and Kidney systems as TCM view the body as a whole,” explains Physician Lim.

Just like any other traditional medication, you will need to check with your physician first before purchasing and consuming any of these mushrooms as medicine. It is also crucial to consult a doctor for Western medicine if depression symptoms worsen. TCM can always support the Western medicine that you are required to take.

This is an adaptation from an article, Discover 6 Medicinal Mushrooms for Depression, which first appeared on All Things Health.

Melatonin Side Effects: How Will It Change Your Body?

Melatonin is produced by your body and is a well-known sleep aid supplement. Learn more about melatonin's side effects to determine if it's right for you.

Chicken Essence Benefits: Why this Traditional Medicine is More Than Just a Myth

Chicken essence is a familiar staple in Asian households, but what is it, really? Find out what's inside it and why it's good for your health here.