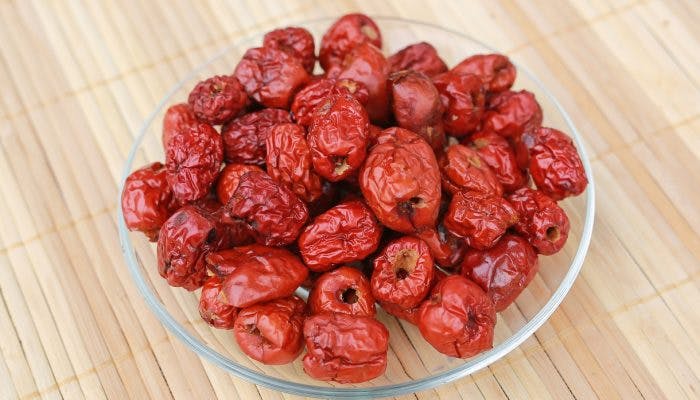 What is Chinese Date (Jujube Fruit)?

Chinese Date (da zao, 大枣), also known as Jujube Fruit, is a small round fruit that grows on large flowering shrubs or trees named Ziziphus Jujuba. These trees are native to China, where they have been cultivated for more than 4000 years, and thrive best in warm, dry climates. Nowadays, red dates are also grown and enjoyed around the world, including Russia, southern Asia, southern Europe, southwestern United States, and Australia. Chinese Date is typically dark red or purple in colour when ripe, and can reach up to 2 inches in diameter.

Due to its sweet taste and chewy texture, Chinese Date is often dried and used in candies, desserts and dishes, especially in Asia. It is also used in herbal remedies due to its health benefits. Traditional Chinese Medicine (TCM) has recognised the health benefits of Chinese Dates since thousands of years ago, as recorded in the early classic medicine texts of Huang Di Nei Jing (黄帝内经) and Shen Nong Ben Cao Jing (神农本草经).

Jujube Fruit has very positive meanings in Chinese culture, such as representing a sweet life, a flourishing business, fertility, harmony and happiness. On special occasions such as Chinese New Year and elders’ birthdays, many people will buy Chinese Dates as gifts for their friends and relatives.

In TCM, Chinese Date falls under the category of ‘Tonic Herbs for Qi Deficiency’. It helps to replenish one’s ‘Four Treasures’ (qi, blood, yin, yang). Warm in nature, Jujube Fruit helps individuals who have too much Cold in their body, such as those experiencing a Yin Excess or a Yang Deficiency, to restore a healthy yin-yang balance.

Sweet in taste, Chinese Date can slow down acute reactions and detoxify the body. It also has a tonic effect on the body by replenishing qi and blood. In particular, this herb targets the Spleen and the stomach.

Chinese Date can tonify the Spleen and stomach qi to tackle Qi Deficiency syndromes such as poor appetite with emaciation, fatigue, loose stool due to malnutrition, and shortness of breath.

Jujube Fruit is also useful in harmonizing the harsh properties of other herbs.

Other than the above Jujube Fruit benefits, modern studies have also shown that Jujube Fruit is rich in antioxidants, which means that it can help to prevent damage caused by radicals to prevent chronic conditions such as Type 2 Diabetes, heart disease and certain cancers. Chinese Date may also help to improve memory and protect brain cells from damage caused by nerve-destroying compounds.

Chinese Date may also boost one’s immunity by lowering levels of inflammation and providing Vitamin C. The high fiber content of Jujube Fruit also means that it can help to improve digestion, reduce constipation and indigestion, and decrease the risk of ulcers, injury and harmful bacteria residing in one’s gut.

How to Use Chinese Date (Jujube Fruit)

The exact amount of Chinese Dates to be taken depends on the condition that is being treated. In general, healthcare practitioners usually recommend 10 – 30g of dried Jujube Fruit in the form of a powder or concoction for oral consumption.

Other than being in a form of herbal remedy or health supplement, Chinese Date is also often available as candied treats.

When choosing Jujube Fruit, we recommend you to choose the smaller dates that have firm and deeply wrinkled skin to reap more health benefits from it.

You can enjoy Chinese Dates as they are, or add them to your dishes by cooking it with your meal ingredients. For example, you can add Chinese Dates to your rice congee, tea, soup or vegetables.

Cautions and Side Effects of Chinese Date (Jujube Fruit)

Chinese Date should not be consumed by individuals experiencing conditions of Dampness, Food Stagnation, intestinal parasites and dental diseases. If you are having any of the following symptoms, it may be best to avoid Jujube Fruit for the time being:

Here is a summary for Chinese Date (Jujube Fruit):