Getting Pregnant: Firsthand Stories from Couples Who Had a Successful Pregnancy

If getting pregnant is more challenging than you expected, don’t lose heart. Hear from couples who had a successful pregnancy after infertility struggles. 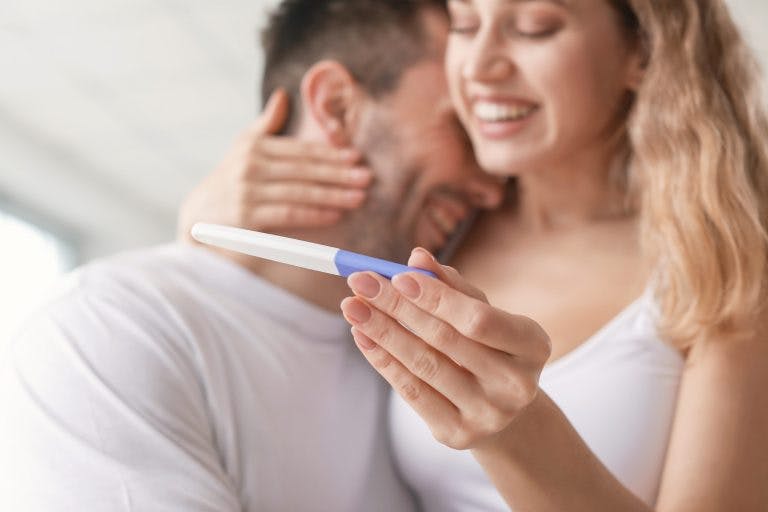 If you are struggling to start a family, you may be wondering, “What are the chances of getting pregnant?” In this article, you’ll hear from three couples who asked themselves the same question. Yet, despite frustration and heartbreak, each couple has their own successful pregnancy story. Keep reading to hear their stories and find out how you can increase your chances of a healthy pregnancy.

Allison and Matt were excited to start a family. But despite being in their 20s, they weren’t getting pregnant. Frustrated, Allison scheduled an appointment with her doctor. She learned that she had a mild case of PCOS (polycystic ovarian syndrome). This condition was likely impacting ovulation. Her doctor prescribed Clomid, a medication to spur ovulation. Allison hoped that by regulating her ovulation cycle, she would soon conceive. However, the journey to getting pregnant wasn’t over yet.

After completing several rounds of medication with no luck, Allison’s doctor recommended a local fertility clinic. But, still, they weren’t getting pregnant. Soon after their fertility treatment, the doctor suggested that they try IUI (intrauterine insemination). Again, they went through several rounds and repeated negative pregnancy tests.

Finally, their doctor suggested IVF (in vitro fertilization). This procedure resulted in 12 healthy blastocyst embryos. Unfortunately, the first embryo transfer resulted in a miscarriage due to a suspected ectopic pregnancy. Determined, Allison had another embryo transfer, which led to a successful pregnancy immediately after the miscarriage. Allison and Matt were elated. In April 2020, after two years of trying, they were thrilled to welcome their baby girl into the world.

“I’m just thankful I never gave up,” says Allison, “There were many, many times when I thought having kids was not in the cards for us. I am also thankful that fertility issues are becoming less taboo, and people are able to speak more freely about their struggles.”

Allison is also happy to share that she and Matt look forward to welcoming a son in a few short months thanks to another successful IVF transfer cycle.

After trying for several months to get pregnant with no success, Christy decided to speak with her doctor. Christy and her husband James were about 40 years old, and they simply didn’t have time to continue to wait and see. The doctor suggested that they meet with a fertility specialist.

The specialist recommended Femara (letrozole), a drug typically used to treat postmenopausal women with breast cancer. The drug helps to slow breast cancer tumors. However, like Clomid, it can also be used to regulate ovulation in women with irregular cycles or anovulation (not ovulating).

The fertility specialist also recommended timed intercourse every other day during the week after Christy had her period. She says the medication was “intense” and it was a stressful time.

After three months of following this process, Christy conceived. Her pregnancy proceeded normally, but the worry wasn’t over yet. Their son arrived early, resulting in a C-section and premature birth. Then Christy and her new baby spent a week in the hospital, and she received daily insulin shots.

Now, five years later with a healthy son, Christy says, “I would do it all again. Even knowing everything that happened. It was all worth it.”

Manage Stress and Get Plenty of Rest

Michelle and her husband Thomas have a somewhat different — but no less surprising — story about their journey to getting pregnant.

Both in their 30s, they had tried for a baby on and off throughout their relationship. Yet, during their 15 years together, they had one miscarriage but no other pregnancies. They decided not to pursue fertility treatment. Instead, they began to consider adoption as a route to parenthood.

Then, in the summer of 2020, Michelle discovered she was pregnant. Nervous after the previous miscarriage, Michelle says she focused on not getting stressed. She also looked for ways to stay active and made sure she got plenty of rest.

Luckily, Michelle’s pregnancy continued with no problems. The couple welcomed their first child in February 2021. “Our successful pregnancy was a complete surprise,” says Thomas, “but we couldn’t be happier.” Their son is now crawling and will soon be walking. As for more children, Michelle and Thomas say they may still consider adoption. But, for now, they are just delighted to be a family.

Getting Pregnant with Fertility-Boosting Foods and Other Remedies

You can boost your health with a wide variety of foods and herbs that may improve fertility – thanks to their revitalizing ingredients.

If you’re looking for more tips for getting pregnant, you may want to try increasing the chances of conceiving by combining a healthy diet with Traditional Chinese Medicine (TCM) treatment.

But how does TCM work to increase your chance of getting pregnant? TCM physician Zhong Xi Ming explains, “Herbs and acupuncture can help improve the womb lining and enhance ovarian follicles. So, the patient has a stable womb lining when the embryo is transferred to it.”

Both TCM and Western medicine also agree that IVF treatment has a higher success rate when combined with acupuncture. A study by the Oregon College of Oriental Medicine, Oregon Health and Science University, and the Northwest Center for Reproductive Sciences in Washington shows that research subjects who did both IVF and acupuncture treatments had a higher rate of live births (50.8%) than those who only did IVF. The rate is 20% higher when the subjects complemented the treatments with traditional herbal medicine and a TCM-approved diet and lifestyle.

Getting pregnant may be more challenging than you expected. However, don’t lose heart. Consider trying natural ways to help conception. This includes a wide variety of TCM options. And even if you decide to try fertility treatment, these remedies can be an effective way to boost your health and support a successful pregnancy.

Gestational Diabetes Diet And Other Tips to Help You Cope

In this article, our experts provide tips for how to eat a gestational diabetes diet, including the best foods to keep you and your baby healthy.

Are you expecting or planning to get pregnant? This article will break down morning sickness symptoms and home remedies to help you to get through it.

Vaginal discharge make you uncomfortable? Learn to recognize when pregnancy discharge is normal and when you should contact your doctor.

Edible bird's nest drink, or bird's nest, contains nutrients essential for pregnant women. Some of its benefits are to support stronger pregnancies and healthier babies.

Having an ectopic pregnancy can be an emotionally overwhelming experience. Read on to learn more about how to spot the symptoms and what your recovery options are.

Are you in a Sexless Marriage? 6 Ways to Improve Libido