How To Soothe Your Endometriosis Symptoms For Good

While pelvic pain is sometimes the first sign that you may have endometriosis, it isn't always the reason. Learn how to spot uncommon endometriosis symptoms here and how to manage them using natural therpies. 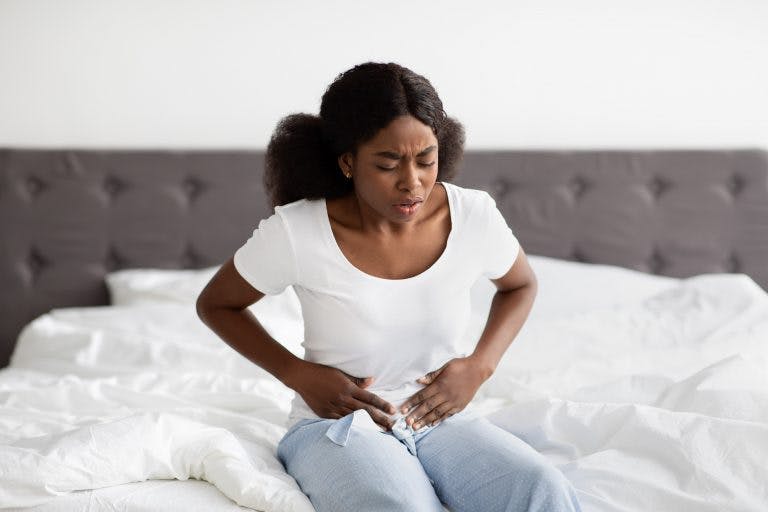 Endometriosis involve more than just pelvic pain. However, for many women, this is the first indication that something is wrong.

On the other hand, a woman may experience pelvic pain, but it isn’t always due to endometriosis. This can make it hard to know what’s really going on in your body.

In this article, our experts explain what endometriosis symptoms you should watch out for and natural remedies to help you feel better.

Endometriosis is a condition that occurs when tissue that normally grows inside the uterus starts to grow outside of it. Research shows that it affects up to 10 percent of American women aged 25 through 40.

Normally, during a woman’s menstrual cycle, tissue that lines the wall of the uterus builds up and sheds if she is not pregnant. However, for women with endometriosis, tissue that acts and looks like normal endometrial tissue begins to grow on other reproductive organs in the pelvic or abdominal cavity.

Every month, this tissue responds to a woman’s hormonal changes. It builds up and breaks down just like the tissue inside the uterus does, at the site of the tissue. The condition commonly occurs around these areas:

Doctors are not exactly sure what causes it. Some experts think that it may be due to pieces of tissue traveling back through the fallopian tubes and into the pelvic cavity.

Here, these pieces of tissue may become stuck on surfaces of reproductive organs where they continue to bleed during normal menstruation. This leads to pain and swelling in surrounding tissue. Eventually, cysts and scar tissue can form.

The condition is genetic. Therefore, if endometriosis runs in your family, then you may need to be aware of symptoms. Other risk factors include giving birth after age 30 and having .

It should be noted that your symptoms don’t reflect the severity of the condition. For example, a woman with advanced endometriosis may experience no symptoms at all. Other women may have severe symptoms but very little disease progression.

Endometriosis Symptoms, According To TCM

Endometriosis is diagnosed as “Zhen Jia,” menstrual cramps, and infertility in Traditional Chinese Medicine (TCM), according to its symptoms. It can be associated with pelvic pain, heavy periods, back pain, nausea, pain during or after sexual intercourse, pain with bowel movements, and pain when you pee.

Physician continued, “The of endometriosis are qi stagnation and blood stasis, a combination of phlegm, dampness, heat, as well as kidney deficiency.”

TCM believes stagnation results in pain. In order to relieve pain, the main treatment method includes promoting qi circulation and removing stasis. When circulation is smooth and regular, the pain will be relieved.

One treatment method for endometriosis involves removing phlegm, dampness and stasis. Dampness causes a person to feel heavy and lethargic, while phlegm can affect your sleeping quality, as well as mass formation. Strengthening the spleen and removing phlegm and dampness will relieve fatigue, and help to reduce mass. Invigorate kidney will help in infertility and regulating the menstrual cycle.

In Western medicine, there is no known cure or treatment for endometriosis. Your doctor may confirm your diagnosis by performing surgical procedure called a laparoscopy. This procedure involves inserting a small scope into the abdominal cavity to look for endometriosis tissue implants. He or she will try to remove these implants during the procedure. Your doctor may also take a biopsy of the tissue.

According to Physician m, . This includes red sage, red peony, peach kernel, and Gui Zhi Fu ling pills. Based on the pharmacological study on active components of five Chinese herbs of Gui Zhi Fu Ling pills, each herb is useful in endometriosis.

A series of studies proved that treating endometriosis with Gui Zhi Fu Ling pills along or in combination with western medicine achieved satisfactory curative effect, and was considered as an alternative medicine to treat endometriosis.

Additionally, studies have shown that french maritime pine bark extract and dill to help with easing menstrual cramps. Physician noted that when used alongside oral contraceptives, this combination could reduce endometriosis pain significantly.

Here are some other tips that may help:

Do These Treatments Support Fertility?

Infertility is one of many possible endometriosis symptoms. If you have endometriosis and have not been able to conceive, then your doctor may be able to increase your fertility through one of the following methods:

Precautions To Take When Seeking Treatment For Endometriosis Symptoms

Herbs for endometriosis usually function to promote circulation and remove blood stasis. Do not take herbs if you are consuming blood-thinning medication, such as warfarin in view of the possible adverse effects, such as bleeding.

These herbs should not be taken during pregnancy because they could stimulate uterine contractions and possibly cause miscarriage. Consult a TCM practitioner and do not self-medicate when you have other underlying medical conditions or are pregnant or having menstruation.

In addition, consult a doctor when you experience , so that he/she can conduct the appropriate examination to diagnose the condition. The examinations can include pelvic examination, ultrasound, MRI or laparoscopy.

How to Lower High Blood Pressure in Pregnancy

High blood pressure in pregnancy can lead to serious health problems for both mother and baby. Learn how to manage blood pressure through simple, lifestyle changes.

How To Deal With Your Irregular Periods

Not sure what's causing your irregular periods? Our experts weigh in on internal and external factors that may be to blame and provide management tips for getting your cycle back on track.

Eating the right foods during the early signs of pregnancy can ensure healthy fetal development. Discover eating do’s and don’ts for expectant mothers during the first trimester.

What Is an Incompetent Cervix And Does It Cause Miscarriage?

An incompetent cervix is a heartbreaking condition that leads to miscarriages. However, many women don't know they have it until they've had several miscarriages.

Vaginal discharge make you uncomfortable? Learn to recognize when pregnancy discharge is normal and when you should contact your doctor.

Edible bird's nest drink, or bird's nest, contains nutrients essential for pregnant women. Some of its benefits are to support stronger pregnancies and healthier babies.