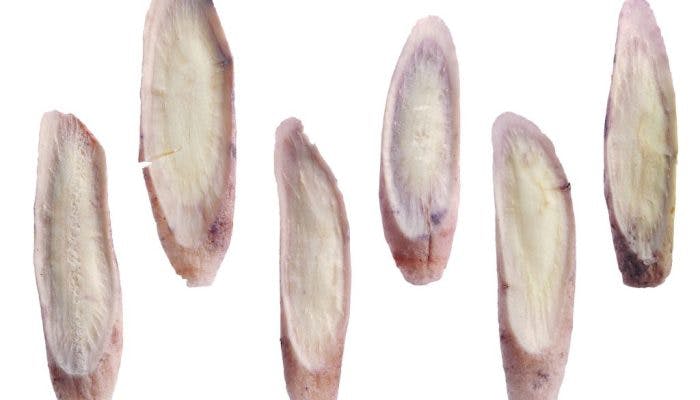 Willowleaf Swallowwort Rhizome (bai qian, 白前) refers to the root of the plant Cynanchum stauntonii. This plant is a cylindrical and branched plant that is native to several provinces in China. It can reach a height of one metre, with narrow and lance-like leaves and flowers that range from yellow, red, brown to black.

Externally, Bai Qian is yellowish-white or yellowish-brown in appearance. The herb is coiled together in a branchy, fibrous mass that can reach up to six inches in length.

In Traditional Chinese Medicine (TCM), Bai Qian falls under the category of ‘Warm herbs that transform phlegm and stop cough’. In TCM, phlegm is caused by Stagnation of fluids which tend to start in the Spleen and move towards the Lungs. If this accumulates, fluids thicken and become pathological phlegm. While it often starts as being Cool, phlegm later transforms to Hot as the condition worsens. ‘Warm herbs that transform phlegm and stop cough’ are usually used to treat the early stages of such Stagnation, such as Cold-Phlegm and Wet-Phlegm with symptoms of wheezing, vomiting and nausea.

Warm in nature, Bai Qian can help individuals with too much Cold in their body, such as those experiencing a Yin Excess or a Yang Deficiency, to restore a harmonious yin-yang balance. Pungent and sweet in taste, the herb can promote the circulations of qi and body fluids. Bai Qian can also slow down acute reactions, detoxify the body and has a tonic effect on the body by replenishing qi and blood. In particular, the herb targets the Lungs.

Bai Qian can direct qi downwards to eliminate phlegm. While it is Warm in nature, the herb is neither dry nor drastic. Thus, Bai Qian can gently direct Lung-qi downwards and resolve phlegm to relieve related symptoms such as cough, dyspnea, wheezing and fullness in chest. For cough and dyspnea caused by Cold-phlegm, Bai Qian can be combined with other warming herbs such as White Mustard Seeds (白芥子, bai jie zi) and Pinellia (半夏, ban xia) to enhance its effectiveness.

In addition to treating coughs, Bai Qian is also used to treat internal fevers and bronchitis.

How to Use Willowleaf Swallowwort Rhizome (Bai Qian)

The recommended daily dosage of Bai Qian is 3 – 10g, when consumed as a decoction or in the form of pills or powder. To enhance its effectiveness in treating Lung-Yin Deficiency and the reversed flow of qi, Bai Qian can be processed with honey.

Cautions and Side Effects of Willowleaf Swallowwort Rhizome (Bai Qian)

In addition, because of the herb’s effects on the Lungs, patients with asthma should use Bai Qian with caution. Over-consuming Bai Qian may cause stomach irritation in some sensitive individuals as well.

Here is a summary for Willowleaf Swallowwort Rhizome (Bai Qian):