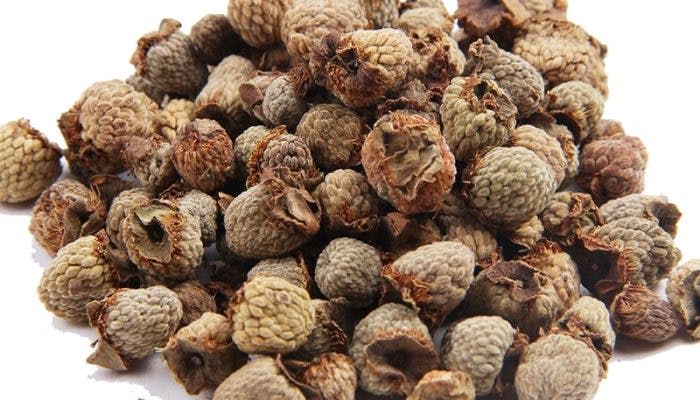 In Traditional Chinese Medicine (TCM), Palmleaf Raspberry Fruit falls under the category of ‘Herbs that stabilize and bind’. Such herbs are used to treat symptoms of abnormal discharges and the displacement of organs, such as diarrhoea, heavy sweating, discharges from the vagina, penis or rectum, as well as prolapse of the uterus or rectum.

Warm in nature, Palmleaf Raspberry Fruit can help individuals who have too much Cold in their body, such as those experiencing a Yin Excess or a Yang Deficiency, to restore a healthy yin-yang balance in the human body. Sour and sweet, the herb can aid digestion, restrain abnormal discharges of body fluids, slow down acute reactions, detoxify the body, and has a tonic effect on the body by replenishing qi and blood. In particular, the herb targets the bladder and the Kidneys.

Through tonifying the Liver and Kidneys, Palmleaf Raspberry Fruit can also improve vision, For dim and poor vision caused by Liver and Kidney Deficiency, the herb can be used alone for a long period of time, or combined with other Liver or Kidney-tonifying herbs for consumption. In addition, the herb can address back pain and soreness as well.

Studies have also indicated that Palmleaf Raspberry Fruit may contain estrogen-like effects. Palmleaf Raspberry Fruit may be able to protect your heart by maintaining the health of your cardiovascular tissue and keeping your blood pressure stable. With high levels of estrogen, your body can help to keep blood triglycerides low, increase HDL cholesterol and lower LDL cholesterol.

Palmleaf Raspberry Fruit may also protect your brain by maintaining a proper blood flow in your body. It can protect against inflammation, improve memory, increase focus and fine motor skills. The herb may also be able to improve muscle mass and bone density to protect against osteoporosis. In addition, Palmleaf Raspberry Fruit may help to boost your mood by preventing mood swings, regulating serotonin levels and encouraging nerve growth.

How to Use Palmleaf Raspberry Fruit (Rubus Chingii Hu)

Palmleaf Raspberry Fruit should not be used by patients who are experiencing Yin Deficiency, scanty and dark urine, burning urination caused by Damp-Heat in the Lower Jiao, or frequent erections.

While there are no known side effects from high dosage or chronic use of Palmleaf Raspberry Fruit, it is best to consult your healthcare provider before deciding to add the herb to your healthcare routine.