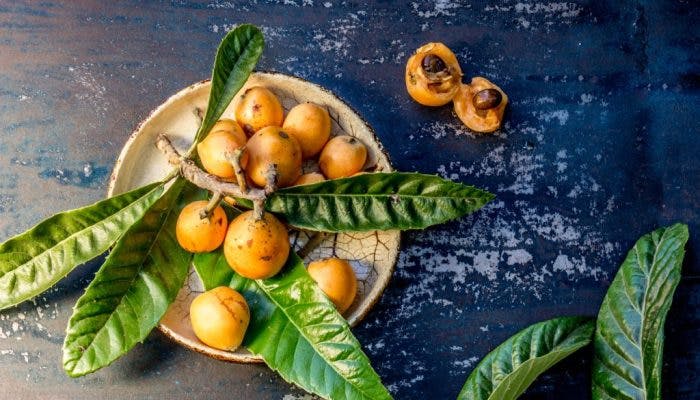 What is Loquat Leaf (Folium Eriobotryae)?

Loquat Leaf (pi pa ye, 枇杷叶), also known as Folium Eriobotryae, comes from the Loquat Tree, which is a type of fruit tree that grows in the tropics and subtropics. Similar to an evergreen tree in its appearance, the Loquat Tree produces round fruits that range in colour from white to orange.

Considered to be a delicacy in some Asian countries, the Loquat Tree is also cultivated for its medicinal uses. The leaves of the tree are gathered in late Spring and early Summer. These Loquat Leaves are then dried under the Sun, its soft, external hairs are then brushed off, and the leaves are cut into small pieces for medicinal usage.

In Traditional Chinese Medicine (TCM), Loquat Leaf falls under the category of ‘Herbs that relieve coughing and wheezing’. Such herbs can treat symptoms of Fluid Stagnation, which thickens to become pathological phlegm when accumulated. Cool in nature, this herb can help individuals who have too much Heat in their bodies, such as those experiencing a Yang Excess or a Yin Deficiency, to restore a harmonious yin-yang balance.

Bitter in taste, Loquat Leaf can cleanse the body by clearing Heat, drying Dampness and promoting elimination via urination or bowel movements. In particular, the herb targets the stomach and the Lungs.

Loquat Leaf can clear Lung Heat and direct Lung qi downwards to resolve phlegm, stop cough and relieve dyspnea. For Lung Heat cough with symptoms of yellow and sticky phlegm, Loquat Leaf is frequently combined with other herbs that can reinforce the actions of clearing Lung Heat and resolving phlegm to enhance its effectiveness. For chronic cough caused by Lung Deficiency, Loquat Leaf is often combined with other qi-tonifying or Lung-moistening herbs to enhance its actions.

Other than the above Loquat Leaf benefits, modern studies have suggested that Loquat Leaf contains antioxidants, linoleic acids and plant sterols that encourage liver functions. Thus, this herb may be able to support liver health. The triterpenes in Loquat Leaf may also help to promote healthy blood sugar levels, and even cholesterol levels. Its potassium and magnesium content are also essential for blood pressure regulation and the proper functioning of arteries. Loquat Leaf may also protect against heart diseases by reducing inflammation and preventing cellular damage through its carotenoids and phenolic compounds.

As Loquat Leaf is a source of beneficial antioxidants, the herb can help to counter oxidative damage caused by free radicals, which then prevent neurodegenerative disorders and support brain health. Some research also suggests that the extracts of Loquat Leaf have anti-cancer effects. The dietary fibre in Loquat Leaf may also promote bowel movements to aid digestion, relieve stomach disorders and promote weight loss.

Loquat Leaf is also a wonderful source of Vitamin C, which may help to stimulate the production of white blood cells and prevent chronic illnesses. Vitamin C is also required for the production of collagen, which may aid the growth and repair of tissues throughout the body. This may also improve skin health by addressing skin conditions such as hormonal acne. Other studies have shown that Loquat Leaf may be able to support bone health by enhancing new bone formation and stimulating osteoblast differentiation as well.

When used in topical creams, Folium Eriobotryae can be a remedy for red, irritated skin caused by the environment. Its soothing benefits can also be applied to uncomfortable, swollen gums.

How to Use Loquat Leaf (Folium Eriobotryae)

The recommended daily dosage of Folium Eriobotryae is 4.5 – 12g, when in dried form and boiled in water as Loquat Leaf tea or decoction. If the leaves are fresh, larger amounts of 15 – 30g can be used.

To prevent throat itching, you can wrap the leaves and boil them in water to make a decoction and consume it. To relieve cough, you can stir-bake the herb with honey.

Dried Loquat Leaf can be found at some Asian markets and specialty stores. Fresh Loquat Leaves may be found in regions where Loquat is grown locally, such as Hawaii, California and states along the Gulf of Mexico.

Cautions and Side Effects of Loquat Leaf (Folium Eriobotryae)

Loquat Leaf should not be used by individuals who are experiencing cough caused by Excess Cold, nausea or vomiting caused by stomach Cold.

Also, the hair-like fuzz on fresh Loquat Leaves may irritate the mucosa to cause coughing, edema and larynx spasms. Hence, the fresh herb should be scrubbed or wrapped in cloth when you have skin contact with it.

It is recommended that Folium Eriobotryae should not be used for a long-term basis, and patients should never exceed the maximum recommended dosage. Excess intake of this herb may cause toxic myopathy, which translates to weakness and non-specific pain.

Here is a summary for Loquat Leaf (Folium Eriobotryae):