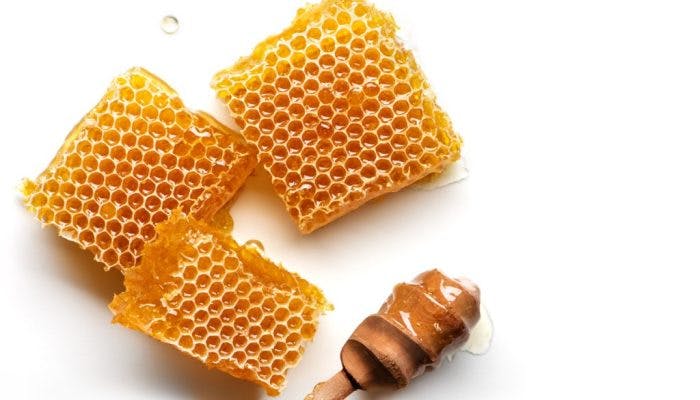 What is Honeycomb (Feng Fang)?

Honeycomb (feng fang, 蜂房) is made by honeybees to store honey and pollen, or to house their larvae. Made of beeswax, Honeycomb is made of completely natural hexagonal cells that contain raw honey. It may also contain bee pollen, propolis and royal jelly, which are also bee products known for its health benefits.

In Traditional Chinese Medicine, Honeycomb falls under the category of ‘Herbs that dispel Wind and Dampness’. Such herbs can help to treat ‘bi pain’ (painful obstruction), which refers to arthritic and rheumatic conditions with pain, stiffness and numbness of the bones, joints and muscles.

Neutral in nature, Honeycomb does not affect the yin-yang balance in your body. Sweet in taste, the herb can slow down acute reactions, detoxify the body and has a tonic effect on the body by replenishing qi and blood. In particular, the herb targets the stomach.

Also, Honeycomb has pain-relieving effects. For example, it can relieve swelling and pain caused by bee stings.

Rich in carbohydrates and antioxidants, Honeycomb can fight signs of aging and prevent chronic diseases. As it has not been processed, Raw honey contains enzymes like glucose oxidase, which gives it antimicrobial and antibacterial properties. This herb can thus promote immunity, reduce inflammation and lower the risk of diabetes, dementia, heart diseases and even certain types of cancer.

As it contains beeswax, Honeycomb also providers long-chain fatty acids and alcohols which are beneficial for the heart. These compounds may even help to lower cholesterol levels. The antioxidants in Honeycomb may also help to dilate the arteries leading to your heart, which increases blood flow and lower blood pressure, consequently reducing the risk of blood clots, heart attacks and strokes. Hence, Honeycomb is an excellent alternative to sugar.

Aside from improving heart health, Honeycomb can also boost liver health. As it contains natural alcohols with hepatoprotective qualities, this herb may have the ability to prevent liver damage and improve liver functions, including individuals with fatty liver diseases.

Honeycomb is also a natural Cold remedy and a go-to for individuals with seasonal allergies. It can calm inflammation in the Lungs and respiratory tract, which relieves scratchy throats. In addition, Honeycomb can also increase the production of melatonin in your body, which increases sleep quality. It also causes a rise in insulin and triggers serotonin, which boosts one’s mood.

How to Use Honeycomb (Feng Fang)

Honeycomb can be added to almost every dish or drink you consume. For example, you can use Honeycomb in your favourite tea as a sugar replacement.

Try adding Honeycomb to your slice of bread or toast to enjoy its delicious texture. Another healthy way to consume Honeycomb is to add it to your bowl of salad. Honeycomb can be melted to be used as cough syrup or sucked on to soothe sore throats.

Even for desserts like cake and waffles, you can also add Honeycomb to the batter of your dessert before you bake it or spread it over your waffle afterwards. Honeycomb can also be used as a topping on the top of the ice-cream.

Alternatively, you can eat Honeycomb on its own too!

Beeswax is also found in many commercial products, such as skincare products. For example, Beeswax can be found in many lip balms today.

Cautions and Side Effects of Honeycomb (Feng Fang)

Honeycomb should not be used by individuals who are experiencing Qi Deficiencies, Blood Deficiencies or open, pus-filled sores.

As it contains honey, consuming Honeycomb carries the risk of triggering spores from botulinum. This is especially detrimental to pregnant women and children below the age of 12 months.

In addition, individuals with allergies to bee venom or pollen should use this herb with caution to prevent triggering their allergies. Also, while Honeycomb is a healthy alternative to sugar, it is still sweet, so do consume it in moderation.

Here is a summary for Honeycomb (Feng Fang):