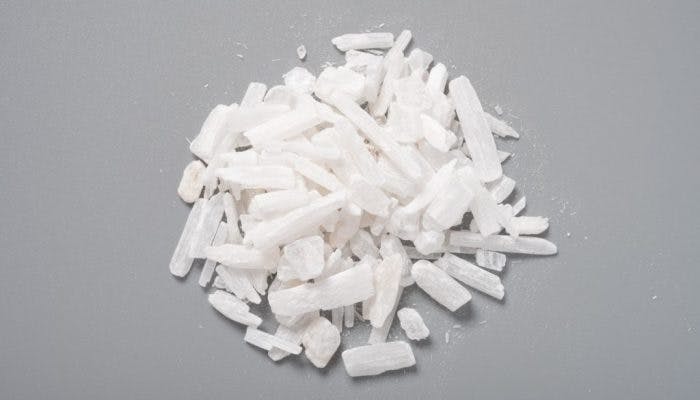 What is Gypsum Powder?

Gypsum powder (shi gao, 石膏), also known as Gypsum Fibrosum, is a natural mineral composed of Calcium Sulfate. Most commonly known for its use in making products such as drywall, plaster and other industrial materials, Gypsum is actually also a vital component of Traditional Chinese Medicine (TCM).

The most common type of Gypsum Powder is fibrous Gypsum, which is translucent and has a silky, satiny appearance. It is typically found in old ocean beds and sedimentary rocks such as limestone. Gypsum Powder is formed by cyclical evaporation and rehydration of soils rich in calcium and sulfates.

In addition to its healing properties, Gypsum Powder is used for jewelry and as an ornamental stone. The ancient Egyptians also used Gypsum Powder to plaster their walls, carve statues, as an adhesive, and as a filler in pigments.

In TCM, Gypsum Powder falls under the category of ‘Herbs that clear Heat and purge Fire or clear Summer Heat’. Such herbs are used to clear inflammatory and infectious conditions, referred to as ‘Internal Heat’ in TCM. Cold in nature, Gypsum can help people who have too much ‘Heat’ in their body, such as those with Yang Excess or Yin Deficiency, to restore a healthy yin-yang balance.

Pungent and sweet, Gypsum Powder promotes the circulation of qi and body fluids. Also, Gypsum Powder can slow down acute reactions, detoxify the body and has a tonic effect on the body by replenishing qi and blood. In particular, Gypsum Powder targets the Lungs and the stomach.

Functions and Benefits of Gypsum Powder

Gypsum Powder can clear Excess Heat and drain Fire, in particular Heat in the Lungs and the stomach. This means that it can address symptoms such as high fever with no chills, excessive thirst, sweating, irritability, and red tongue with yellow coat.

Also, Gypsum Powder can relieve thirst and restlessness. In addition, Gypsum can be taken internally or applied topically to relieve burns, abscesses and eczema and ulcerated sores.

Modern studies have also suggested that Gypsum Powder can help with healthy bone growth due to its calcium contents. Individuals who have or are at risk of developing osteoporosis can use Gypsum Powder to supplement their calcium intake.

How to Use Gypsum Powder

The recommended dosage of Gypsum is 15 – 60g per day, if ground into a powder and used in a decoction. Some healthcare providers may recommend a slightly lower dose of 9 – 30g. It is best to consult your healthcare provider on the exact dosage suitable for you. If Gypsum is used externally. It should be heated (calcined) and pulverized first before usage.

Whole blocks or strands of Gypsum can be found at some herbal stores. Gypsum powder, on the other hand, is more readily available in many Asian specialty markets and herbal shops.

Cautions and Side Effects of Gypsum Powder

Gypsum Powder should not be used by individuals who have a weak stomach, weak pulse or Yang Deficiency. Also, Gypsum may interfere with drugs prescribed for diabetes.

Some side effects associated with Gypsum Powder include bloating, gas and constipation.

In addition, do note that adults should not consume more than 2500 mg of calcium per day. This may cause toxicity symptoms such as nausea, abdominal pain, constipation, vomiting, loss of appetite, fatigue, high blood pressure, frequent urination, confusion and coma. Getting too much calcium could also interfere with zinc and iron absorption, increasing your risk for deficiencies of these nutrients.

We strongly advise you to consult your healthcare provider first before adding Gypsum Powder to your diet!

Here is a summary for Gypsum: