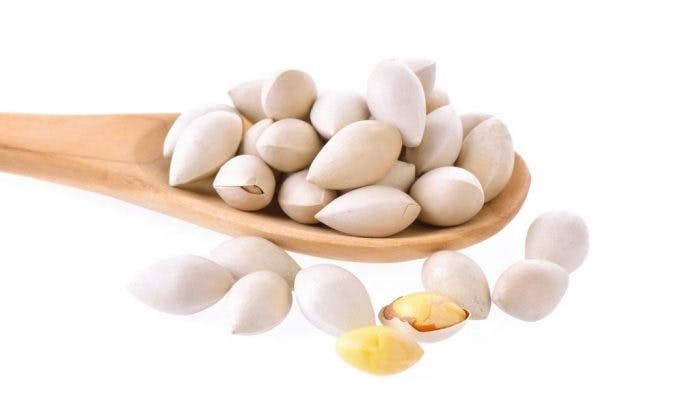 What is Ginkgo Seed?

Ginkgo Seed (bai guo. 白果), also known as Ginkgo Biloba or Ginkgo Nuts, came from the Gingko Tree, one of the living fossils on Earth. The plant has existed since 270 million years ago, and it has been cultivated in China since 2600 BC. In other words, it has existed before the Ice Age. Some Gingko trees even survived the atomic blast at Hiroshima in 1945. A single ginkgo tree can live as long as 1,000 years and grow to a height of 120 feet. It has short branches with fan-shaped leaves and produces inedible stinky fruits (that contain edible inner seeds).

In many Eastern cultures, the Gingko tree is considered to be a sacred tree as it is seen as a symbol of resilience, health and longevity. Ginkgo Seed is an excellent herbal supplement and source of antioxidants, and it is famous for its effects on conditions related to poor memory such as dementia caused by poor circulation. Due to its numerous health benefits, the Chinese have been using Ginkgo seeds for many decades for both culinary and medicinal purposes.

In Traditional Chinese Medicine (TCM), Ginkgo Seeds belong to the category of ‘Herbs that stabilize and bind’. Such herbs are used for treating abnormal discharges and displacement of organs, which include conditions such as diarrhea, discharges from the vagina, penis or rectum. However, these herbs can only treat symptoms. They should not be used to treat any underlying deficiency.

Neutral in nature, Ginkgo Seeds do not really affect the yin-yang balance in your body.

With a bitter and sweet taste, Ginkgo Seeds tend to have a cleansing action on  the body by clearing Heat, drying Dampness, and promoting elimination via urination or bowel movements. It also tends to slow down acute reactions and detoxify the body. Ginkgo Seeds also replenish our qi and blood, which has a tonic effect on the body. As interpreted from the taste, Ginkgo Seeds target the Lungs, which are thought to be a key part of the production chain for qi and the body fluids.

Functions and Benefits of Ginkgo Seed

Ginkgo Seed can stop coughing and expel phlegm. This herb can tackle Dampness in our body to regulate phlegm, so it is often used to treat phlegmatic dyspnea (shortness of breath) and cough.

Ginkgo Seed can stop leakage of bodily fluids. This herb has astringent properties, which helps to strengthen the Lower Energizer, reduce Dampness and regulate turbid discharges. Hence, the herb is often used to stop leukorrhagia and reduce urination.

Other than the above Ginkgo benefits, modern studies have also discovered many new benefits that Ginkgo Seed can bring to the human body.

Also, Ginkgo Seed is effective in increasing blood flow to various parts of the body by promoting the dilation of blood vessels. One study in people with heart disease who supplemented with ginkgo revealed an immediate increase in blood flow to multiple parts of the body. This was attributed to a 12% increase in levels of circulating nitric oxide, a compound responsible for dilating blood vessels. This means that it may be applied towards the treatment of diseases related to poor circulation.

Not only that, Ginkgo Seeds have also been repeatedly studied for its suggested ability in reducing anxiety, stress, and other symptoms associated with Alzheimer’s Disease.

A handful of studies also highlighted that Ginkgo Seed may enhance brain functions and increase both mental performance and perceived well being. Results of these studies have identified an association between the consumption of Ginkgo Seeds and improved memory, focus and attention span.

How to Use Ginkgo Seed

Other than Ginkgo supplements in the form of oral tablets, extracts and capsules, Ginkgo Seeds are also commonly available in the market as tea.

We can also cook Gingko Seeds before adding it to our food or diet. It is important to note that we should never eat raw or roasted Ginkgo Seeds as they can be poisonous.

Two dishes that Ginkgo Seeds are frequently added to are soup and porridge as they are easy to prepare. Simply clean five Ginkgo Seeds with water, peel and take the kernel. Place them into the pot along with 100g of rice, add an appropriate amount of water, boil for about 25 to 30 minutes, and you can enjoy the delicious bowl of goodness when it is ready.

Cautions and Side Effects of Ginkgo Seeds

Ginkgo seeds should not be used when we are experiencing Excess Cold-Dampness. The herb should also be used with caution when there is thick sputum that is difficult to expectorate out of our body.

Ginkgo seeds have also been reported to cause side effects such as headache, dizziness, heart palpitations, upset stomach, constipation and allergic skin reactions.

It’s crucial to note that one should not consume Ginkgo Seeds raw, as this unprocessed herb is toxic. it is also strongly not recommended for frequent consumption or in large doses.

Last but not least, Gingko Seeds have been found to interfere with the effectiveness of the following drugs:

Here is a summary for Ginkgo Seeds: