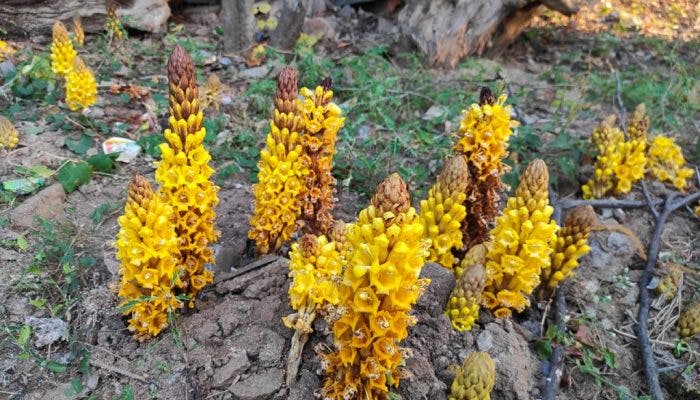 Desert-living Cistanche (rou cong rong, 肉苁蓉) refers to the fleshy stems of Cistanche deserticola, a hardy and shrub-like plant that is native to the desert regions of Mongolia and northern China. Shaped somewhat like a cross between a pine cone and a pineapple, this plant has thick fleshy stems and large yellow flowers. As the number of Cistanche deserticola in the wild has been dwindling due to overgrazing, it is listed as an endangered species on CITES Appendix 2.

Prized as the ‘desert ginseng’ due to its healing properties that resemble that of Ginseng, Rou Cong Rong was once a demanded imperial tribute in ancient dynasties. In recent years, this tonic herb was given another title – ‘natural viagra’. This is due to its unique efficacy in treating fatigue and sexual potency.

Usually harvested in Spring, the stems of Cistanche deserticola are gathered, dried under the sun and cut into slices for medicinal use. It can be used raw or processed with wine.

In Traditional Chinese Medicine (TCM), Rou Cong Rong falls under the category of ‘Tonic herbs for Yang Deficiency’. Such herbs are used for patterns of Deficiency to replenish one’s ‘Four Treasures’ (qi, blood, yin, yang). Warm in nature, Rou Cong Rong can help individuals with too much Cold in their body, such as those experiencing a Yin excess or a Yang Deficiency, to restore a harmonious yin-yang balance.

Rou Cong Rong can tonify Kidney-yang, as well as supplement jing (essence) and blood. The herb is thus indicated for impotence, premature ejaculation, sterility due to Cold in womb, soreness and pain of lumbar and knees, atrophy-flaccidity caused by Kidney-Yang Deficiency, and other symptoms caused by Kidney-Yang Deficiency. The herb is also used to treat symptoms caused by the insufficiency of essence and blood, such as dizziness, tinnitus, deafness and the early whitening of beard and hair.

Rou Cong Rong can also moisten intestines to treat constipation caused by Blood Deficiency or intestinal Dryness. In addition, Rou Cong Rong may be effective in promoting urination as well.

Modern studies suggest that Rou Cong Rong may promote Liver glycogen synthesis, which can protect the Liver, promote physical recovery and reduce chronic fatigue. A natural source of echinacosides, which have anti-ageing and antioxidant properties, Rou Cong Rong, which makes it a great anti-inflammatory agent. This makes it an effective treatment for Kidney disorders such as diabetes, fight signs of ageing, increase stamina and boost immunity.

Rou Cong Rong may also promote Heart health by protecting the ischemic myocardium, lowering blood fat levels and blood pressure levels, as well as eliminating fatty liver. Studies have also demonstrated that Rou Cong Rong can boost sex drive and increase libido in men and women. An effective treatment for sexless marriages, the herb contains acteoside, salidroside and other chemical ingredients that can effectively promote the function of the central nervous system, enhance the secretion of hormones and release neurotransmitters.

How to Use Desert-living Cistanche (Rou Cong Rong)

The recommended daily dosage of Rou Cong Rong is 10 – 15g, when boiled in water for oral consumption.

Dried Rou Cong Rong is available in many herbal shops and Asian markets. They can be steeped in boiling water to make tea. Some shops also sell Rou Cong Rong in forms such as powder and extracts.

Cautions and Side Effects of Desert-living Cistanche (Rou Cong Rong)

Rou Cong Rong should not be used by individuals who are experiencing Yin Deficiency with Heat signs, stagnation of excess Heat, and diarrhea caused by Spleen Deficiency, Stomach Deficiency or pathogenic Heat.

Do note that Rou Cong Rong may increase the activities of neurotransmitters such norepinephrine, dopamine, and serotonin in the hypothalamus. The herb may also interact with sympathomimetics, monoamine oxidase inhibitors, selective serotonin reuptake inhibitors and tricyclic antidepressants.

Here is a summary for Desert-living Cistanche (Rou Cong Rong):