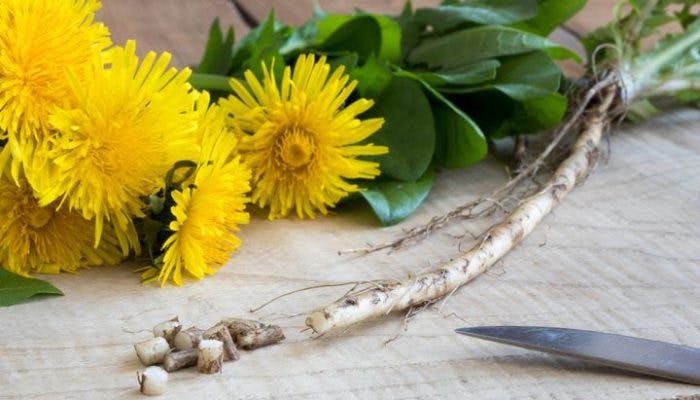 What is Dandelion (Pu Gong Ying)?

Dandelion (pu gong ying, 蒲公英), also known as Herba Taraxaci, are thought to have evolved about 30 millions year ago in Eurasia. First recorded in China by the Tang Materia Medica, Dandelion is a well known food source that has been used for its psychic properties and healing properties. In the West, Dandelions are said to be able to repel witches if gathered on Midsummer’s Eve. The plant is also said to be able to increase one’s psychic abilities.

Once served as Victorian era delicacies eaten by the gentry, Dandelion flowers and greens are often used in dishes such as salads and sandwiches. In addition, Dandelions are also used in desserts and in the making of Dandelion Wine. High in protein, the ground, roasted roots of Dandelions can also be used to make caffeine-free Dandelion coffee. Dandelion is also one of the key ingredients of Root Beer.

In Traditional Chinese Medicine (TCM), Dandelion falls under the category of ‘Herbs that clear Heat and relieve toxicity’. Such herbs are used to clear inflammatory and infectious conditions that are referred to as ‘Internal Heat’. With both antibacterial and antiviral properties, such herbs can relieve toxicity while removing infectious toxins from the body.

Cold in nature, Dandelion can help individuals who have too much Heat in their body, such as those experiencing a Yang Excess or a Yin Deficiency, to restore a healthy yin-yang balance. Bitter and sweet, Dandelion can cleanse the body by clearing Heat, drying Dampness and promoting elimination via urination or bowel movements. Also, the herb can slow down acute reactions, detoxify the body, and has a tonic effect on the body by replenishing qi and blood. In particular, the herb targets the Liver and the stomach.

Dandelion can clear Heat and remove toxicity to heal sores and abscess caused by Heat-toxicity, be it interior or exterior. For example, the herb can address dermal sores, deep-rooted boils, furuncles with swollen pain, intestinal abscess with abdominal pain and  pulmonary abscess with purulent vomiting. As it can also relieve depression and promote lactation, Dandelion is regarded as a vital herb in the treatment of mammary abscess caused by the accumulation of Heat-toxicity in the Liver and stomach. In addition, fresh Dandelion can be applied topically to treat venomous snake bites.

As Dandelion can clear both Fire-Heat and Heat-toxicity from the Lung, Liver and stomach meridians, the herb is commonly used in the treatment of swollen and sore throats, swelling and pain in gums, and pink eyes with swollen pain.

Dandelion can also remove Damp-Heat from the body and induce diuresis to relieve Damp-Heat syndromes such as stranguria. For stranguria, Dandelion is often combined with other diuresis-inducing and stranguria-relieving herbs to enhance its effects. Other Damp-Heat symptoms include diarrhea and dysentery.

Other than the above Dandelion benefits, modern studies have shown that Dandelion is full of potent antioxidants and anti-inflammatory properties, which means that this herb can fight signs of aging, lower the risk of chronic diseases, protect against cell damage and reduce oxidative stress.

Containing chicoric and chlorogenic acid, Dandelion may improve the secretion of insulin to regulate blood sugar levels and the absorption of glucose in muscles. Dandelion may also decrease triglyceride and cholesterol levels, which then reduce the risk of heart diseases. Some studies suggest that Dandelion extract may promote liver health and prevent liver damage as well. However, as most of these findings are derived from animal studies, more research is required to ascertain the effects of Dandelion on the heart and blood sugar levels.

Dandelion is often used to treat constipation and improve digestive health. Rich in the prebiotic fiber insulin, Dandelion root can promote the movement of food through the digestive system. In addition, the herb is suggested to have the ability to boost immunity and manage skin problems such as acne. Older research suggested that Dandelion extract may reduce skin inflammation and irritation while increasing hydration and collagen production.

How to Use Dandelion (Pu Gong Ying)

Dandelion leaves, Dandelion stems and Dandelion flowers are often consumed in their natural state, cooked or raw. Dandelion root is available fresh and in the form of dried roots.  Dried Dandelion Roots can be used as a tea or coffee substitute. Dandelion is also available in supplement forms such as capsule, extract and tincture.

Currently, there are no clear guidelines on the recommended dosage for Dandelion. When boiling Dried Dandelion Root to make Dandelion tea, usually about 3-5g of the herb is used.

Cautions and Side Effects of Dandelion (Pu Gong Ying)

As Dandelion can stimulate the production of bile, it should not be used by patients with gallstones or obstruction of the bile ducts. Also, patients experiencing stomach ulcers or gastritis should avoid this herb as it may stimulate an overproduction of stomach acid. Patients experiencing a Yang Deficiency or a weak Spleen should not use this herb as well.

Some side effects of this herb include triggering allergic reactions like hives, itching and rashes. Excessive doses of Dandelion may cause gastrointestinal reactions such as nausea, vomiting, abdominal discomfort and diarrhea.

In addition, Dandelion may interact with certain medications. Hence, if you are taking any prescribed medicine, it is best to consult your healthcare provider before deciding to add Dandelion to your healthcare routine!

Here is a summary for Dandelion (Pu Gong Ying):