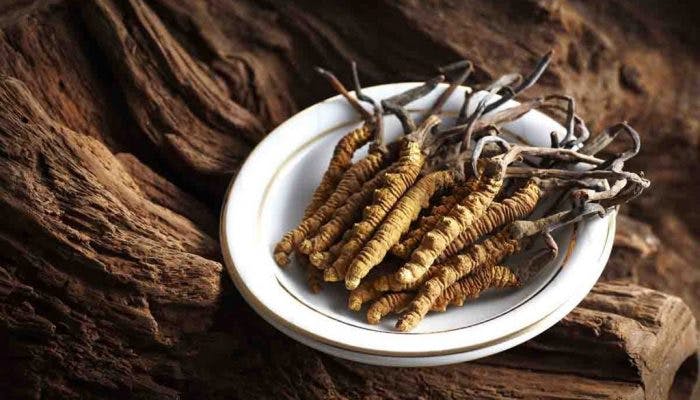 What is Chinese Caterpillar Fungus (Cordyceps)?

Chinese Caterpillar Fungus (dong chong xia cao, 冬虫夏草), also known as Cordyceps, is one of the most valued tonic herbs in Traditional Chinese Medicine (TCM). Along with Ginseng and Deer Antler, they are hailed as the top three tonics in TCM. Cordyceps has been used in China for thousands of years, and was later on introduced to the rest of the world when a French traveler stumbled upon this herb in 1723.

A Chinese Caterpillar Fungus (Cordyceps) is formed when a parasitic fungus parasitizes the larvae of ghost moths, replaces its tissue, and eventually grows out of the head of a dead caterpillar. The herb is composed of the insect’s body and the connected fungal stroma that grows from the insect’s head.

This precious herb cannot be cultivated, as it can only be harvested from the wild. In particular, it is usually only found in the high parts of the Tibetan Plateau.

In TCM, Cordyceps belongs to the category of ‘Tonic herbs for Yang Deficiency’. This herb is used for patterns of Deficiency to replenish one’s ‘four treasures’ (qi, blood, yin and yang).  Warm in nature, Chinese Caterpillar Fungus can help individuals who have too much ‘Cold’ in their body to restore a healthy yin-yang balance, such as those who are experiencing Yin Excess or Yang Deficiency.

Sweet in taste, the herb can slow down acute reactions and detoxify the body. It also has a tonic effect because it can replenish qi and blood in our body. In particular, Cordyceps targets the Kidneys and the Lung.

Functions and Benefits of Cordyceps

Secondly, Cordyceps can treat Deficiency of Kidney Yang and insufficiency of Kidney Essence by tonifying the Kidneys and nourishing Essence. Thus, this helps to support the functions of Kidneys and improve our vitality For example, it is often used to treat chronic fatigue, impotence and premature ejaculation with thin semen. Hence, this herb is a great energy booster.

Other than the above Cordyceps benefits, modern studies have also discovered that Cordyceps can boost exercise performance by increasing the body’s production of the molecule adenosine triphosphate (ATP), which is essential for delivering energy to the muscles. This may improve the way your body uses oxygen, thus improving your performance during exercise.

Also, Cordyceps has been used to help the elderly reduce fatigue, fight depression and boost strength. Several studies have found that Cordyceps can increase antioxidants, which then help to improve memory and sexual function.

How to Use Cordyceps

As mentioned, Cordyceps is difficult to harvest, and it thus carries a price tag that can go up to more than USD 20,000 per kg.

Hence, most individuals choose to consume supplements that contain small amounts of Cordyceps instead, such as pills, powder, extracts or tinctures. The recommended daily dosage of Cordyceps is 6-12g.

Other than these Cordyceps uses, some individuals also will add Cordyceps to their dishes, such as Cordyceps Soup.

Cautions and Side Effects of Cordyceps

Cordyceps should be used with caution when the individual is experiencing an Exterior condition. Other individuals who should avoid consuming the herb include pregnant or breastfeeding women and individuals who are experiencing autoimmune diseases. It is also not recommended for those who are displaying influenza-like symptoms.

Some common side effects that come with consuming Cordyceps include diarrhea, constipation and stomach discomfort.

Also, as Cordyceps may increase the risk of bleeding during surgery, it is advised that patients who have a scheduled surgery should avoid consuming the herb at least 2 weeks before the surgery.

Here is a summary for Cordyceps: