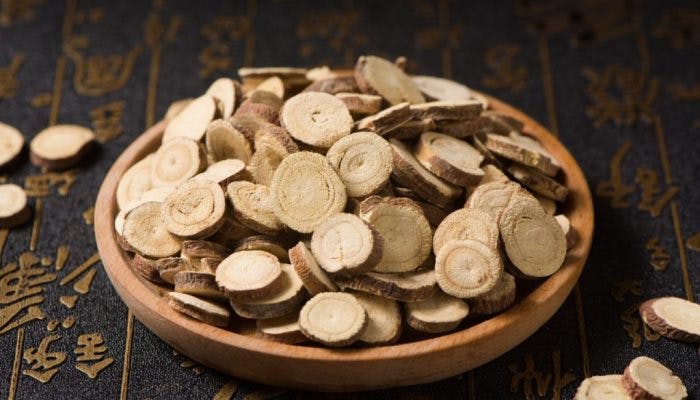 What is Chinese Licorice Root?

Not only is it said to be the most widely used herb in TCM, it is also very popular in the West too. In the past, Chinese Licorice Root was used by the Egyptians as a flavoring for a drink called Mai-sus, and large quantities were found in King Tut’s 3000 year-old tomb for his trip into the afterlife. In fact, European tradition believes that Chinese Licorice Root is so nutritious and thirst-quenching that having a small piece under one’s tongue can keep one alive for 10 to 12 days. The ancient Hindus also made a tonic-milk using Chinese Licorice Root as they believe this drink can increase vitality.

In TCM, Chinese Licorice Root falls under the category of ‘Tonic Herbs for Qi Deficiency’. It can help to replenish one’s ‘Four Treasures’ (qi, blood, yin, yang). Neutral in nature and sweet in taste, this herb can slow down acute reactions, detoxify the body and has a tonic effect on the body by replenishing qi and blood. In particular, Chinese Licorice Root targets the Heart, the Lung and the Spleen.

Chinese Licorice Root can also be used to treat digestive disorders, muscular spasms caused by Blood Deficiency, promote the healing of pus-forming infections or inflammatory conditions, and to detoxify the body by clearing Heat and dispelling toxicity.

Other than the above Chinese Licorice Root benefits, the herb is also often used to modulate undesirable harshness or toxic properties in the remedies. For example, the herb is added in purgative remedies to reduce the adverse effects of rhubarb and sodium sulfate, such as abdominal pain. It often acts as a buffer to harmonize different ingredients in a remedy, and may also be a sweetener to make the decoction more pleasant-tasting.

Chinese Licorice Root is also an important ingredient in the treatment of palpitation, abnormal heart beating and hysteria.

Modern studies also suggest that Chinese Licorice Root is rich in antioxidant, anti-inflammatory, antimicrobial and anti-cancer properties. This herb may be able to relieve skin conditions such as acne and eczema. This is why Licorice Root is often used in topical gels.

Chinese Licorice Root may be able to relieve symptoms of indigestion such as acid reflux, gastroesophageal reflux disease (GERD), upset stomach and heartburn. The herb may also help to treat peptic ulcers caused by inflammation.

Chinese Licorice Root is also used to ease upper respiratory conditions such as asthma. This herb can also protect against bacteria that may lead to cavities.

How to Use Chinese Licorice Root

For ulcers of the mouth, stomach and digestive tract, most practitioners recommend deglycyrrhizinated Chinese Licorice Root, at the usual dosage of one 200-300mg tablet three times per day before meals and before going to bed.

Dried Licorice Slices can also be used in decoctions and tinctures. You can also try chewing them for a mouthful of flavor.

Cautions and Side Effects of Chinese Licorice Root

Prolonged use of Chinese Licorice Root of six weeks or more with excessive doses of more than 50g per day may cause pseudoaldosteronism and increase one’s blood pressure.

Licorice root has been shown to interact with several medications, including:

People taking any of these medications should avoid Licorice root products unless their healthcare provider instructs otherwise.

Here is a summary for Chinese Licorice Root: