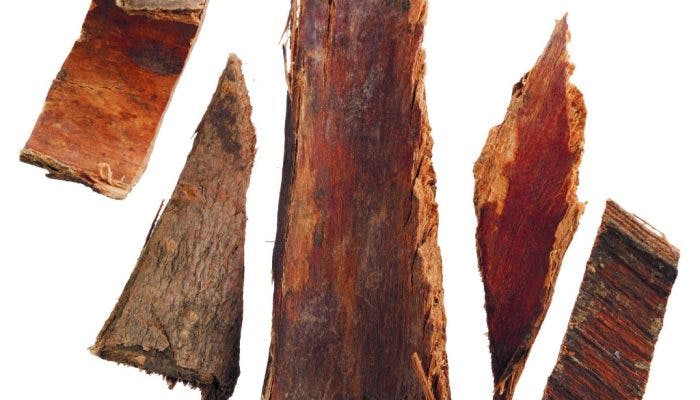 Ash Bark (qin pi, 秦皮), also known as Cortex Fraxini, comes from the Ash Tree, a plant that has a long history associating it with magic, spirits, superstitions and medicinal healing. Dioscorides, “the father of pharmacognosy”, said that “the leaves of the tree are so great they can be used against serpents.” The Ash Tree is also connected to many other old superstitions. For example, it has been said to cure warts and other ailments brought on by witches and evil spirits. An ancient Greek tale even said that humans were formed by Ash and Oak trees.

An exceedingly valuable timber tree, many early baseball bats were made of Ash, as are a considerable number of today’s hockey sticks, oars, tennis rackets and the handles of shovels, rakes and other gardening tools. Ash trees tend to attract lightning, so it is wise to not stand under one when it rains.

In China, Ash Trees are grown in the Jilin, Liaoning and Henan provinces. The bark is typically stripped from the tree in spring and autumn, dried under the sun and used raw for medicinal purposes. In fact, Qin Pi has been used in Traditional Chinese Medicine (TCM) for over 2000 years, and was recorded in China’s earliest medicinal records – the Divine Farmer’s Materia Medica.

In TCM, Qin Pi falls under the category of ‘Herbs that clear Heat and dry Dampness’. Cold in nature, this herb can help individuals who have too much Heat in their body, such as those experiencing a Yang Excess or a Yin Deficiency, to restore a harmonious yin-yang balance. Bitter in taste, Qin Pi can cleanse the body by clearing Heat, drying Dampness and promoting elimination via urination or bowel movements. In particular, Qin Pi targets the gallbladder, the stomach, the large intestine and the Liver.

Qin Pi can clear Heat, dry Dampness and remove toxicity. It can be used to clear inflammatory and infectious conditions, referred to as Internal Heat in TCM. As this herb is relatively mild in nature, it is usually used as an assistant herb for other herbs that are more effective in clearing Heat, drying Dampness, removing toxicity and checking dysentery. For example, Qin Pi is used in herbal formulas to check dysentery with difficulty in emptying bowels, purulent and bloody stools, diarrhea, ulcerative colitis and tenesmus. When it comes to treating leukorrhagia caused by Damp-Heat, Qin Pi is often combined with other Dampness-dispelling and leukorrhagia-relieving herbs too. Qin Pi is also used to treat metrorrhagia and leucorrhea with reddish discharge.

As Qin Pi can clear Heat in the Liver, it is also used to treat eye diseases caused by Liver Heat. The herb is either consumed or applied externally to treat symptoms such as cataract, bloodshot eyes with pain and nebula. When consumed, Qin Pi is frequently combined with other vision-improving herbs, such as Schizonepeta (荆芥, jing jie), Fructus Gardeniae (栀子, zhi zi) and Red Peony Root (赤芍, chi shao). When made into a decoction, the herb can also be used as eye drops or to wash eyes.

In addition, Qin Pi can clear Heat in the Lung to relieve dyspnea. The herb may also be used to treat asthma, cough and wheezing with profuse sputum caused by Lung-Heat, as well as red, swollen or painful joints.

How to Use Ash Bark (Qin Pi)

The recommended daily dosage of Qin Pi is 6 – 12g, ground into powder and mixed with water to make a decoction. Larger amounts of Qin Pi can be used when the herb is used as an eyewash or applied topically.

Whole, raw slices of Qin Pi can be found at some Asian markets. Qin Pi is also available in supplement forms such as powder, pills and decoctions.

Cautions and Side Effects of Ash Bark (Qin Pi)

Qin Pi should not be used by individuals who are experiencing excess Cold in their stomach or Spleen. Also, Qin Pi should not be taken together with medications containing vitamin B1 or Evodia Fruit (吳茱萸, wu zhu yu). Pregnant or breastfeeding women should avoid consuming this herb for the time being for safety concerns as well.

Here is a summary for Ash Bark (Qin Pi):