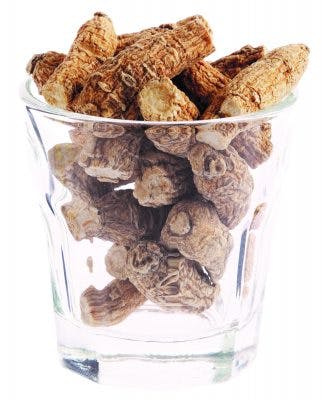 What is American Ginseng?

American Ginseng (xi yang shen, 西洋参), also known by its Latin name Panax quinquefolius, is a slow-growing medicinal plant that produces flesh, white root. This plant has compound leaves with a long stem and five leaflets. Its main roots are either round or spindle-shaped, with a light yellow or yellowish white colour. Not only has this herb been used by native Americans for thousands of years, but it has also been exported to Asia for Traditional Chinese Medicine (TCM) usage.

American Ginseng should not be confused with Asian Ginseng and Korean Ginseng. As compared to the latter two that are known to be more stimulating, American Ginseng is used to promote calm, focused energy while improving stress response and overall brain functions. However, one thing that all three types of Ginseng have in common is that they contain the same ginsenoside and gintonin compounds, just in different concentrations.

In TCM, American Ginseng falls under the category of ‘Tonic herbs for Qi Deficiency’. This herb is used for patterns of Deficiency, where it can help to replenish one’s four treasures (qi, blood, yin, yang). Cool in nature, American Ginseng can help people who have too much ‘Heat’ in their body to restore their yin-yang balance, such as those who are experiencing a Yang excess and Yin Deficiency.

Bitter and sweet, American Ginseng tends to have a cleansing action on the body by clearing Heat, drying Dampness and promoting elimination via urination or bowel movements. It can also help to slow down acute reactions and detoxify the body. This herb also has a tonic effect on the human body as it replenishes qi and blood. In particular, American Ginseng targets the Stomach, the Heart, the Kidney and the Lung.

Functions and Benefits of American Ginseng

Other than bringing relief to the above symptoms, American Ginseng is also a great health booster. Many athletes use it to improve their athletic performance and mental performance. It also serves as an anti-ageing aid.

How to Use American Ginseng

The recommended daily dosage of American Ginseng is 1-2g for fresh root, 0.6-2g for dried root, and 200-600mg for liquid extract. Patients who are consuming American Ginseng to improve their mental and physical performance should consume the herb in cycles of 15-20 days, followed by a two-week break.

Cautions and Side Effects of American Ginseng

When used at the recommended daily dosage, American Ginseng is considered safe for consumption. However, individuals who have symptoms of a Cold-Damp stomach should avoid consuming American Ginseng.

Also, American Ginseng does have some risks for patients with hypertension. This herb may increase the effects of caffeine, antipsychotics, blood pressure drugs and steroidal medications.

Certain groups of people should be cautious about consuming American Ginseng too. It is advised that pregnant and breastfeeding women should avoid consuming the herb, and individuals with hormone-sensitive conditions such as breast cancer, ovarian cancer and endometriosis should refrain from consuming the herb too. This is because American Ginseng contains chemicals called ginsenosides, which act like estrogen. Hence, if you are experiencing any conditions that might be made worse by exposure to estrogen, it is best to avoid this herb.

Here is a summary for American Ginseng: