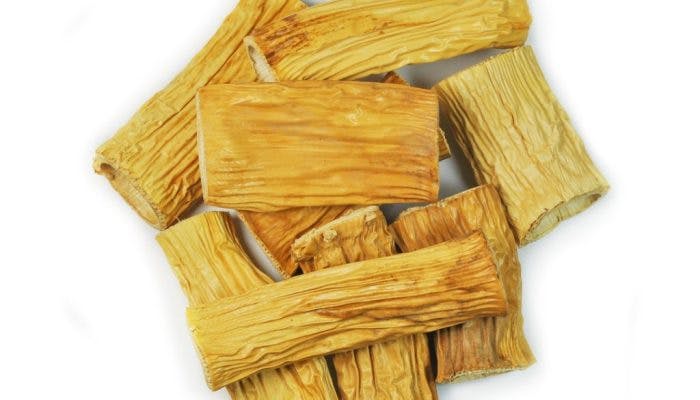 What is Reed Rhizome (Lu Gen)?

Reed Rhizome (lu gen, 芦根) is the root of Reed grass (Phragmites Communis), a plant that can reach a height of between five to 15 feet. This plant has feather-Iike flowers and thin, stiff, hollow stems. Its rhizomes are usually dug out at the end of spring or in the fall to have its fibrous roots removed, its skin peeled off, and dried under the Sun before being used in medicinal preparations.

In Traditional Chinese Medicine (TCM), Lu Gen falls under the category of ‘Herbs that clear Heat, purge Fire or clear Summer Heat’. Such herbs are used to address inflammatory and infectious conditions that are referred to as ‘Internal Heat’ in TCM. Most herbs in this category contain both anti-bacterial and anti-viral properties.

Cold in nature, Reed Rhizome can help people who have too much Heat in their body, such as those experiencing a Yang Excess or a Yin Deficiency, to restore a harmonious yin-yang balance. Sweet in taste, the herb can slow down acute reactions, detoxify the body, and has a tonic effect on the body by replenishing qi and blood. In particular, the herb targets the Lungs and the stomach.

Reed Rhizome can clear Heat in the qi system to dispel Heat pathogens manifested as high fever, sweat, irritable thirst and restlessness. Lu Gen is also indicated for polydipsia caused by Stomach Heat, and for vomiting caused by the adverse rising of Stomach Heat. The herb can help to address such symptoms, clear and purge Stomach Heat, promote the generation of fluids to quench thirst, and arrest vomiting.

As its actions are relatively mild, this herb is often used as an assistant herb. To treat thirst with irritability, Lu Gen is commonly used together with yin-nourishing herbs and fluid–generating herbs. For vomiting and nausea caused by Stomach Heat, Reed Rhizome can be used alone in the form of a thick decoction that is consumed on a frequent basis. However, a better effect can be achieved by combining it with other Heat-clearing and vomiting-arresting herbs.

Lu Gen can also dispel sputum and drain pus to clear Lung Heat. You can combine Reed Rhizome with other Heat-clearing herbs and phlegm-resolving herbs to address cough with sticky, yellow sputum caused by Lung Heat or phlegm Heat.

In addition, Reed Rhizome has slight actions of inducing diuresis, and it can be indicated for Damp-Heat stranguria or Damp-Heat edema with dark urine. It is usually combined with other stranguria-relieving diuretics or edema-alleviating diuretics to enhance its functions.

Lu Gen is also believed to have the ability to encourage rashes to the surface, and is thus indicated for febrile diseases with rashes that are expressed incompletely. Some individuals use Lu Gen in tea to address digestion problems, diabetes, leukemia and breast cancer. Some people also apply the herb directly on the skin to treat insect bites.

How to Use Reed Rhizome (Lu Gen)

The recommended daily dosage of Lu Gen is 15 – 30g, when boiled in water to make a decoction. Alternatively, you can take 30 – 60g of fresh Reed Rhizome directly, or smash it to consume its juice. The herb is also available in supplement form such as Phragmites Communis Extract.

The herb is more potent when it is fresh, as compared to its dried form.

Cautions and Side Effects of Reed Rhizome (Lu Gen)

Lu Gen should not be used by individuals who are experiencing weakness or Deficiency in the Spleen or stomach caused by Cold.

Here is a summary for Reed Rhizome (Lu Gen):