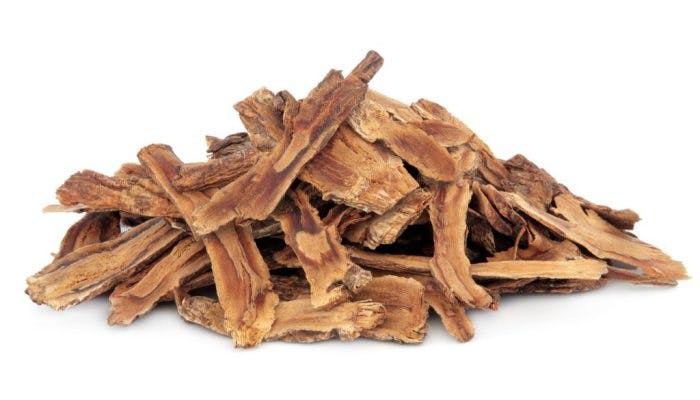 Largeleaf Gentian Root (qin jiao, 秦艽), also known as Gentiana Macrophylla or Radix Gentianae Macrophyllae, is recognised as one of the best herbs to relieve joint pain caused by weather changes. The herb comes from the large Gentiana genus of plants, which include more than 400 species that typically grow in the mountain climates of Europe, Asia and the Americas. Such plants have flowers that resemble trumpets, and they come in a variety of colours, including blue and yellow.

The name of the herb came from the ancient Illyrian King Gentius, who discovered that the herb can be used as a tonic. It is said that during his reign, Illyria was devastated by the plague. King Gentius prayed that if he shot an arrow, the gods would direct him to a herb that has enough virtue to arrest the spreading disease. The King shot the arrow, and it fell on the root of a plant which was found to possess the most astonishing curative powers. The herb then came to be known as the Gentian, in honour of the good King.

For centuries, the root of Gentian has been used for medicinal purposes. It is also a component of some alcoholic drinks and digestifs to stimulate appetite and aid digestion. Gentian is also the key ingredient in a soft drink called Moxie, which once outsold Coca Cola and was touted as the ultimate nerve food.

In Traditional Chinese Medicine (TCM), Largeleaf Gentian Root falls under the category of ‘Herbs that dispel Wind and Dampness’. Such herbs help to treat painful obstruction, manifested as symptoms such as arthritic and rheumatic conditions with pain, stiffness and numbness in bones, joints and muscles.

Cool in nature, Largeleaf Gentian Root can help people who have too much Heat in their body, such as those experiencing a Yang Excess or a Yin Deficiency, to restore a harmonious yin-yang balance. Bitter and pungent in taste, the herb can cleanse the body by clearing Heat, drying Dampness and promoting elimination via urination or bowel movements. The herb can also promote the circulations of qi and body fluids. In particular, Largeleaf Gentian Root targets the gallbladder, the stomach and the Liver.

Largeleaf Gentian Root can dispel Wind-Dampness to unblock collaterals and alleviate arthralgia syndromes caused by Wind and Dampness, spasms of tendons and vessels, aching pain of sclerometre, as well as chronic pain and cramping. The herb is especially useful in treating heat arthralgia manifested as redness, swelling and burning, painful sensation in the joints.

As the herb can soothe tendons and collaterals, Largeleaf Gentian Root can also be used to treat Wind-Stroke manifested as hemiplegia, wry of eye and mouth, spasm of the four extremities and aphasia with stiff tongue. Largeleaf Gentian Root can be combined with other qi-replenishing, blood–nourishing and Stasis-resolving herbs to enhance its effectiveness in treating the above symptoms.

Largeleaf Gentian Root is commonly used to treat tidal fever caused by Yin Deficiency as it can clear Damp-Heat. Its effects can be enhanced by being combined with other yin-nourishing herbs. In addition, the herb can purge Fire, which makes it a great herb to alleviate jaundice by clearing Damp-Heat from the Liver and the gallbladder, as well as other Liver-Fire symptoms such as shingles. Largeleaf Gentian Root can also lubricate the intestines to promote bowel movements and treat constipation.

Scientific research today has suggested that Largeleaf Gentian Root may possess anti-inflammatory properties to treat inflammatory conditions, such as rheumatoid arthritis and speed up healing time. However, such studies have only been conducted on animals, and no studies have tested this effect in humans yet. Also, most studies have used extracted gentiopicroside from Gentiana plants, thus it is unclear if consuming the root in its unprocessed form has the same effects. Some research suggests that gentiopicroside is not found in raw forms and only exists in dried Gentian Root.

Other than the above Largeleaf Gentian Root benefits, researchers also suggested that the anti-inflammatory effects of Largeleaf Gentian Root may be able to relieve symptoms of sinus infections, such as congestion, headaches, upper respiratory tract infections and facial pain resulting from the inflammation of the sinuses. A controlled study has shown that the herb can improve nasal congestion, nasal discharge and post-natal drip.

The iridoids and secoiridoids in Largeleaf Gentian Root may help to increase appetite and protect the digestive system too. These components are also what contribute to the bitter taste of the herb. Consuming bitter substances may help to stimulate the body to secrete saliva and gastric juices, which then promotes appetite and digestion. In addition, the herb can treat upset stomach, nausea and gas. However, the stimulation may cause certain digestive issues too, such as acid reflux and ulcers.

Largeleaf Gentian Root can stimulate the production of bile, which prevents a sluggish liver by preventing the accumulation of waste and speeding up the digestion of proteins and fats. This may allay the sense of fatigue that can be felt after consuming a heavy meal.

How to Use Largeleaf Gentian Root (Qin Jiao)

People have also used plasters made from Largeleaf Gentian Root and vinegar on skin inflammation, infected wounds and bites from poisonous animals.

Cautions and Side Effects of Largeleaf Gentian Root (Qin Jiao)

Largeleaf Gentian Root should not be used by individuals who are experiencing conditions of frequent urination, chronic pain with emaciation, diarrhea caused by Spleen Deficiency, and Cold in the Spleen and stomach.

Use the herb with caution when operating heavy machinery as this herb may cause sedation, drowsiness, nausea and vomiting.