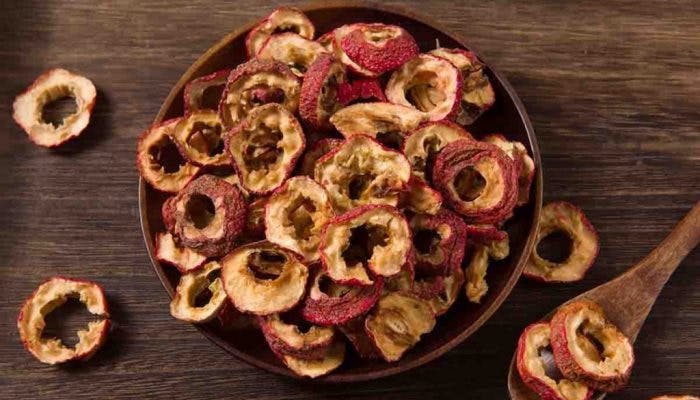 What is Hawthorn Fruit (Hawthorn Berry)?

Hawthorn Fruit (shan zha, 山楂), also known as Hawthorn Berry, Chinese Hawthorn or Hawfruit, are tiny berries that grow on trees and shrubs belonging to the Crataegus genus. Ranging from yellow to dark red in colour, these berries are rich in nutrients, and have a tart, tangy taste with mild sweetness.

Compendium of Materia Medica, the 16th century Chinese medicinal encyclopedia, recorded the following incident: There was a child who often suffered from indigestion. His face always had a yellow hue, and his stomach would bloat like a drum after eating. One day, when the child brought his sheep out to graze, he went to rest under a Hawthorn tree and ate some Hawthorn berries. Afterwards, he realised that his digestive problems were cured.

Since the Song Dynasty, Hawthorn Fruits are also candied to make a traditional Chinese street snack, especially during the period of Chinese New Year. After being pan-fried, the Hawthorn Fruits are coated in melted rock sugar, and then threaded on skewers to allow the sugar to harden into a clear, golden casing. Such skewers are also named “Candy Gourds” (bing tang hu lu, 冰糖葫芦). It was said that the favourite concubine of Emperor Song Guangzong once experienced a very severe appetite loss till her face grew sunken and yellow. The imperial doctors tried all they could, but nothing worked, and she grew sicker by the day. However, after eating some Candy Gourds before every meal over 15 days, the concubine recovered and her beauty was restored.

Hawthorn Berry is thought to target the Heart, Liver, Spleen and Stomach. Falling under the TCM category of “Herbs that relieve Food Stagnation”, Hawthorn Berry possesses digestive properties to help with food digestion. ‘Warm’ in nature, Hawthorn Berry can help people who have too much ‘Cold’ in their body. Hence, these berries can help those who have a Yin Excess or a Yang Deficiency. Sour and sweet in taste, Hawthorn Berry can help to restrain abnormal charges of Fluids from the body, such as diarrhea or heavy sweating, and slow down acute reactions to detoxify the body. These berries also have a tonic effect as they replenish qi and blood.

Hawthorn Berry can improve digestion and reduce Food Stagnation. These berries contain properties that reduce constipation and act as a prebiotic. It is especially effective in improving the digestion of red meat, fatty foods, oily and greasy food. It can also treat indigestion with abdominal distention, pain and diarrhea. Apart from being high in dietary fiber, they also possess prebiotic properties that aid digestion by nourishing the good bacteria in our intestines to improve our overall gut health.

Hawthorn Berry can invigorate the Blood and break Stasis. By dispersing Blood Stagnation and dissipating clumps, it can also aid in inducing labour, treat post-partum or amenorrhea abdominal pain and spotting. These berries are also often used for hernia and bulging disorders.

Other than the above Hawthorn benefits, modern studies have also found that Hawthorn Fruit is an excellent natural source of antioxidants and anti-inflammatory properties. It is thus associated with lower risks of certain cancers, anti-aging effects, the prevention of diabetes and other diseases including asthma and allergies.

How to Use Hawthorn Fruit (Hawthorn Berry)

Hawthorn Berry can be consumed in many forms. You can eat it directly, add it into your diet, or consume it in the form of supplements, enzyme powder drink or capsules.

For example, Hawthorn Berry has been used to make Hawthorn Vinegar and Hawthorn Berry Extract for individuals to add to their diet and enjoy its health benefits. It can also be combined with other herbs to make herbal tea.

The recommended serving size for Hawthorn Berry is 9-15g. If you would like to make tea with it, you can steep it in hot water for 10 – 15 minutes, add brown sugar to balance flavor, and add ingredients such as dried orange peel, jujube dates and goji to replenish qi and blood.

Cautions and Side Effects of Hawthorn Fruit (Hawthorn Berry)

The most frequent side effects experienced by individuals who consumed Hawthorn Berry include sweating, headaches, sleepiness, palpitations, mild rash, agitation and gastrointestinal effects. While these Hawthorn Berry side effects are not severe, we still strongly recommend you to speak to your healthcare provider immediately if you experience any of the above symptoms after consuming Hawthorn Fruit.

From the perspective of TCM, individuals with Spleen and Stomach Deficiency should avoid consuming Hawthorn Fruit. These berries lack Spleen-tonifying properties, hence they can only serve as a temporary symptomatic treatment. Too much or prolonged consumption of Hawthorn Fruit can further weaken the Spleen, which propagates a vicious cycle and causes further damage to the consumer’s health.

Also, Hawthorn Berry should not be taken with an empty stomach, As these berries are acidic, eating them on an empty stomach can damage the stomach lining and worsen gastric ulcers in the long run. Thus, we strongly encourage you to consume Hawthorn Fruit only after meals.

Due to the potent qi and blood-circulatory effects of Hawthorn Berry, it is also advised that pregnant women should avoid consuming these berries as they may potentially cause a miscarriage. The same applies to women with abnormally heavy or prolonged menstruation.

Here is a summary for Hawthorn Fruit (Hawthorn Berry):