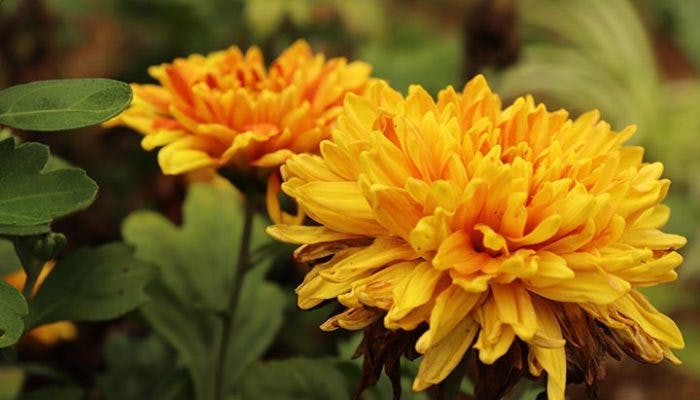 What is Chrysanthemum Flower?

Chrysanthemum Flower (ju hua, 菊花) is a flowering plant that is native to China and Japan, and it grows worldwide today. It is believed that Chrysanthemum Flower was first cultivated in the 15th century BC, where it was appreciated by poets and artists as a symbol of nobility and integrity.

In 8th Century AD, the flower was then brought over to Japan, where it was adopted as the Emperor’s official seal and the symbol of the imperial throne. However, in European cultures, It became associated with death because of its common use as a gravesite decoration.

Chrysanthemum Flower was first brewed into herbal tea and became popularized during the Song Dynasty (960 AD – 1279 AD). Today, Chrysanthemum tea is still consumed by millions of people in China, Korea, Singapore, and Japan every day. It is a favorite Summer drink, loved for its cooling effect on the body as well as its traditional health benefits.

In Traditional Chinese Medicine (TCM), Chrysanthemum Flower falls under the category of ‘Cool/Acrid herbs that release the Exterior’. Cool in nature, this herb can help people who have too much Heat in their body, such as those experiencing a Yang Excess or a Yin Deficiency, to restore a healthy yin-yang balance.

Bitter and sweet, Chrysanthemum Flower has a cleansing action on the body by clearing Heat, drying Dampness and promoting elimination via urination or bowel movements. It also helps to slow down acute reactions and detoxify the body. It also has a tonic effect because they replenish qi and blood. In particular, Chrysanthemum Flower targets the Liver and the Lungs.

Functions and Benefits of Chrysanthemum Flower

Traditional Chinese Medicine (TCM) shows that there are many benefits of Chrysanthemum Flower:

Chrysanthemum Flower can disperse Wind and clear Heat from the body. It can help to relieve headache, fever, and treat early stages of diseases that affect the upper respiratory tract, eyes, ears, nose, throat or skin. Some examples of such diseases include heat rashes and sinusitis.

TCM believes that external diseases such as colds or allergies can only invade the body if the external environment overwhelms our wei qi (卫气, the immune system). In order to counteract this invasion, Cool/Acrid herbs aim to induce sweating by dilating our capillary pores so that they release more sweat. The belief is that this will expel the disease from the body and stop it from invading further.

Also, Chrysanthemum Flower can clear Wind-Heat in the Liver, the Kidney and the eyes due to Yin Deficiency. This herb can help to relieve symptoms such as red eyes, painful eyes, dry eyes, excessive tearing, blurry vision and dizziness.

TCM has also used Chrysanthemum Flower to treat chest pain, high blood pressure, diabetes and prevent heart diseases such as stroke because of its ability to promote the movement of blood.

Modern studies have suggested that Chrysanthemum Flower may help to manage anxiety and anxiety-related symptoms such as irritability. Also, this herb contains anti-inflammatory properties which can boost one’s immune system and fight signs of ageing.

How to Use Chrysanthemum Flower

Dried Chrysanthemum Flowers can be found at many Asian markets, some herbal shops and some flower stores. Other than making tea, Chrysanthemum Flower can also be used in dishes. For example, it can be used to add flavour to vinegar or soya sauce, as a topping on salad with tofu, or prepared as tempura that is dried, pickled or added to soups.

Cautions and Side Effects of Chrysanthemum Flower

Individuals with Qi Deficiency, diarrhoea or no appetite should avoid Chrysanthemum Flower. Also, people who are allergic to ragweed may experience allergic reactions to this herb. Some examples of such allergic reactions include skin irritation, itchiness, rashes and redness.

In addition, while there are plenty of benefits of Chrysanthemum Flower Tea, it is important to note that it should not be consumed on a daily basis.

Here is a summary for Chrysanthemum Flower: