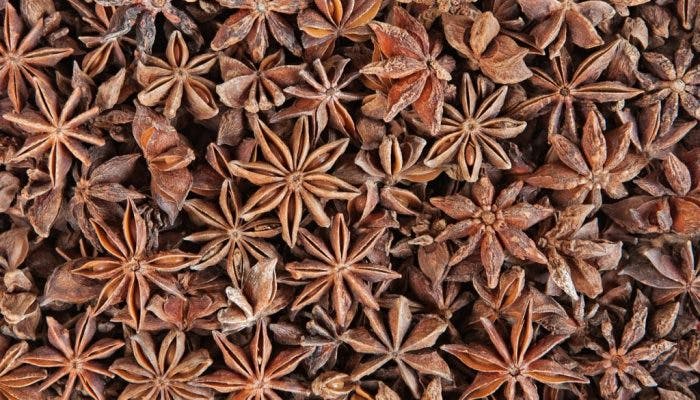 What is Chinese Star Anise?

Chinese Star Anise (ba jiao hui xiang, 八角茴香) are aromatic fruit pods from the evergreen Star Anise Plants (Illicium Verum), which are native to China and Vietnam. With its distinctive star shape, pungent aroma and a sweet taste that resembles cinnamon or licorice, Chinese Star Anise is becoming one of the most popular spices around the world.

Pungent in taste, Chinese Star Anise tends to promote the circulations of qi and body fluids. In particular, it targets the Kidney, the Liver, the Spleen and the stomach.

Chinese Star Anise can warm yang to dissipate Cold, regulate the flow of qi to increase appetite and relieve pain such as joint pain, abdominal pain due to Cold, menstrual and stomach cramping, as well as to ease vomiting and nausea. The herb is also efficient in boosting one’s libido and reducing one’s stress levels.

Modern studies have also discovered that one of the strongest Chinese Star Anise benefits is its ability to boost immunity and fight infections. That is because it contains shikimic acid, an active ingredient of influenza medication, and it possesses antiviral, antifungal and antibacterial properties. This means that this herb may be able to combat drug-resistant bacteria and treat common yeast infections.

Chinese Star Anise can also improve skin health by promoting the elimination of free radicals throughout the body with a high level of various oxidants. It can prevent oxidative stress, minimize the appearance of wrinkles, boost skin elasticity and reduce blemishes.

How to Use Chinese Star Anise

Chinese Star Anise can be used in a number of ways, either in the ground or the whole form, but the most popular way to use it is to mix it in other spice mixes, such as the “five-spice” powder that is a popular blend in many cultures.

On its own, Chinese Star Anise is also used in cooking, baking, marinating or steeped into teas and elixirs. One example of such tea is Chai Star Anise Tea. In the West, the spice has also been used to complement baked items, jams, and syrups, and also certain alcoholic drinks, such as absinthe and ouzo. Other examples of dishes that Chinese Star Anise is frequently added to are stews, sauces, marinades, soups or braised dishes.

When using the pods, it’s a good idea to add them toward the end of cooking because they are strong in flavor. Also, since they are not edible, you should remove them when the dish is ready to serve. The ground spice is used like other powdered spices, but it’s still strong, so start with a small amount and experiment with the flavor to suit your taste.

Cautions and Side Effects of Chinese Star Anise

Quite a number of individuals have varying levels of allergic sensitivity to Chinese Star Anise. Some may experience mild itching or rash whereas some may suffer from mild to severe gastrointestinal distress and inflammation.

It is important to note that excessive use of Chinese Star Anise may also lead to interactions or complications with drugs used for cancer or hormonal regulation.

In addition, as Chinese Star Anise contains active ingredients that have an effect on hormones, especially estrogen levels, it is best to avoid this herb if you are struggling with a hormonal disorder.

If you have any prescribed medications or are unsure about your allergies, it is best to speak with your healthcare provider before adding Chinese Star Anise to your health regimen.

Here is a summary for Chinese Star Anise: