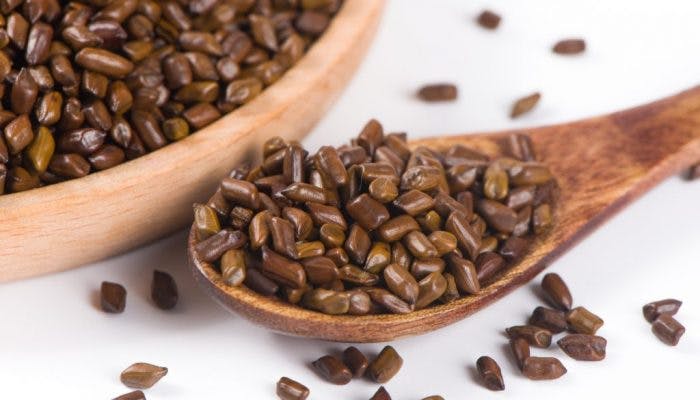 What is Cassia Seed?

Cassia Seed (jue ming zi, 决明子), also known as Semen Cassiae, comes from the Cassia, an upright-growing plant that can reach a height of more than four feet. The Cassia grows in tropical zones, and grows large green leaves and yellow flowers. Cassia Seeds are the seeds of this plant, and they can range from greenish-brown to dark brown in colour. Usually, Cassia Seeds are collected in Autumn when the fruits are ripe, then the seeds will be cleansed before being dried under the Sun. These dried seeds can then be used raw or fried.

There was a legend that there was once an old Taoist priest who had clear eyes and sharp ears even though he was already more than 100 years old. Many people sought after his secret to achieve such longevity and health. To their surprise, the old Taoist priest said that he had no secret to it, but he ate Cassia Seeds every day. Hence, Cassia Seed is often used to soothe one’s eyes in Traditional Chinese Medicine (TCM).

In TCM, Cassia Seed falls under the category of ‘Herbs that clear Liver Heat and brighten the eyes’. This herb can clear inflammatory and infectious conditions that are referred to as ‘Internal Heat’ in TCM, which are often caused by a Deficiency of Yin or an Excess of Yang.

Cool in nature, Cassia Seed can help people who have too much Heat in their body to restore a healthy yin-yang balance. Bitter and sweet in taste, this herb has a cleansing action on the body by clearing Heat, drying Dampness and promoting elimination via urination or bowel movements. It also slows down acute reactions, detoxifies the body, and has a tonic effect on the body by replenishing qi and blood. In particular, Cassia Seed targets the large intestine and the Liver.

Functions and Benefits of Cassia Seed

Cassia Seed can help to purge Wind-Heat in the Liver and improve vision by tackling syndromes of eye diseases caused by Liver Fire, Wind-Heat or Liver deficiency. Some examples of such eye diseases include red and itchy eyes, pink eye, blood-shot painful eyes, sensitivity to light, blurred vision and excessive lacrimation.

Other than the above Cassia Seed benefits, modern research also suggests that Cassia Seed can help to lower blood pressure and alleviate the swelling, discomfort and pain in the muscles and tissues by promoting blood circulation. It can also help you achieve your ideal body weight by expelling toxins and eliminating water retention, and promote digestion by improving gastric secretions in the body.

Cassia Seed can also inhibit the growth of microorganisms such as fungi which can cause severe skin infections. It is thus very useful for bacterial infections. This herb also helps to maintain cholesterol levels and suppress the development of atherosclerotic plaque. Cassia Seeds are also known to have potent antimicrobial and antiviral properties that make them a natural treatment for cold and flu.

Individuals who are suffering from sleep issues such as insomnia and sleep apnea can also use Cassia Seed to promote sleep.

How to Use Cassia Seed

The recommended daily dosage of Cassia Seeds is 6 – 12g if decocted in water for oral consumption. However, if used to treat constipation, Cassia Seeds should not be consumed for long periods.

Whole, dried Cassia Seeds can be found at some Asian markets and specialty stores. Some stores also sell Cassia Seed powder, Cassia Seed extract and Cassia Seed decoctions. Some healthcare practitioners also make Cassia Seed paste, which can be applied to the skin and treat parasitic disorders such as ringworm.

Some individuals add Cassia Seeds to their pillows to promote better sleep quality as well.

Cautions and Side Effects of Cassia Seed

As mentioned above, individuals should also refrain from consuming Cassia Seed for the long-term, especially if one is experiencing constipation. Long-term consumption of this herb may also lead to irregular menstruation. Also, Cassia Seed should not be used in conjunction with Hemp Seed.

Here is a summary for Cassia Seed: