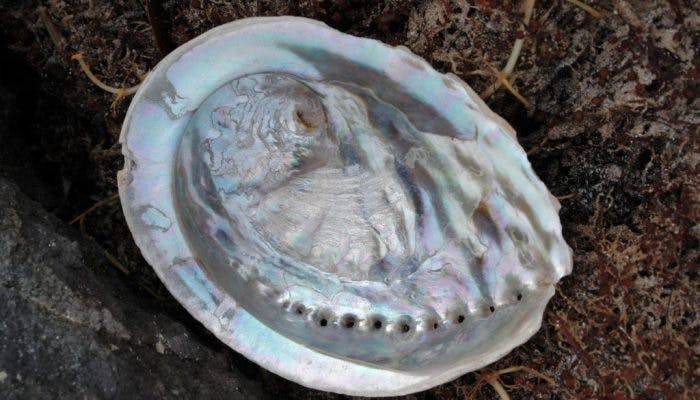 What is Abalone Shell?

Abalone Shell (shi jue ming, 石决明), as its name suggests, refers to the shell of the highly prized Abalone. This type of mollusk has been classified together with other valuable foods such as shark fin, ginseng and bird’s nest by the Chinese, and they are known to be some of the most desirable and expensive foods in Chinese culture. That is what makes Abalone one of Chinese New Year’s iconic dishes too.

Abalone feeds on seaweed, and is extremely difficult to prise from the rocks from which they cling on. Known by some as the ‘Sea Ear’, Abalone has a one-piece shell that is either round or oval in shape, with a dome on one end. These shells have a beautiful pearly inner coating.

While the meat of the Abalone is considered a delicacy, its shell is used in herbal remedies in Traditional Chinese Medicine (TCM). The Chinese name shi jue ming is derived from the shell’s ability to treat eye diseases (ming means bright).  The shells are collected in the Summer and Autumn, and later dried under the Sun before getting broken into pieces for use, either raw or after being calcined.

Abalone Shells have been found in archaeological sites around the world, ranging from 100,000-year-old deposits at Blombos Cave in South Africa to historic Chinese Abalone middens on California’s Northern Channel islands.

In TCM, Abalone Shell falls under the category of ‘Herbs that pacify Internal Liver Wind and stop Tremors’. It can be used to treat hyperactive Liver yang, and it has a powerful antispasmodic effect on the nervous system too. Cold in nature, Abalone Shell can help individuals who have too much Heat in their body, such as those experiencing a Yang Excess or a Yin Deficiency, to restore a healthy yin-yang balance.

Salty in taste, Abalone Shell has a draining effect on the body by clearing accumulations, removing Phlegm and softening hard lumps. In particular, Abalone Shell targets the Kidney, the Liver and the Lungs.

Functions and Benefits of Abalone Shell

Traditional Chinese Medicine (TCM) shows that the benefits of Abalone Shell include the following:

Abalone Shell can also be combined with Oyster Shell to help treat headaches caused by Yin Deficiency. Other than that, Abalone Shell healing properties also include antipyretic sedative, anti-hypertensive and antibiotic properties.

How to Use Abalone Shell

Cautions and Side Effects of Abalone Shell

It is also not recommended for individuals with weak gastrointestinal functions, those who lack appetite or are suffering from diarrheas.

Here is a summary for Abalone Shell: