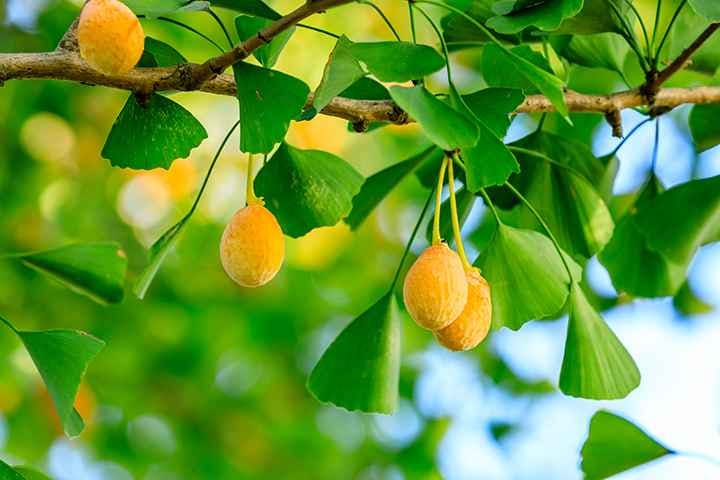 Have you heard about this powerful “memory” herb that comes from a tree with stinky fruits? The Ginkgo biloba tree is also known as the maidenhair tree. It has fascinated humans for a long time with its unique fan-shaped leaves and lustrous yellow foliage in autumn.

Native to China and one of Earth’s oldest living fossils, the Ginkgo biloba tree has remained the same for over 200 million years and is the last surviving species of its lineage. Its kernels and leaves have been used for hundreds of years as herbal medicine to prevent cognitive impairment, cardiovascular disease, and many other ailments.

The earliest reference to Ginkgo biloba was in poems written during the Song Dynasty in the 11th century, followed by more references in 13th and 14th century Chinese literature. The Ginkgo biloba tree subsequently found its way to other parts of Asia including Japan, thanks to a Dutch East India Company physician named Engelbert Kaempfe. He became fascinated by the tree and wrote about it in 1712.

The Chinese have been using Ginkgo biloba for many decades for culinary and medicinal purposes. In many Eastern cultures, it is considered a sacred tree. It has numerous health benefits, owing to two primary active compound groups: terpenoids and flavonoids. Today, both manufacturers in the East and West produce herbal supplements that use the standardised extracts of the plant.

An increasing number of meta-analytical and systemic reviews of smaller studies indicate that the herb has therapeutic action on neurodegenerative cognitive diseases, and cardiovascular diseases.

Research has demonstrated the herb can help prevent or treat ageing-related neurodegenerative conditions such as dementia and Alzheimer’s. It is able to increase blood flow to the brain, help brain cells utilise glucose and oxygen more efficiently.

In China, injections containing Ginkgo biloba extract are used to treat heart attacks. Animal studies have also shown that the herb extract has potent protective properties. It inhibits apoptosis (programmed cell death) of heart tissue cells, which is a precursor of heart failure. In addition, there is indication that the herb has a lot of potential in the treatment of strokes by improving blood plasma viscosity.

Research on Ginkgo biloba has also shown promising answers in the area of anti-cancer drug development. A 2019 study observed the actions of five active compounds within it against cancer cells. It found that two of them are particularly anti-proliferative.

Animal studies have shown that Ginkgo biloba extract can improve renal (kidney) function. It reduces damage to the tubular structures within the kidney due to diabetic complications. It is also well-known as a prevention and treatment of glaucoma.

Traditional Chinese Medicine (TCM) is no stranger to the medicinal powers of Ginkgo biloba. Roasted ginkgo seed kernel is a local delicacy in Eastern countries such as China, Korea, and Japan. In fact, paleobotanists who study the herb and its extinct relatives believe that its survival had something to do with the early consumption of its kernels by humans and other animals.

According to TCM physician Luke Yau Wai, this herb can present as sweet, bitter, and astringent in TCM terminology. It enters the Heart and Lung meridians.

“Ginkgo biloba helps in calming the nerves. It also eliminates Heat and is a diuretic, which helps promote fluid excretion from the body, removing Blood Stasis,” physician Luke states. It regulates qi by dredging collaterals, essentially clearing an obstruction from meridian pathways.

Other ailments that this herb can address include:

Of course, a balanced diet and regular exercise should be a first resort to maintaining good health. However, it is good to know we have nature’s gift to help us get to better health along the way.

How to Safely Use Ginkgo Biloba

Most Western preparations of Ginkgo biloba supplements come in tablet form, which is easier to administer orally. On the other hand, TCM preparations include Ginkgo biloba extract as part of an existing TCM liquid essence, such as chicken essence. Although Ginkgo biloba is available for purchase in health stores and online shopping platforms, we strongly caution you from self-medicating with this powerful herb. Consult your physician first before consuming it.

Owing to its potency, extracts of Ginkgo biloba interact with other commonly used medicines. These include blood thinners like aspirin and warfarin, and nonsteroidal anti-inflammatory drugs (NSAIDs) for pain and fever-like ibuprofen and naproxen.

Ginkgo biloba supplements can also interact with medication for blood disorders, antidepressants, and even other health supplements such as St. John’s wort, Panax ginseng, cedar leaf, folic acid, and melatonin.

“Patients with senile arteriosclerosis and fragile blood vessels should not consume it long term to avoid cerebral hemorrhage. It is advisable to consult a professional doctor or TCM physician before taking it. Individuals with low blood pressure should take it with caution,” cautions physician Luke.

A potent powerhouse plant with many great benefits, Ginkgo biloba remains a revered sacred tree in the spiritual practices of Eastern cultures. It adorns old temples, lines urban streets, and inspires poetry. While modern day sentiments may separate sacred knowledge from medical knowledge, it is not surprising that this herb holds the fancy of monks, poets, emperors, healers, scientists, and physicians alike. This living fossil is nature’s gift for the mind and body.

It's Taking the Pharmaceutical Industry by Storm, but Can Lianhua Qingwen Jiaonang Cure COVID-19?

There are many health and beauty benefits in drinking flower tea. If you never thought of using it in other ways, this article will show you how.

Atkins Diet: Is the Low-Carb Weight Loss Plan Good for You?

The Atkins Diet is one of the long-standing low-carbohydrate diets out there. If you’re planning to try it out for weight loss, be aware of the risks.

Love the King of Fruits? 6 Surprising Facts on Durian Nutrition

A durian’s nutrition profile is associated with many health benefits. However, people with certain conditions should consume the fruit with caution.