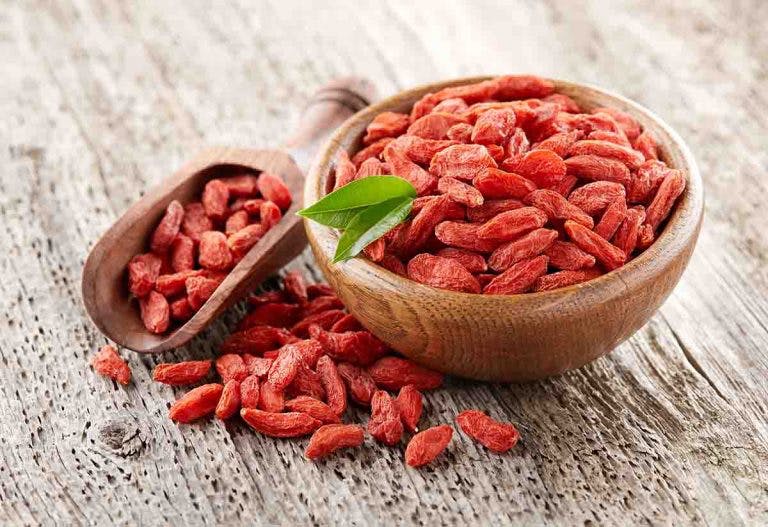 You’re probably familiar with strawberries, raspberries, and blueberries, but there’s another berry species that is also considered a superfood with many nutritional values. The red goji berry (harvested from the Lycium barbarum shrub) is native to China and synonymous with the Ningxia Hui Autonomous Region — famous for good quality goji berries. The plant grows in the form of a shrub and is also called the Chinese wolfberry.

Because of their many benefits, goji berries have been consumed in Asia for decades to treat common health problems such as high blood pressure, fever, diabetes, and deterioration of eyesight due to ageing. The berries can be eaten cooked, dried, or raw and can also be brewed in a herbal concoction alongside other herbs.

Goji berries aren’t just a staple of Traditional Chinese Medicine (TCM) but have an array of uses in Ayurvedic and Western treatments. Furthermore, TCM belief states that goji berries are sweet and neutral in nature, and can nourish the liver and kidney whilst enhancing a person’s jing (essence) and vision. With many nutrients and bioactive compounds found in these brightly coloured plants, here are some reasons why goji berries are hailed as superfruits.

The goji berry is widely believed to be good for the eyes. “Goji berries are a good source of vitamins and minerals. They are rich in vitamin A, which is vital for eye, bone, skin, and cell development,” says Eu Yan Sang’s TCM physician Lim Sock Ling. “The amount of beta-carotene in goji berries is among the highest of all edible plants. With the high level of zeaxanthin, goji berries can benefit the vision and may help in age-related eye diseases.”

These benefits are demonstrated in the findings of a 2011 study published in Optometry and Vision Science, where elderly subjects consumed a daily dietary supplement with goji berry for about three months showed an increase in plasma zeaxanthin – a compound beneficial for the eyes – and antioxidant levels in the macula, which is part of the retina. The same study also finds that the supplement may protect the eyes from soft drusen — debris accumulated into tiny pebbles that form over time.

Interestingly, a separate study also found that the consumption of goji berries can also help to prevent or delay vision deterioration in people with Retinitis Pigmentosa (RP) — rare genetic disorders that cause a break down and loss of retina cells. This relates directly to the antioxidative component of the berries, including arabinose, galactose, glucose, mannose, rhamnose and xylose. These polysaccharides also show the ability to protect retinal function and retinal ganglion cells after partial optic nerve section in animal models. Similarly, it can preserve retinal vasculature from retinal ischemia or reperfusion injury.

Clinical studies have also shown that consuming goji berries can protect against photoreceptor degeneration in animal models with RP.

Goji berry consumption can also help to lower cholesterol and fat levels. According to the Journal of Natural Remedies, the consumption of goji berry powdered extract yields a significant reduction in total cholesterol, triglycerides, and low-density lipoprotein-cholesterol levels.

A 2020 animal study published in the Turkish Journal of Biology showed that goji berries could reduce anxious behaviour. Further research can help to evaluate the potential to produce a herbal anti-anxiety medication in the future.

How to Add Goji Berries to Your Diet

The popularity of goji berries has led to their availability in various forms. Their pleasant, sweet taste makes them easy to consume too. For convenience, these berries are commonly available dry or in powder form. Moreover, they are available as supplements and juice blends. It’s worth noting, though, that the recommended consumption of goji berries is between 6 to 12 grams daily.

Goji berries are safe to consume raw. You can add them to your trail mixes, cereal, yoghurt, and salads — a handful a day is enough. Dried goji berries are also available in convenient packs, making them easier to consume when you’re out and about.

You can develop innovative recipes with this fibre-rich ingredient. Try making a goji berry cheesecake or muffin! You can also add them to savoury food like soups and steamed dishes.

You can add goji berries to your juices and smoothies. Just mix them together in your blender with other ingredients such as bananas, apples, or almond milk. In addition, you can steep dried goji berries in hot water to make goji berry tea. You can even improvise by adding a teaspoon of honey and a few slices of ginger to your liking.

Goji berry supplements or extracts are available in the market for people to take on the go for ease of consumption. People around the world know it as tonic for enhancing longevity.

Who Should Avoid Goji Berries

Individuals with underlying medical conditions should consult doctors or TCM physicians for professional advice regarding the consumption of goji berries.

Goji berries are generally safe to consume. Yet, people with existing food allergies should exercise caution because it might trigger allergies in rare cases.

“Studies have shown that individuals who are allergic to lipid transfer proteins may be allergic to goji berries,” physician Lim says. For this reason, those with food allergies should consult their doctor or a TCM physician before consuming the berries.

People on certain medications for high blood pressure or diabetes, as well as anti-coagulation therapy (warfarin), should consult their doctor or a TCM physician before taking goji berries.

Goji berries contain betaine, a compound that might be potentially harmful to foetal health. However, more research needs to be conducted to determine whether goji berries are safe to consume during pregnancy.

The benefits of consuming goji berries are plentiful. The berries are safe to consume for most of the population, so if you haven’t tried them yet, it’s about time you add them to your “things-to-try list” for the future!

How to Do Away with Eye Floaters and Achieve Clearer Vision

A person is likely to develop eye floaters after the age of 50. Conditions such as diabetes and body constitutional imbalances may increase the risk of the problem’s onset.