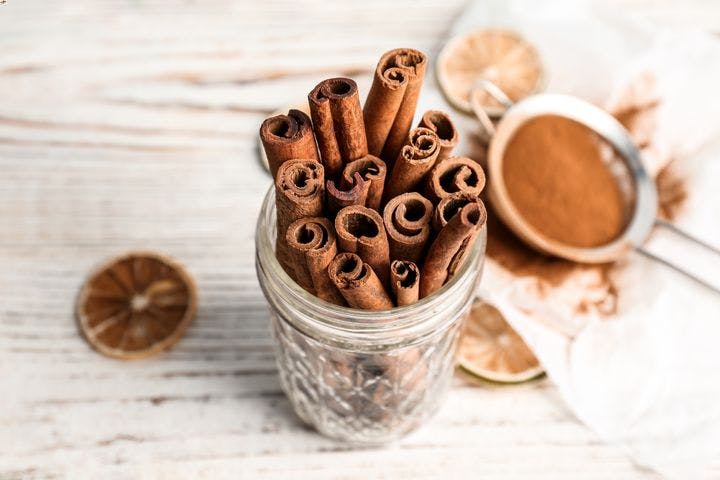 Cinnamon is usually associated with fragrant curries or sweet-spicy desserts. But did you know how it can also benefit your health and wellness? This spice that has been around since ancient times can help with many ailments such as diabetes, heart diseases, and other diseases that are inflicting more and more Malaysians today. Like many powerful spices, this tree bark contains many potent compounds that can promote overall great health. Read on to find out the seven cinnamon benefits.

An Ancient and Potent Spice

The bark of the cinnamon tree was one of the most coveted spices in ancient times. Therefore, it is now used as flavouring and preservative. So much so that trading empire kept their origin a secret. There are four major cinnamon species, associated with their origins and place of cultivation with slight differences in flavour and texture.

But aside from having that distinctive taste and fragrance that reminds you of rich curries or a visit to your favourite Western-style coffee shop, cultures that come from old civilisations have been using this spice as a medicine for thousands of years. Besides, modern studies have also begun to corroborate such practices.

Using cinnamon to potentially prevent and treat type 2 diabetes is one of the most studied by researchers. In a recent study of 54 prediabetics, a consistent administration of cinnamon three times a day for 12 weeks demonstrated a decrease in fasting plasma glucose (fasting blood glucose). While researchers don’t fully understand the mechanisms, it’s possible that cinnamon could decrease insulin resistance.

2. Great for the brain

Another exciting development is the potential for cinnamon to help improve cognition. Also to protect the brain from ageing-related diseases such as Alzheimer’s and Parkinson’s disease. Possibly related to its mechanism in decreasing insulin resistance, animal models in scientific studies have shown that cinnamon can mitigate the impact of high sugar and high-fat diet on cognition.

In studies related to traumatic brain injuries, cinnamon may also minimise oxidative stress; these studies conclude that dietary cinnamon could well be a key to brain health.

Cinnamon is a good addition to hypertension and high blood pressure management. In a recent, extensive study of nine different clinical trials, research shows that cinnamon supplementation can reduce blood pressure in adults. We know that sipping a mild warm cinnamon tea brings us a feeling of calm, but now we know why.

A recent study on women with dyslipidaemia – a condition of abnormally high bad cholesterol or low good cholesterol – showed an 8% decrease in cholesterol concentration after 8 weeks thanks to cinnamon.

Although Sri Lankan cinnamon comes at a higher price, its essential oil has antimicrobial properties. This is because of the bioactive compounds (Cinnamaldehyde) that are exceptionally good at getting rid of free radicals. Cinnamon’s antibacterial properties can also destroy bacterial cells, rendering them so they are unable to reproduce.

Cinnamon is a great option compared to the many options of gut health food. A recent 2017 study simulated a combination of seven spices including cinnamon in amounts usually found in cooking. It showed that these spices are prebiotic; they promote healthy levels of good bacteria while simultaneously helping against the over-proliferation of bad bacteria.

Cinnamon has strong anti-inflammatory properties that can potentially be therapeutic for inflammation-based diseases such as fatty liver, colitis, and arthritis. Specifically, different compounds within the spice may inhibit pro-inflammatory signalling in cellular pathways that lead to inflammation.

We also spoke to Traditional Chinese Medicine (TCM) physician Lim Sock Ling for a well-rounded review of this powerhouse spice. In TCM, physicians consider cinnamon as pungent and sweet in flavour, while hot in terms of its energetic property.

“Cinnamon invigorates ‘fire’ and enhances yang (hot aspects of the qi energy) thereby dispersing cold from the body. This has the effect of relieving pain, warming the meridians, and invigorating the pulse, guiding the ‘fire’ to its source,” Physician Lim explains.

Cinnamon is beneficial for addressing Yang Deficiency related ailments such as impotence, coldness and pain in the stomach, back, and knees, including menstrual cramps. It’s usually part of a multi-ingredient TCM tonic of dried herbs.

Cinnamon is also a great tonic to improve and maintain kidney health. “However, pregnant women and those with a heaty body constitution or bleeding disorder should abstain from consuming cinnamon,” she reminds us.

Cinnamon does contain coumarin, a compound that can harm the liver and kidney in large quantities. Although the effect is usually reversible. Those taking diabetes medication should also consult their doctor to make sure the amount of cinnamon they are ingesting doesn’t lower their blood glucose too much.

“Also, you should not take cinnamon together with the TCM herb bolus rubra as these two substances can have toxic interactions. Make sure to speak to a trained and certified TCM physician before starting on any regimen,” Physician Lim advises.

You can sprinkle cinnamon on food, steep it in hot water to make tea, or consume it with honey as a remedy for sore throat. In herbal concoctions, you can sprinkle some into the boiling liquid just before turning off the flame.

We hope these seven cinnamon benefits can convince you as to why this sweet-spicy fragrant spice should live in your kitchen cabinet. As cinnamon is a common ingredient in many of our local culinary cultures, now you know why it’s worth its weight in gold.

Flowering plants possess many health benefits. Each flower type has unique properties that make them useful across different medicine systems.