Beneficial Berry Types: Nature’s Jewels You Can Count On

Full of colour, flavour, and health benefits, these berry types are “nature’s candies” that will sweeten your day, guilt-free. 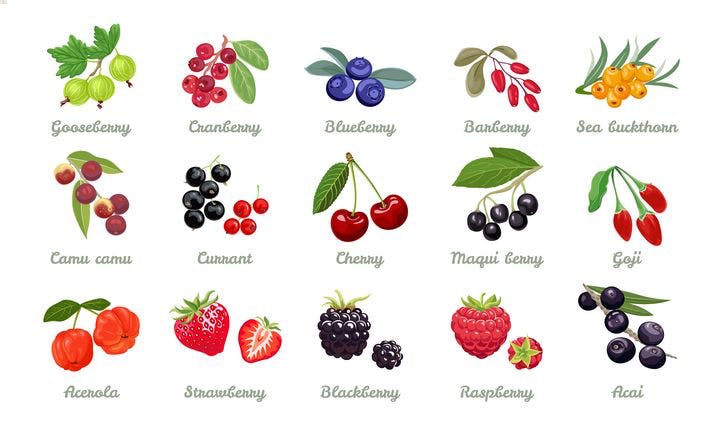 Malaysians are no strangers to the different berry types. Eating fresh strawberries and sipping on berry-flavoured tea and juice concentrates from Cameron Highlands are a few things we’re fond of doing.

The attractive colours, aromas, and flavours of berries, and their potent bioactive compounds, make them stand out from the other fruit groups. Berries contain polyphenols, which divides into the following categories depending on their chemical structure — phenolic acids, flavonoids, anthocyanins, lignans, and stilbenes.

Let’s look at several berry types known to both Western and Eastern medicine.

Goji berries (gou qi, 枸杞) have become quite popular in mainstream medicine, owing to many health and wellness food brands touting its benefits. These small oval-shaped red berries are found in the North-Western regions of China. Furthermore, Traditional Chinese Medicine (TCM) have been using it for a long time before their introduction to Western markets.

Usually, you’ll have to cook these berries prior to consumption. People usually use these berries in Chinese soups, desserts, and herbal teas. Also, goji berries have high levels of healthy that prevent free radicals from damaging the body.

As the links with the eyes, goji berry treats common symptoms like dry, tired, and blurry eyes by tonifying yin and nourishing the blood,” she adds. An animal model study demonstrated that mice treated with dietary goji berry polysaccharides significantly preserved retinal function.

The best way to consume goji berries is to combine them with chrysanthemum (ju hua, 菊花). Sprinkle a few into your soup or onto vegetables as a garnish, or add them into your oats or porridge. You can even use them for Chinese desserts, together with other ingredients like white fungus (yin er, 银耳), lily bulbs (bai he, 百合), and lotus seeds (lian zi, 莲子).

This berry is widely planted in the Asian continent, being native to China. Farmers also cultivate it in Africa, America, Europe, and India. This berry type has a sweet and tart flavour combination. People can sometimes mistake mulberry for blackberries, a completely distinct berry type.

Physician Vong shares that mulberry is a tonic herb for the as it nourishes yin and blood. You can eat it fresh or use it as dried fruit in cooking, such as in a mulberry pudding cake.

Mulberry benefits echo those of other berries, ranging from preventing premature ageing to alleviating constipation. A recent study reported that mice fed with mulberry juice and pulp had greater endurance in a weight-loaded swimming test than the control group.

Anthocyanins in mulberry an antioxidative effect on exercise-induced stress and fatigue. This is echoed in TCM, where mulberry with dried rosebuds promotes blood and qi (vital energy) flow to relieve stress and ease the pain.

This berry type is not suitable for those with diarrhoea or loose stools. This is due to Spleen and Stomach yang (active energy) . Diabetic patients should also refrain from consuming dried mulberries due to their high sugar content.

Hawthorn berry (shan zha, 山楂) is a TCM herb that is well-known and used as a traditional medicine in other parts of the world including Europe, North Africa, and North America. Native Americans have used hawthorn berries and other parts of the plant to treat kidney and bladder diseases. They also use it to ease stomach pain, and stimulate appetite.

In Europe, people use this berry type to treat asthma, pharyngitis, and insomnia. They also use fresh hawthorn as an ingredient in Chinese dishes like tang hu lu (candied hawthorn) or shan zha gao (candied hawthorn cake).

“Hawthorn berries aid indigestion from the overconsumption of meat or fatty foods and overeating. It can improve blood circulation, digest fats, lower blood cholesterol and relax constricted blood vessels. Besides, it can lower blood pressure too,” Physician Vong states.

In one study, polyphenol-rich extracts from various parts of the hawthorn plant showed the ability to promote the destruction of cancer cells in various types of cancer, including breast, cervical, liver, and skin cancer.

In TCM, hawthorn berry is usually taken with other herbs such as orange peel (chen pi, 陈皮) for overeating or included in the xiang sha liu jun zi tang formulation for weak digestion.

Taking hawthorn berry alone for an extended period can have the undesirable effect of weakening qi, so be sure to work with a TCM practitioner when taking these berries for medicinal purposes.

You might not have heard of (wu wei zi jiang guo, 五味子浆果) before. This berry is native to Northern China and Korea; physicians use it in TCM to treat gastrointestinal, respiratory, and cardiovascular diseases. They also use it generally for body fatigue and weakness, excessive sweating, and insomnia.

According to Physician Vong, the schisandra berry enters the Lung, Heart, and Kidney meridians. “This berry tonifies the and preserves essence (jing, 精). It also astringes Lung qi and stops coughing. Hence physicians use this berry to treat chronic cough and asthma,” she explains.

“ astringent aspect also applies in certain cases of diarrhoea where there are Spleen and Kidney yang Deficiencies, or a lack of energy to boost the functions of the Physicians use it to stop excessive sweating, retain bodily fluids, and encourage their production to relieve thirst. They also use it in sweating that is related to hot flush due to yin Deficiency,” Physician Vong elaborates.

Interestingly, recent research also showed that schisandra berry extract protects against osteoarthritis. Specifically, an ethanol extract of the berry has preventive effects against cartilage degradation in a rat model.

This berry is also part of the formulation known as sheng mai san (生脉散) to help nourish qi and yin. You should not take schisandra berries when you have acute respiratory infection internal excess heat, an acute cough, or in the early stages of measles.

The polyphenols in these different berry types make them vigorous and delicious weapons against many modern-day diseases. Both the Western and Eastern medicine acknowledge this. Given the health benefits, it’s no surprise that berries were among the earliest foods that humans gathered in the wild.

Go ahead, grab a handful, and enjoy these beneficial berries for a lifetime of great health. Be sure to consult your healthcare professional before making any major changes to your diet.

It's Taking the Pharmaceutical Industry by Storm, but Does Lianhua Qingwen Actually Cure COVID-19?