7 Cordyceps Benefits for Your Health and Well-Being 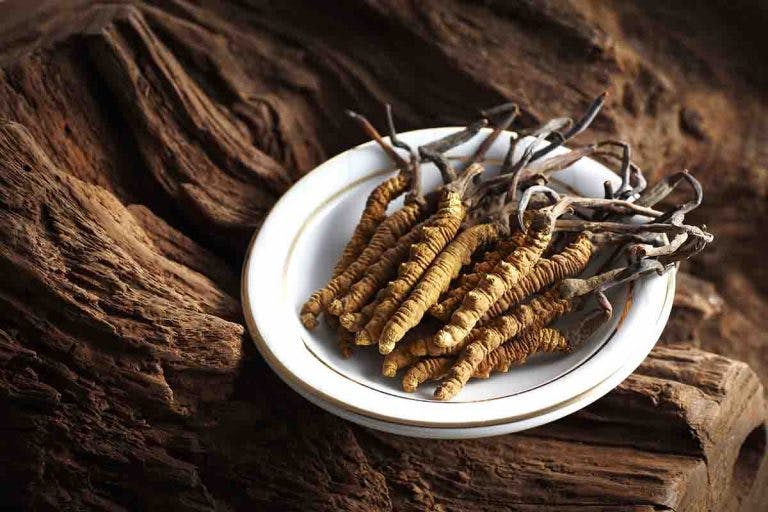 Cordyceps (Ophiocordyceps sinensis) is a type of parasitic fungi that grow on caterpillars in the alpine zone of the Qinghai-Tibet Plateau in north-western and south-western China. In Traditional Chinese Medicine (TCM), its efficacy in preventing different illnesses is one of the most well-known Cordyceps benefits.

However, the production of natural Cordyceps is scarce. This attributes to the difficulty associated with combining insects to the right type of fungi. It is also challenging to harvest Cordyceps at the right time with manual labour. Because of this, the focus shifted towards the cultivation of this highly sought-after herb using biotechnology.

There is a wide range of Cordyceps derivatives on the market. Currently, there are approximately 304 registered products that contain the word ‘Cordyceps’. These products are listed on the Ministry of Health Malaysia’s National Pharmaceutical Regulatory Agency website.

According to Brandon Yew, a physician for Real Health Medical, Cordyceps can boost kidney function and enhance yang energy. It can also improve lung health, thereby helping to manage chronic coughs and breathlessness. It can be stored for up to a year if it is thoroughly dried and tightly sealed in a non-porous packaging and placed in a freezer.

Neither plants nor animals, fungi are a group of organisms that mainly grow in soil or plant material. These organisms include yeasts, rusts, smuts, mildews, moulds, and mushrooms.

Cordyceps is one type of medicinal fungi that have been used in TCM for centuries because it provides a wide range of nutritional and health benefits when consumed. Some of the other popular types of medicinal fungi are reishi, lion’s mane, chaga, and shiitake.

What are Cordyceps Benefits for Your Health?

“From a TCM perspective, it is a tonic to boost kidney function, enhance yang energy, improve lung health, alleviate chronic cough, and breathlessness. From a modern pharmacological and nutritional science perspective, it is potentially anti-ageing and anti-tumour, effective in managing type 2 diabetes, improving heart health, and helping to reduce inflammation,” explains physician Yew.

Before we deep dive into Cordyceps’ benefits, it’s important to note that you should not think of this TCM as a cure-all for different health problems. Rather, you can consider it to be a supplement that can help to improve your overall well-being.

Though, people with too much yang in the body should refrain from using Cordyceps. Symptoms of too much yang include restlessness, insomnia, frequent thirst, constipation, and fast pulse. It is also best to avoid the use of Cordyceps at least one week before undergoing an invasive surgical procedure, as several studies have found that the fungi contain blood-thinning bioactive components. In the same way, people with blood disorders or who are on blood-thinning medications should consult both a medical doctor and TCM physician to ascertain their suitability for Cordyceps consumption. Let’s gain a better understanding of this “Himalayan Gold”!

One of the most known Cordyceps benefits is its ability to increase a person’s tolerance to high-intensity exercises. Cordyceps can enhance blood flow to the muscles and increase production of the molecule known as adenosine triphosphate (ATP). Consequently, these actions can help to boost exercise performance by helping to deliver energy to different parts of the body.

Studies show that Cordyceps use can help to regulate both your innate and adaptive immunity. Innate immunity refers to your body’s first line of defence against harmful foreign invaders. It is a rapid immune response that occurs with minutes or hours upon encountering an antigen and has no immunologic memory. This means that it is incapable of memorising a pathogen should your body be liable to it in the future.

In contrast, adaptive immunity is the body’s defence mechanism that activates after exposure to bacteria, viruses, chemicals, toxins, and pollen. Adaptive immunity uses immunologic memory to learn about a threat and consequently, develop an immune response. Although, the response of adaptive immunity to threats and infections is much slower as compared to innate immunity.

Furthermore, regular Cordyceps use also has a regulating effect on the gut immune system and improving systemic immune function. It can also reduce your risk of contracting infections or diseases.

Cordyceps demonstrates anti-tumour activity through the propagation of T-cells, which can aid in the killing of cancer cells. According to an in vitro study – a study performed using components of an organism that has been isolated from its biological surroundings – Cordyceps use could also inhibit the growth of tumour cells, such as lung, gastric, liver, and ovarian cancer cells.

At the same time, a separate in vivo study – a study performed inside a living organism – found that Cordyceps use was able to stop the growth and metastasis of gastric cancer, breast cancer, Lewis lung cancer, and laryngeal cancer.

Interestingly, a higher production of ATP through Cordyceps use has also shown the ability to strengthen the brain by encouraging a better oxygen uptake. This, in turn, promotes increased blood flow to brain cells and fights mental fatigue.

Cordyceps benefits for the brain also include improving certain cognitive performance markers, such as learning capacity and memory. Alternatively, Cordyceps may also offer protection against brain damage and potentially reduces the risk of cognitive decline due to ageing.

Supports the kidney and lung systems

In TCM, there are 2 general use of Cordyceps. These are to tonify yang energy throughout the body, and enhance the function of the kidneys and lungs.

It can potentially support measures taken to prevent chronic kidney failure and improve sexual function caused by a lack of kidney yang energy.

Cordyceps benefits for a person’s overall well-being include the ability to help manage several debilitating health problems. This is characteristic of the pharmacological effects of Cordyceps, including antibacterial, anti-inflammatory, antioxidant, and libido-enhancing activities.

Some of the health problems that regular Cordyceps use can help to improve include coughs, depression, diabetes, erectile dysfunction, high cholesterol, and upper respiratory tract infections.

Cordyceps use can also help to reduce inflammation in the body. This is evident from the findings of multiple studies, which discovered that extracts of different Cordyceps species could suppress the proteins that could trigger inflammation.

Ultimately, the choice is yours when it comes to incorporating Cordyceps as part of your healthy living regime. For starters, you can choose to drink a herbal tonic that contains Cordyceps and chicken essence. Using fresh whole chicken and extract of Cordyceps Sinensis Mycelia, this supplement is capable of maintaining health because of its easy absorption rate.

How Do You Take Cordyceps?

There are various ways to take Cordyceps. These include tinctures or extracts, powder form or capsules.

Whole or broken pieces of dried Cordyceps are ideal for making a tincture or extract. This is because it only requires minimal preparation. It’s also particularly fitting for people who are always on the go or prefer a hassle-free method of consumption.

Ground Cordyceps into a fine powder, mix it with water or into a smoothie, or brew it into a tea before consuming . This method of consumption is perfect for those who lead an active lifestyle and those who like to kick up their feet and relax with a cup of hot tea at the end of a day.

Like a tincture or extract, Cordyceps capsules also offer easy, hassle-free consumption. In addition, most of these capsules come from manufacturing facilities that have certification from internationally respected regulators. These include Therapeutic Good Acts from Australia, or Good Manufacturing Practices.

It’s worth noting that most capsules found in the market today consists of wild or lab cultivated strains — CS-2, CS-4 and Hirsutella sinensis — of Cordyceps. Although CS-4 used to be called Cordyceps sinensis and was used to produce mycelial Cordyceps products, it has been found to be an incorrect anamorph of Ophiocordyceps sinensis. On the contrary, it belongs to a different fungus called Paecilomyces hepiali.

The One True Cordyceps

Because of this, the anamorph name Hirsutella sinensis has been changed by the International Code of Nomenclature for algae, fungi, and plants to Ophiocordyceps sinensis. In some countries, including Taiwan, only products containing the true strain of Hirsutella sinensis can label their name as “Cordyceps”.

It’s always advisable to seek professional guidance if you plan to consume Cordyceps products, especially on a more regular basis. As one of the potent, tonifying medicinal herbs, Cordyceps is not appropriate for consumption by certain people. For instance, people with existing internal damp-heat, such as when the digestion and fluid metabolism are sluggish or feverish.

Now that you understand the many Cordyceps benefits, you can incorporate them into your diet. Given the prevalence of inferior imitation products in the marketplace, make sure that you purchase your Cordyceps products from trusted, well-accredited retailers.