The benefits of honey span beyond its sweet and heavenly taste. Find out the eight ways honey can be beneficial for your health. 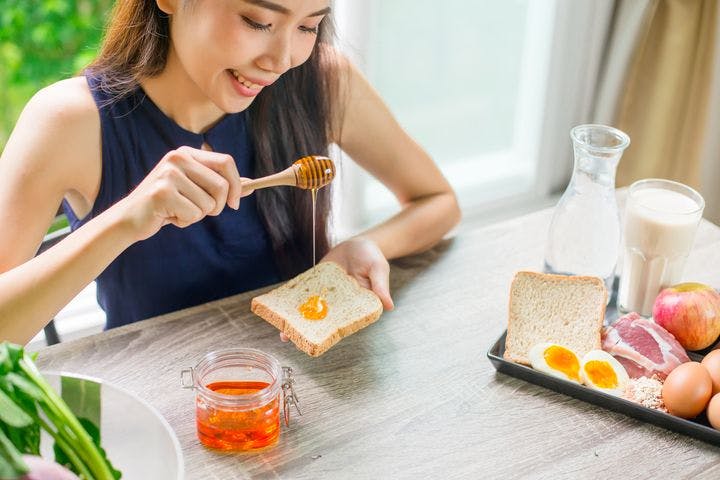 The benefits of honey span beyond its sweet and heavenly taste. Honey may come in many different varieties, but every kind is good for health.

Let’s discover the benefits of honey below!

Types of Honey and Their Differences

Not all honey is created equal. There are hundreds of types of honey around the world and can be differentiated based on their geographical or botanical origins. Their colours and flavours may vary according to several factors such as their harvest time and floral sources.

Five of the most popular honey varieties are:

A sweet liquid produced by bees from the nectar of flowers. One hundred percent natural, raw honey never spoils.

The white, viscous jelly-like substance is secreted by worker bees to feed the hive’s queen bee and honeybee larvae.

The honey produced by bees that pollinate the Manuka bush in New Zealand.

The resinous substance accumulated by bees from plants to seal holes and cracks in the beehive. Brazil produces the highest quality propolis, thanks to its proper climate and environment.

In Malaysia, longan honey is one of the main mono floral honeys, alongside acacia, pineapple, rubber tree and sourwood variants. It is high in antioxidants.

Natural and nutritious, honey is known for its medicinal properties since ancient times. Benefits of various types of honey include:

1. A source of energy

As honey contains glucose or natural sugar, it’s able to provide energy and nourish vital organs in the body.

Royal jelly is the “superfood” that makes a queen bee lives 20 times longer than a normal bee. It is known for combatting the effects of human ageing.

Evidence shows that royal jelly can improve the physical and mental state of older people. Following an experiment on rats, a study conducted by researchers from the Nagasaki University Graduate School of Biomedical Sciences has shown that royal jelly possesses neuroprotective effects in Alzheimer’s patients.

A 2019 study published in a journal for the National Center for Biotechnology Information has stated that the mechanisms behind royal jelly’s anti-ageing properties are still unclear. Even so, most studies attribute them to two of royal jelly’s components, 10-hydroxydecanoic acid (10-HDA) and major royal jelly protein (MRJP).

Another 2019 study by researchers in Japan and Egypt on royal jelly and its components suggests that royal jelly can also encourage collagen production to enhance skin repair. Likewise, propolis can promote collagen synthesis, thanks to one of its components, fibronectin.

Common honey is also effective in regenerating skin tissue. It is said that the bacteria in wounds prefer to metabolise the glucose in honey. Try applying honey to wounds to promote a faster healing process.

Hormones such as testosterone, progesterone, prolactin and estradiol are present in royal jelly. It’s no wonder royal jelly is widely used as a natural remedy for hormonal imbalances that occur in women who experience premenstrual syndrome and menopause.

Studies in male animals have found that one of the benefits of royal jelly is that it supports fertility, semen quality and output and the concentration of testosterone in men.

Besides preventing ageing, 10-HDA in royal jelly also helps boost the immune system due to its immunomodulatory properties.

Additionally, propolis has been discovered to possess antiviral activities. A 2020 study by American and Brazilian researchers found that propolis has some preventive effects against COVID-19. The study stated that propolis’ components of caffeic acid phenethyl ester, galangin, chrysin and caffeic acid can interfere with the virus’ invasion of the host cell. This makes it a viable therapy to reduce COVID-19 infection.

Royal jelly has an anti-inflammatory and anti-tumour role, as proven in a 2020 study published by Spandidos Publications. It demonstrated that the intake of royal jelly orally can decrease serum levels of TNF-α, the major mediator of cancer-induced inflammation.

Similarly, propolis has the same anti-inflammatory and anti-tumour benefits. Various studies including one done by a researcher at International Medical University Malaysia in 2011, have revealed that propolis may be feasible to treat breast cancer and melanoma by inducing apoptosis. Apoptosis or programmed cell destruction, which was initially considered the cause of cancer, is now deemed a treatment strategy.

Studies such as one published by Oxidative Medicine and Cellular Longevity Journal in 2015 have revealed that honey contains high levels of prebiotics to aid the body’s digestive process.

In Manuka honey, a component called Methylglyoxal (MGO) gives it its strong antibacterial prowess. Its treatment of stomach ulcers caused by Helicobacter pylori bacteria has been known to have positive results. There is also evidence of Manuka honey taken with an empty stomach easing symptoms of inflammatory bowel syndrome.

Furthermore, because of its antiviral function, symptoms of gastrointestinal disorders have been reported to be successfully remedied with propolis.

One of the benefits of honey is that it is anti-inflammatory, anti-viral and anti-fungal. Manuka honey, for example, is an effective treatment if you have a sore throat. What’s more, the consumption of honey is also a trusted remedy for a persistent cough.

Propolis is used to treat vaginal infections because of its antibiotic, antimycotic and anaesthetic roles.

Is Your Honey Genuine?

To truly reap the health benefits of honey, you need to get your hands on genuine honey products. Here’s how to know if the honey you’ve purchased is real:

Sweet yet strong, the benefits of honey on your overall health can be boundless. Try it and start seeing its effects.

This is an adaptation of an article, “Honey Varietals for Family”, which first appeared on the Eu Yan Sang website.

Going Gluten-Free? Here are the Benefits and Risks

A gluten-free diet is essential for some people. It has gained popularity recently due to certain medical needs, including wheat allergy and celiac disease. Learn how to balance going against the grains.

The Cause of Obesity: 5 Body Constitutions That Trigger Weight Gain

The cause of obesity correlates to a person's body constitution. In the same way, body types can also present with other negative symptoms.

One of the most prized flowers in Asia, the chrysanthemum flower offers many health benefits, making it a go-to herbal remedy for centuries.

Food poisoning causes vomiting, nausea and diarrhoea and can throw the body off balance. Relieve the symptoms and recover with these natural remedies.