Raynaud’s Phenomenon: The Disease That Turns Your Skin Blue

A notable sign of Raynaud’s phenomenon is a change of colour in the fingertips and toes. It can also affect other parts of the body as well. 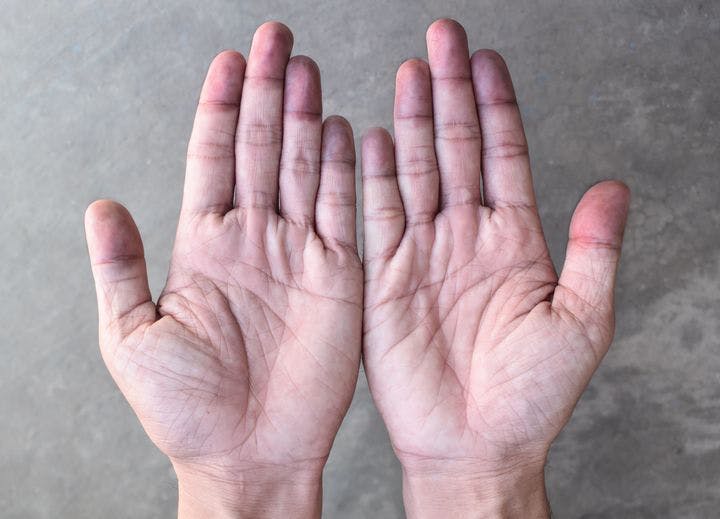 Named after Maurice Raynaud, Raynaud’s phenomenon is a term coined in 1862 to describe the first episode of vasospasms – an obstruction of blood flow due to narrow brain blood vessels – involving the fingers and toes. Sometimes, it can also affect the nose, lips, ear lobes and even nipples, turning them cold, numb, and a purple or bluish shade.

The causes of Raynaud’s phenomenon are yet to be determined. In addition, the disease is not treatable but manageable with a combination of clinical and alternative modalities. Let’s discover possible risk factors of the disease and steps to suppress its symptoms effectively.

Primary Raynaud’s is milder and more prevalent than Raynaud’s. The former occurs in 75% of women between the ages of 15 and 40 and is less severe than the latter. People who develop Raynaud’s also rarely develop related health conditions.

Secondary Raynaud’s is common in people with connective tissue diseases. These can reduce blood flow to the fingers and toes, resulting in thickened blood vessel walls.

Usually, a person’s body who is exposed to low temperature will respond by slowing heat loss. It’ll induce the blood vessels to move blood from the surface arteries to the deep veins.

However, this normal body response will intensify in people with Raynaud’s phenomenon. It’ll contract the small blood vessels linked to the fingers and toes, prompting skin discolouration. Separately, emotional stress can also have the same effect on these limbs.

Traditional Chinese Medicine (TCM) believes that the Heart ensures optimal blood circulation while the Lungs support the Heart’s circulatory function. Meanwhile, the Spleen produces blood and governs the limbs and extremities – an appendage of the body like the feet and hands. The store primordial qi (vital life force) and yang (active energy).

According to Brandon Yew, at Real Health Medical, “Deficiencies of Blood, Qi and Yang in the Heart, Spleen, Lungs and Kidneys will enable pathogens to accumulate or form within the meridian channels. These include Cold, , Dampness, Blood Stasis and Qi Stagnation. They disrupt blood and qi circulation to the extremities.”

3 Things to Help You Cope with Raynaud’s Phenomenon

To properly diagnose the disease, a healthcare provider may perform a cold stimulation test. It’ll require you to place your fingers in an ice water bath. If the colour in your hands and fingers change, it can indicate Raynaud’s phenomenon.

Next, you will undergo a diagnostic test called a nailfold capillaroscopy – a study of capillaries under a microscope – to differentiate between the two types of Raynaud’s phenomenon.

Out with the cold, in with the warm

The best way to fend off Raynaud’s phenomenon is to refrain from consuming cooling foods and beverages. It’s also advisable to avoid activities performed in a cold environment.

Some of the foods and beverages that need to be limited or avoided are:

Try to steer clear of air-conditioned spaces, cold baths or showers, or water sports and activities. Instead, you should expose your skin to morning or evening sunlight for up to ten minutes daily. Taking warm baths or showers or visiting the sauna occasionally can also help.

The use of medication is more frequent among people with Secondary Raynaud’s phenomenon. Calcium-channel blockers are the safest and most effective medications for relaxing smooth muscles – involuntary muscle tissues that have many functions – and dilating the small blood vessels. These have been found to reduce the frequency and severity of symptoms in two-thirds of people with the disease.

Alpha-blockers can be used to prevent norepinephrine hormones from shrinking blood vessels. Vasodilators relax blood vessels and can be applied to the fingers to heal skin ulcers.

Herbal formulas can support the suppression of Raynaud’s phenomenon symptoms by correcting specific body constitution imbalances. Examples of these are:

Applying pressure to certain points on the meridians, too,. A few of the acupressure points that can benefit the body are:

While Raynaud’s phenomenon is an incurable disease, early intervention can help you be more mindful of their triggers and be able to recognise the steps to help manage symptoms.

Traditional formulas should be considered after speaking to a licensed TCM practitioner. It will enable you to identify the modalities suitable for your body constitution and evade the detrimental effects of self-medication.

Natural remedies may be the answer to your skin whitening needs, especially when the components in products prove too harsh on the skin.

Ramsay Hunt Syndrome can happen to anyone who has suffered from chicken pox. Know the treatment options in Western and Traditional Chinese Medicine.