Diabetes relates directly to multiple skin diseases. If left untreated, these can lead to permanent scarring of the skin surface. 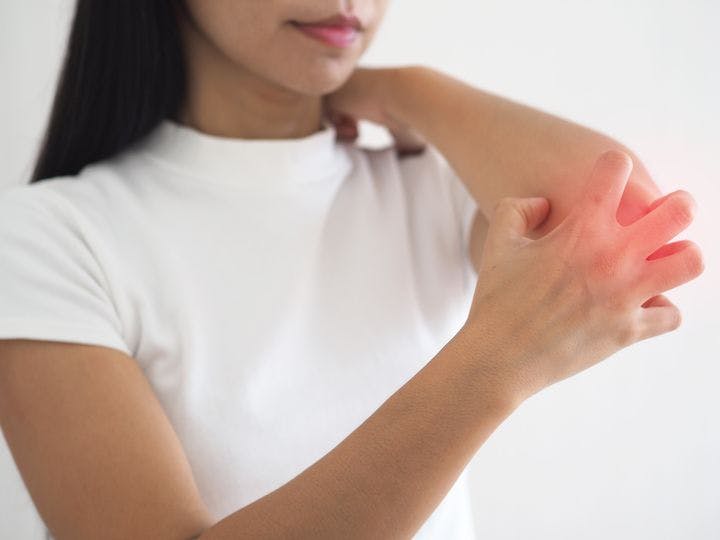 Skin diseases can affect healthy people but are more prevalent in people with diabetes. These include rashes and bacterial and fungal infections, which affect up to 30% of people with diabetes. Type 2 diabetes, in particular, also doubles a person’s risk of developing psoriasis – a skin disease with symptoms like rashes and scaly patches on the trunk, scalp, knees, and elbows.

Read on to learn about these skin diseases and the steps to prevent indefinite skin scarring.

This rare skin disease usually develops in young or middle-aged adults and is three times more common in women than in men. Type 1 diabetes also makes a person more vulnerable to necrobiosis lipoidica diabeticorum than people with type 2 diabetes.

It starts as plaque or a raised area of dull, red skin that normally develops on the lower part of the legs. Over time, it’ll turn yellowish-brown and shiny and have a violet-coloured border. The blood vessels under the skin may also become visible. It occurs due to collagen degeneration and inflammation associated with the thickening of blood vessel walls and fat disposition.

One-third of people with type 1 diabetes have digital sclerosis. The disease turns the skin on the back of the hands, toes, and forehead thick and wax-like. It can also stiffen finger joints, restricting them from moving as freely as they should. In some cases, the knees, ankles, and elbows can also become stiff.

Acanthosis nigricans is linked to diabetes and insulin resistance but can also arise from other underlying factors, such as:

It generally presents as hyperpigmentation of the skin folds. The affected skin might be itchy, have an odour and develop skin tags. Examples are the groin, underarms, or back of the neck. Sometimes, it can also appear on the hands, elbows, and knees. Skin thickening in these areas may also happen.

It’s uncommon for people with diabetes to develop bullosis diabeticorum or diabetic bullae (better known as diabetic blisters). However, it can present in people during early-stage diabetes or as an effect of long-term diabetes in those who do not control blood sugar well.

The risk of diabetic blisters is higher among men with type 1 diabetes who are between 50 to 70 years of age. The sores can appear on the backs of a person’s fingers, hands, toes, feet, legs, or forearms. These can grow up to five centimetres but are painless.

Eruptive xanthomatosis refers to yellow and firm pea-sized lumps that may itch and have redness around the affected area. Symptoms of this disease can occur on the back of the hands or the feet, arms, legs, and buttocks.

Ways to Address Diabetes-Related Skin Diseases Before They Cause Scarring

Refrain from taking hot baths and showers. If your skin is dry, bubble baths too, are discouraged. Instead, use a moisturising soap and lotion. Take note not to rub it between the toes, as added moisture in the area encourages fungus growth.

If you sustain a minor cut, wash it immediately with soap and water and cover it with sterile gauze. Deeper cuts, burns, or infections should only be treated by a clinical physician.

To alleviate skin-related symptoms, a person must first determine, together with a TCM physician, their stage of diabetes. Certain herbal formulations can help with easing symptoms so do consult your physician before taking any of these.

During the early stage, diabetes will provoke Blood and Qi Stagnation, inducing Heat accumulation and making the skin itch. Hence, it’s advisable to use catnip (mao bo he, 猫薄荷), as it cleanses the body’s blood and qi, promotes a better flow of the latter and relieves itching.

As the disease progresses to the middle stage, Stagnation can bring about an abnormal metabolism and accumulation of bodily fluids, resulting in pus. As such, it’s recommended for people with diabetes to consume psyllium (yang che qian zi, 洋车前子), which can reduce blood sugar levels. Another herb that is effective in removing water is Plantago asiatica (che qian zi, 车前子), which is a diuretic.

Turbid pathogens can turn into Heat in the later stages of diabetes, causing your skin to become dry and itchy. These symptoms can worsen if you are exposed to heat or when night falls. It can be accompanied by dry stools, mouth dryness, or a bitter taste in the mouth. To correct symptoms of late-stage diabetes, nourish yin, and eliminate Heat, use Rehmannia (sheng di huang, 生地黄), dwarf lilyturf (mai dong, 麦冬), figwort root (xuan shen gen, 玄参根), and Kudzuvine root (ge gen, 葛根).

An early diagnosis helps people identify the skin diseases related to diabetes and suitable interventions that’ll help ease their specific symptoms. Do bear in mind that the above herbal formulas are dependent on varying body constitutions. Speak to a TCM practitioner if you’re considering natural, alternative remedies and avoid self-medicating. In doing so, they’ll be able to advise you on the appropriate herbs to use and prevent contraindications.

Leptospirosis Symptoms: What to Know About This Bacterial Infection

Leptospirosis symptoms may turn serious if they're not detected and treated in time. Here’s how traditional and Western medicine treat the condition.

A Tale of Two Diseases: Cold and Flu Medicine, Causes and Symptoms

Do you know what you have? Here we break down the symptoms, causes, and the cold and flu medicine to take. Read more to understand the difference.

5 Ways to Slow the Progression of Diabetic Retinopathy

Diabetic retinopathy is a complication of raised blood sugar levels. If left untreated, it can lead to permanent vision loss.