How to Cook Green Vegetables Without Losing its Nutrients 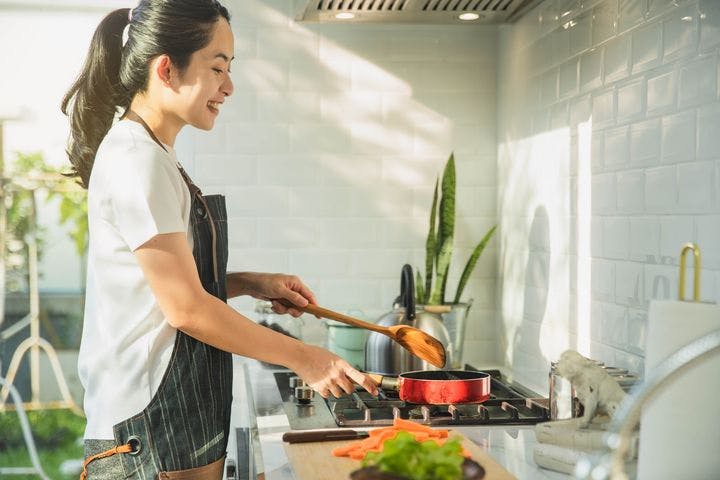 health or dietician will usually advise you to consume green vegetables daily to maintain optimal well-being. Whether for health or social reasons, some people have taken this a step further by becoming vegan or vegetarian, or even following a raw vegan diet.

A raw vegan diet consists of uncooked or heated food at temperatures below 40 to 47 degrees Celsius. It’s derived from the idea that cooking food destroys its nutrients. While there is some truth to this notion, it’s not entirely true as some vegetables are more nutritious when cooked. So, what’s the best way to prepare green vegetables without losing its benefits and nutrients?

This article delves into how to prepare green vegetables so you can when it comes to cooking them.

It’s common knowledge that drinking water is essential for the human body. Unfortunately, when it comes to preparing vegetables, water can be disadvantageous. Because vitamins such as vitamin C, foliate and niacin in vegetables are , they dissolve when cooked or boiled. Leftover water would also usually be drained out, taking vitamins away with it.

Furthermore, cooking requires heat, which is another element that can reduce the nutrients in vegetables. However, heat can also help break down their cell walls and fibres, making them easier to chew and digest.

In Traditional Chinese Medicine (TCM), is considered yang (Heat). The process dries, hardens and shrinks food. This makes food more difficult to digest, and it’s recommended that people who are in nature avoid this method of cooking.

Conversely, cooking with water adds more yin (cold) to food. It moistens, expands and softens food, making it easy to digest and it’s a better cooking method for all types of body constitutions.

Here are some popular cooking methods for green vegetables, and what’s best for which.

TCM views as neutral. It doesn’t change the energy of the vegetables cooked much and helps nutrients well.

According to a report published in 2009, researchers investigated the effects of five popular methods of preparation – boiling, microwaving, steaming, stir-frying, and – on broccoli. The result showed that steaming caused the lowest loss of the health-promoting compounds.

Boiling green vegetables in water according to TCM warms the vegetables allows to flow into the water, which isn’t ideal. If boiled in too much water, it reduces the yang of the vegetables. This method is best for making soups and stews (stewing) so that the liquid is consumed rather than discarded.

This method of cooking, however, is great for root vegetables. A study in the Journal of Agriculture and Food Chemistry revealed that consuming cooked carrots is much better than raw. Instead of destroying nutrients, cooking can increase the level of beta-carotene. A component in carrots, beta-carotene is converted into vitamin A, which makes carrots the go-to food to maintain eye health.

In the same year, the journal published a study on tomatoes. It showed that cooking could boost the lycopene in tomatoes, a red pigment found in tomatoes and reddish-coloured fruits, which is a powerful antioxidant.

This is also supported by the findings from the Food Science and Biotechnology journal. Certain cooked vegetables have higher contents of fat-soluble vitamins such as beta-carotene.

Frying and stir-frying green vegetables gives it yang energy in TCM. Cooking with high heat for a short amount of time retains the crunchiness of the vegetables (yang) but keeps the inside soft and retains the water content (yin) and nutrients.

In TCM, grilling allows green vegetables to develop a strong yang and warming effect. However, this method of preparation may cause the development of toxic substances in food and should be less frequently.

Griddling is a method of cooking where food is heated on a flat iron pan. A 2009 study published in the Journal of Food Science states that griddling might produce the lowest losses of antioxidants in many kinds of vegetables. Additionally, the study also mentioned that boiling and pressure cooking might lead to the biggest decrease in antioxidant activity.

A 2019 research study agreed that griddling, as well as frying, is the preferred way to cook tomatoes and retain high antioxidant activity.

According to TCM, baking helps increase yang energy and can balance the cooling effect of cold food (vegetables or raw foods). Roasting green vegetables makes it more warming and when combined with oil or fat can create Damp Heat.

With all the available cooking methods, it can be concluded that green vegetables will lose their nutrients the most when cooked in a lot of heat or with liquid. The key is choosing the methods that use the such as steaming and stir-frying. Alternatively, you can make a vegetable stew or soup, so you don’t have to throw out the nutrient-filled water the greens are cooked in.

How you choose to prepare your vegetables should be what produces the best taste and texture for you. Being able to enjoy your vegetables is important, so you can incorporate them in your diet and not feel like it’s a chore.

This is an adaptation of an article, “烹饪蔬菜最佳的方法?”, which first appeared on the Health123 website.

Food poisoning causes vomiting, nausea and diarrhoea and can throw the body off balance. Relieve the symptoms and recover with these natural remedies.

Herbal Medicine 101: A Guide to Buying, Consuming, and Storing

Herbal medicine is well-known for its healing properties. Taking the right steps when storing and using herbs ensure a longer shelf life and maximum efficacy.