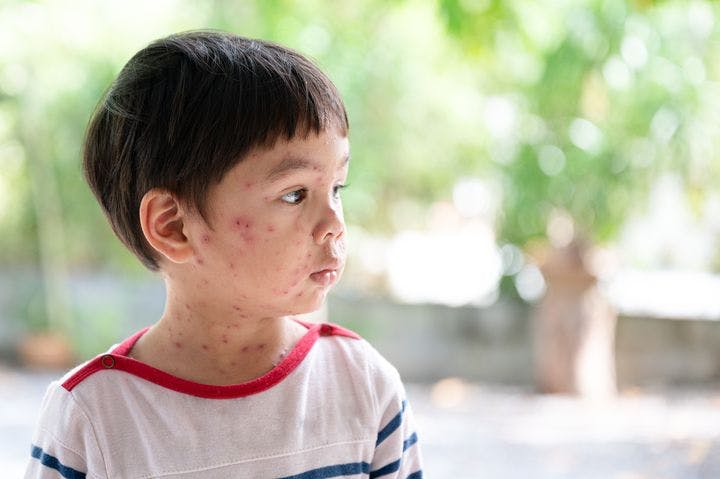 The varicella zoster virus has been with humans for as long as we can remember. Over 90% of people will have their first varicella zoster infection, also known as chicken pox, before they’re teenagers. Once infected, the virus lives forever in the nerves, dormant. It may however flare up again in adulthood, presenting as shingles or herpes zoster.

While it is reported that adults may have more severe chickenpox symptoms than children, the itchy fluid-filled bumps and blisters can be a great discomfort for adults and children alike. Read on to learn more about the varicella zoster virus and natural remedies to help you and your little ones get through this very itchy viral infection.

Varicella Zoster Infection: What It Is

Common symptoms of chickenpox include the characteristic blisters, fever, aches, sore throat, headaches, and stomach aches. In short, it can be quite miserable. While the varicella zoster virus causes both chickenpox and shingles, it is quite rare for children who have already had the primary infection (chickenpox) to then have shingles. Instead, shingles is an outbreak of the varicella zoster virus in an adult who has had chickenpox before. Shingles or herpes zoster is caused by certain triggers, including a weakened immune system and stress.

Chickenpox is highly contagious. The virus is spread through virus-filled droplets in an infected person’s cough or sneeze, as well as virus-filled fluids in a ruptured blister. Once infected with the virus, the incubation period could be as long as a couple of weeks, and a child or a person with a primary infection is contagious even before the first blisters appear.

While considered a common childhood infection and, mistakenly, a way to boost a child’s immune system, varicella zoster can still cause severe illness, and is not to be taken lightly.

In severe cases, it can cause pneumonia, brain damage, and in some cases, even death. Pregnant women and their foetuses are especially at risk of developing severe diseases.

If you haven’t had chickenpox, the best step to defend yourself against this highly contagious virus is to get the chickenpox vaccine. Unlike smallpox, an even more severe illness caused by a different virus that has been eradicated through a successful global vaccination program, the chickenpox virus is still among us.

The “usual suspects” of medicines such as paracetamol to help with pain and fever (it’s not advised to use aspirin or ibuprofen as they’re associated with Reye’s syndrome and bacterial skin infections), calamine lotion, and antihistamines can help with the itching. If you’re seeking natural solutions, here are five other remedies that can help you or your little one gets through the itchiest part of the infection.

The compounds in oatmeal are very soothing to the skin due to their antioxidant and anti-inflammatory properties. Ground up some oatmeal in your food processor to make colloidal oatmeal and add this powder to the bathwater. Oatmeal has many skin-soothing properties, forming a protective barrier of moisture for your skin, and helping ease the itching.

Another bath remedy is to add a little bit of baking soda to the bathwater. Baking soda has long been used to help with itchy rashes due to its anti-inflammatory and antiseptic properties. As with the oatmeal bath, take care not to use hot water, but warm or cool water instead. Pat dry, don’t rub, so as not to aggravate the blisters.

Cool compresses can also help with the itching by calming the nerves that are reacting to the stimulation caused by the virus. The cooling effect of a compress can also be enhanced with calming herbs like chamomile, which is also antiseptic and anti-inflammatory. Brew a few teabags of chamomile tea, let cool, and then use a cotton pad or clean towel to dab the tea onto the blisters.

“In Traditional Chinese Medicine (TCM), varicella zoster is considered a pathogen that can more easily instigate a robust or severe reaction by your immune system caused by pathogenic Dampness, Wind, and Heat,” explains TCM physician Kong Teck Chuan. Lingzhi or reishi is a medicinal mushroom that has the effect of modulating your immune system so that your body doesn’t overreact to the virus by making extremely itchy rashes.

Do work with your TCM practitioner to find a suitable formulation.

Qing Re Jie Du Ji (清热解毒剂) is a herbal formulation in TCM that has the effect of clearing heat and reducing toxins. An analysis of randomised controlled trials in China looking at these kinds of formulations has shown that they tend to work better than Western medicine alone in treating chickenpox in children. Do speak to your TCM practitioner to find herbal formulas that work best.

While the current vaccine against varicella zoster does help reduce the severity of an infection, the virus is very much still with us. If you or your child get chickenpox, take care to rest, remain hydrated, and ease the itching with these remedies. Here’s to an itch-free recovery.

Feeling the Itch: What to Do if Your Baby Has a Heat Rash

Malaysia’s hot and humid weather can prompt a heat rash in babies. Taking steps to prevent sweating and keep the skin cool can ward off the condition’s onset.

Ways to Prevent Eye Problems in Babies and Children

A good vision plays an important role for children. Keeping your children’s eyes healthy allows them to thrive in the environment they are living in.

Goodbye Fussy Eaters: 3 Expert Tips to Be a Pro at Baby-Led Weaning

Baby-led weaning helps with a child's motor and social development and raises less picky-eaters. Get started on the journey with this guide.

Growing Pains: What is Precocious Puberty and How to Treat it

The incidence of precocious puberty has increased in recent years. Here is how to identify the symptoms and get treatment.

Children experience numerous physical changes during a growth spurt. Learning how to grow taller naturally plays an important role in this process.