Reviewed by Physician Chu I Ta 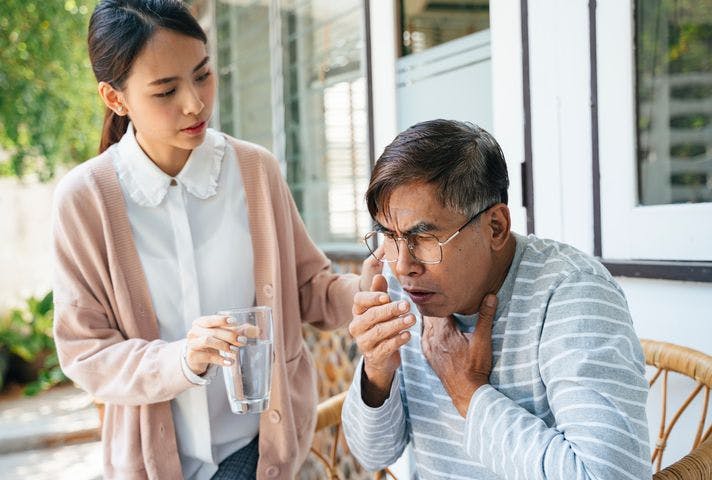 Lung cancer accounts for about 10% of all malignant cancers in Malaysia. Almost 90% of sufferers are diagnosed in the later lung cancer stages of three or four.

Read more to learn about lung cancer stages and the signs to watch out for at each stage.

Lung cancer occurs when cells in your lungs mutate and grow uncontrollably. They develop that interfere with your body’s normal functioning. One cause of lung cancer includes exposure to harmful substances such as through smoking or inhaling second-hand smoke, asbestos, radon or radium, and a host of other harmful chemicals. Having a relative with lung cancer also increases your risk.

The more common of the two main types of lung cancer is non-small cell lung cancer (NSCLC). This accounts for about 80% of cases. Within NSCLC, there are four general stages of the disease, though some descriptions also include Stage 0 prior to Stage I.

Cancer cells are found only in the top-most lining of the lung or bronchus and hasn’t spread. Outward symptoms are rare. Surgery is usually enough to cure this very early stage of the cancer if the patient is healthy enough. Photodynamic therapy, laser therapy, and brachytherapy (internal radiation) are alternatives to surgery.

A appears in one lung but hasn’t spread to the lymph nodes. This stage is further divided into Stage IA and Stage IB, depending on the size of the tumour. Outward symptoms are rare, but may still appear, such as coughing, sometimes with blood.

Depending on the patient’s health, complete removal of the tumour through surgery provides the highest chance of preventing the cancer from reoccurring. Adjuvant chemotherapy may be prescribed to further lower the risk of recurrence. Alternatively, radiation therapy may be used for the same purpose. For tumours that measure four across, immunotherapy is another treatment option. Certain medicines are used to help the immune system recognise and destroy cancer cells.

In stage II, tumours are larger than those in stage I. They would have begun spreading within the lung, but not to distant organs yet. This stage is further divided into Stage IIA and IIB, depending on the size of the tumour, location, and whether it has spread to the lymph nodes.

Symptoms are prominent such as a cough that won’t go away, wheezing, chest pain, hoarseness as the tumour presses on the laryngeal nerve and a bloody cough as the tumour begins affecting the blood vessels. There is also unintentional weight loss as the cancer begins to tax the body’s energy reserves.

Treatment options follow the same logic as stage I options, which is to get the cancer into remission. Some patients may also have certain gene mutations that make them a candidate for some targeted therapies such as a particular drug that can target the mutated cancer cells.

The most advanced stage of lung cancer where the cancer has metastasised. This means it has spread to the lining of the lungs or other areas of the body including distant organs.

At this stage, treatment is primarily aimed at managing symptoms, as curing the cancer is very unlikely. Treatment options include all the other options available in earlier stages, depending on the health of the patient.

Small cell lung cancer (SCLC) is less common, but spreads more rapidly and has usually spread to other parts of the body upon diagnosis. Because of this, SCLC only has two stages:

Holistic approaches such as Traditional Chinese Medicine (TCM) can support cancer treatment, with evidence mounting as to its effectiveness. We speak to TCM Physician Chu I Ta who lays out different TCM remedies based on the cancer treatment type.

Radiotherapy uses x-rays to kill cancer cells, which can leave the patient feeling tired and weakened. They might be suffering from TCM syndromes such as toxic Heat and Stasis/Stagnation that include symptoms such as fever, ulcer, sore throat, chest pain, cough, vomiting, headache, and constipation. For these ailments, a TCM practitioner may consider Qing qi hua tan tang (清气化痰丸) and Tao hong si wu tang (桃红四物汤) decoctions. Qi and Yin deficiency may also result, leading to dry mouth, reduced appetite, bloody coughing, chest tightness, shortness of breath, and paleness. For this, Physician Chu recommends the Bai he gu jin tang (百合固金汤) decoction.

it brings, especially nausea and vomiting. “TCM recognises this as the incoordination of and Stomach, resulting in gastrointestinal reactions to the such as distention, weak appetite, nausea, indigestion, and . For these symptoms, I recommend Xuan fu dai zhe tang (旋复代赭汤) and Ju pi zhu ru tang (橘皮竹茹汤),” he further shares.

TCM formulations used for Qi and Blood Deficiency after surgery may also be used here. A patient may also be inflicted with Liver and Kidney Yin Deficiency, for which Physician Chu recommends Liu wei di huang wan (六味地黄丸).

Targeted therapy can cause skin rashes due to Heat and Toxin Blood Stagnation. The TCM formulation Qing wen bai du yin can help with this. If an epigastric reaction also occurs, the patient may be prescribed Shen ling bai zhu san (参苓白术散).

A lung cancer diagnosis is evidently a scary and worrying matter, but catching it early can help prevent it from advancing to the later lung cancer stages. Together with treatments offered by Western medicine, holistic supportive therapies like TCM can hopefully help make your journey to healing a little more bearable.

Recovering from Colorectal Cancer: A Journey of Health and Healing

Treatment of colorectal cancer can affect your health and leave you weak. Learn how to support your treatment with herbal remedies.

Fibromyalgia symptoms are both physical and psychological. These are not life-threatening but can impair a person’s ability to function normally.

What Are Ovarian Cysts and Should You Worry About Them?

Ovarian cysts are masses in or on the ovaries, which are usually benign. However, they may cause problems at times. Here is all you need to know.