Diabetic Foot Ulcer: How to Protect the Limb from an Infection

People with a diabetic foot ulcer are vulnerable to infection. Not treating the condition promptly can result in amputation. 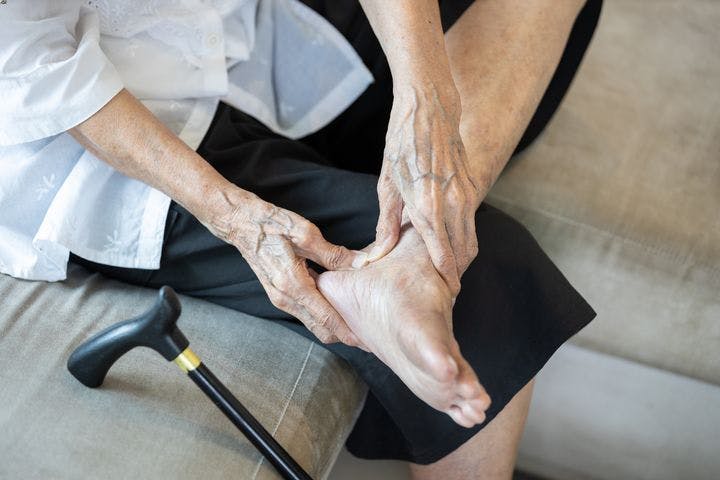 Hence, taking swift actions to prevent or manage this foot disorder is necessary to prevent an infection or amputation and improve a person’s quality of life. Here are the risk factors of a diabetic foot ulcer, and ways to treat it before it’s too late.

The Risk Factors of a Diabetic Foot Ulcer

Notable reasons behind a foot ulcer in people with diabetes are peripheral neuropathy, peripheral arterial disease, or various foot traumas. It’s worth noting that foot ulcers can also stem from a combination of these factors.

Neuropathy is a well-known factor in most diabetic foot ulcer cases. The disease damages nerves, thus impairing the motor, sensory and autonomic fibres.

A loss of sensation in the feet can increase a person’s risk of sustaining injuries. It can come from internal or external causes. These include:

Injuries may appear undetected during the initial stages, and consequently trigger foot ulceration.

This disease impacts the segments between the ankle and knee. It can be up to eight times more prevalent in people with diabetes. In addition, it’s a predictor of foot ulceration, especially in people who suffer minor injuries with infection complications.

Structural foot deformities and abnormalities – flatfoot, claw toes, hammer foot, hallux valgus, and Charcot neuropathy – play a central role in the formation of ulcers. It can be attributed to abnormal plantar pressure, which predisposes the feet to ulceration.

In Traditional Chinese Medicine (TCM), a diabetes-related foot ulcer is also known as diabetic gangrene. It’s also an advanced stage of the disease, and can be broken down into multiple Deficiency and Excess syndromes.

“The primary pathogenic factors of all chronic diseases during the latter stages possess a Deficiency syndrome, while the secondary factors of a chronic disease are considered Excess syndromes,” explains Real Health Medical TCM Physician Chu I Ta.

Deficiency syndromes which are linked to a diabetic foot ulcer are blood and qi (vital life force) Deficiency, qi and yin Deficiency, and yin and yang (active energy) Deficiency. Meanwhile, Excess Syndromes can be classified as Damp-Cold Obstructing the Collaterals, Blood Vessel Stasis and Obstruction and Excessive Damp-Heat Toxin.

How to Prevent the Occurrence of a Foot Ulcer

Proper foot care and the management of minor injuries can help prevent ulcer formation. A daily inspection of the feet is mandatory. Gently cleanse and dry them at least once a day.

People with diabetes should also use shoes with socks indoors and outdoors, and stay away from heating pads.

How to Treat a Foot Ulcer and Avoid Infection

If a person does develop a foot ulcer, the main objective of clinical treatment will be to heal the wounds as soon as possible. Separately, a TCM physician will propose the use of herbal formulas and ingredients that address the distinct syndromes of a foot ulcer.

Ease the pressure off the injured area

Also known as ‘offloading’, this treatment step promotes the use of a brace, wheelchair, crutches, or specialised footgear or castings. In doing so, a person can reduce the pressure and irritation on the foot ulcer area.

Remove dead skin and tissue from the ulcer

Debridement may help with the removal of surface debris and necrotic tissues. Necrotic tissues are characterised by the death of a localised area of living tissue. This process will improve the healing of chronic wounds by encouraging the production of granulation tissue.

Surgical debridement uses scalpels to rapidly remove hyperkeratosis and dead tissue. The tip of a scalpel has to be pointed at a 45˚ angle to remove non-viable tissues and achieve a healthy, bleeding ulcer bed. Enzymatic debridement uses agents like papain – a proteolytic enzyme from raw papaya – crab-derived collagenase and krill collagen to remove necrotic tissue without damaging healthy tissue.

Early intervention is the best way to lower the risk of a person’s diabetic foot ulcer exacerbating and becoming infected. If you wish to consider using herbal formulas to regulate imbalances, speak to a TCM practitioner beforehand.

4 Types of Period Pain That You Should Be Aware of

This article discusses the types of period pain or menstrual cramps, also known as dysmenorrhea, their causes, and prevention.

Living with Ulcerative Colitis: What You Can Do

A lifelong disease, ulcerative colitis, can disrupt a patient’s quality of life. Here are several ways you can manage the disease and prevent flare-ups.

What Causes Male Pattern Baldness and How to Treat It

Male pattern baldness can cause a receding hairline. If left untreated, the condition will likely result in permanent hair loss.

How to Take Care of Your Vocal Cords (and Sing like a Diva!)

Vocal cords are delicate and easily strained if they are not well taken care of. Discover tips to take care of your vocal cords in this article.